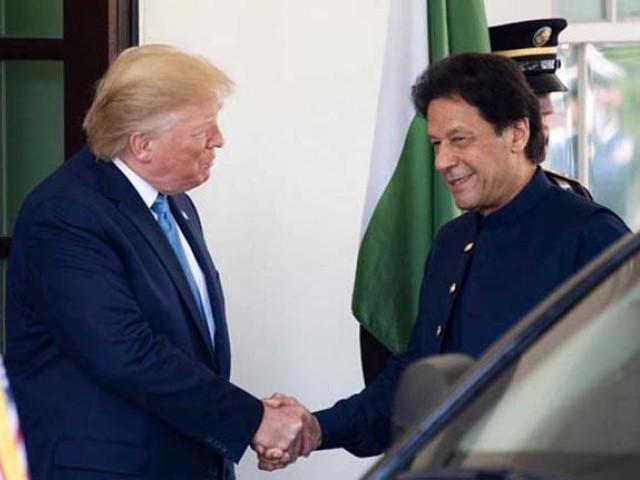 The prime minister had a telephonic conversation with Trump and discussed bilateral and regional issues, said the press release. Both the leaders agreed to remain in close contact and continue to work together for the promotion of the shared objective of Afghan peace, it added.

The phone call came two days after the Afghan Taliban released American Kevin King and Australian Timothy Weeks in exchange for the release of three Taliban commanders from Afghan prison under a deal that raised hopes for the revival of peace process.

“The US president thanked the prime minister for Pakistan’s efforts in facilitating this positive outcome,” the press release said. “He [Imran] conveyed that the release of Western hostages in Afghanistan was a positive development and Pakistan was happy that they were safe and free,” it added.

During the conversation with Trump, Prime Minister Imran reaffirmed Pakistan’s commitment to the advancement of Afghan peace and reconciliation process for a peaceful and stable Afghanistan,” the Prime Minister’s Media Office said.

Prime Minister Imran also apprised the US president of the ongoing situation in Indian Occupied Jammu and Kashmir (IOJK) and underscored that over eight million Kashmiri people remained under siege for over 100 days in occupied Kashmir.

“Appreciating the president’s continued engagement as well as mediation offer, he [Imran] stressed that Trump must continue his efforts for facilitation of a peaceful solution of the Jammu and Kashmir dispute,” the press release said.

Recalling their conversations in Washington during the prime minister’s visit to Whites House and again in New York on the sidelines of the United Nations General Assembly, the two leaders agreed to deepen their bilateral collaboration, including on the relevant multilateral fora.

The Afghan Taliban freed American Kevin King and Australian Timothy Weeks on Tuesday after holding them for more than three years under a deal that saw three Taliban commanders, including a brother of Siraj Haqqani, the head of the eponymous militant group, walk out of Afghan custody.

King and Weeks were kidnapped in August 2016 from outside the American University of Afghanistan in Kabul where both worked as professors. On November 12, President Ashraf Ghani announced that Afghanistan would free Anas Haqqani and two other Taliban commanders in exchange for the release of the two Western hostages.

Prime Minister Imran Khan had welcomed the release of the hostages and expressed the hope that this step would give a boost to confidence of all parties involved to re-engage in the peace process. “Pakistan welcomes release of professors Kevin King and Timothy Weeks in Afghanistan,” he said in a tweet.

“As part of the international community working to bring peace and end the suffering of the Afghan people, Pakistan has fully supported and facilitated this release as part of its policy of supporting initiatives for a negotiated political settlement of the Afghan conflict,” he said. “Pakistan remains committed to facilitating this peace process.”

In a first, Israeli PM indicted on ‘a range of corruption charges’