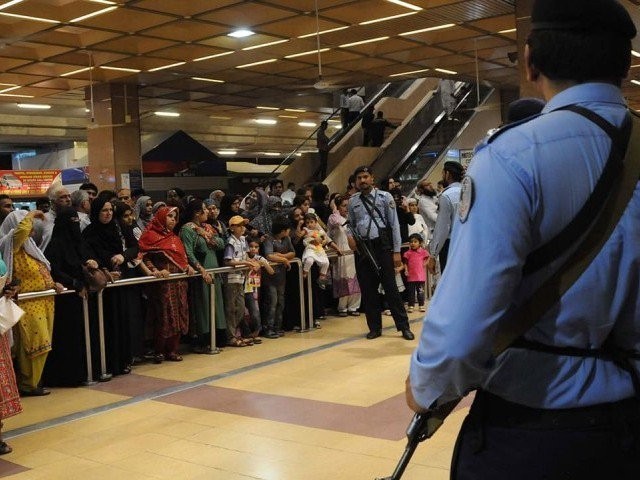 ISLAMABAD: The National Assembly’s subcommittee on Overseas Pakistanis and Human Resource Development on Wednesday took note of the increasing incidents of drugs smuggling and expressed dissatisfaction over the performance of the relevant institutions.

The subcommittee, which met here with Mahreen Razaq Bhutto in the chair, said that the agencies post at the airports to prevent drugs smuggling from the country had failed. The committee sought report on this issue in its next meeting.

The panel received briefing on the involvement of Pakistani citizens in drugs smuggling.

Officials from the narcotics control ministry informed the panel that the criminals were using innovative techniques to beat the scanning machines at airports.

The panel was also informed that the Federal Investigation Agency (FIA) had the total strength of 3,000 personnel all over the country which is insufficient for a thorough checking to prevent smuggling.

Aviation officials told the subcommittee that the inter-agency collaboration for exchange of information had improved, adding that there was no smuggling attempt during the ‘Road To Makkah’ operation.

The convener of the committee inquired how a blacklisted American woman was able to land in Pakistan. She pointed to lack of coordination among agencies and the ministries. “Tell us how secure we are? How these people enter the country?” she asked.

Officials of the Overseas Pakistanis Foundation (OPF) raised the question how come those caught at foreing airport give a slip to the officials in Pakistan. A narcotics control official said that there was special checking of Pakistanis at foreign airports.

The subcommittee was also informed that since Pakistan allowed death penalty, therefore, Britain and several countries of the European Union were not cooperation with Islamabad on sharing information.

The panel was informed that there was a need for taking note of the misuse of the agreements for the transfer of convicted prisoners, as some transferred prisoners exploit it to escape jail sentences awarded to them by the host country.

A foreign ministry official informed the subcommittee that Pakistan had signed accords for the transfer of convicted prisoners with nine countries, including China, Turkey, the United Kingdom, Thailand, Sri Lanka, the United Arab Emirates, Azerbaijan and others.

The official told the panel that Chinese authorities had pointed out the possible manipulation of the local laws by the shifted prisoner in their home country to lessen their jail terms.

He added that the UK had also expressed reservation in the past and signed the agreement on the condition that all the transferred prisoners would serve their complete jail sentence before being released.

Citing an example, he said Pakistan had signed the prisoner transfer agreement with Thailand last year and paid $35,000 for the transfer of 48 Pakistani prisoners who qualified the eligibility criteria.

There were some 88 Pakistani prisoners languishing in Thai’s jails, he added.

Under the agreement, he explained, the prisoners had to be transferred in three batches of 17, 17 and 19 individuals. He said recently 17 criminals were repatriated from Thailand but many of them filed remission plea in the court to got release order.

Stressing the need for improving the existing laws to avert manipulation of the agreement, the foreign ministry official urged the subcommittee to ask the ministries of interior and law to amend the laws so that the shifted inmates could serve the full penalty given in the host country.

The foreign ministry official denied the applicability in current scenario while responding to the demand of ministry of narcotics for expansion of the countries’ list with whom Pakistan had signed the ‘transfer to offender’ agreement.

Ministry of narcotics secretary has said that Pakistan should at least negotiate with the Middle Eastern countries for the transfer of prisoners involved in drugs trade. He added the initiative would help the Anti-Narcotics Force (ANF) to dismantle the drug peddlers’ network here in Pakistan.

The secretary sought details of the negotiations held with multiple countries, regarding transfer of criminals involved in drugs related crimes. The foreign ministry official said that Pakistan was in contact with Saudi Arabia for finalisation of such agreement.

The committee was also informed about the different issues faced by the relevant departments with regard to human resources.

The committee chairman underscored the importance of strong coordination among the relevant stakeholders to curb drugs and human smuggling.

The committee meeting was attended by National Assembly member Syed Javed Hassnain and officials of the ministry of interior, ministry of foreign affairs, ministry of aviation and the Overseas Pakistanis Foundation.