Spania­rd, who will finish the year as world number one, came throug­h a second-set tie-break to defeat Khacha­nov
By AFP
Published: November 20, 2019
Tweet Email 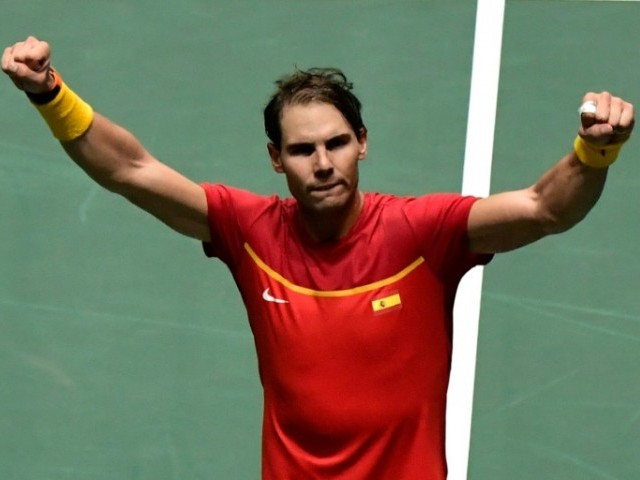 Spaniard, who will finish the year as world number one, came through a second-set tie-break to defeat Khachanov. PHOTO: AFP

MADRID: Rafael Nadal kept Spain alive in their opening Davis Cup tie against Russia on Tuesday by capitalising on a raucous home crowd to beat Karen Khachanov in straight sets.

Nadal, who will finish the year as world number one, came through a second-set tie-break to defeat Khachanov 6-3, 7-6 (9/7) and level the Group B match in Madrid ahead of a decisive doubles rubber.

Spain fell behind after Roberto Bautista Agut was earlier beaten 3-6, 6-3, 7-6 (7/0) by Andrey Rublev. Russia, who prevailed over Croatia on Monday, will qualify for the quarter-finals with another victory.

A new format this year means the Davis Cup takes place in one venue, across a single week, with organisers — among them Barcelona footballer Gerard Pique — hoping a tighter schedule will revitalise the prestigious trophy.

Nadal out of ATP Finals, but ends year on top

The three stadiums at the Caja Magica were all far from full for Tuesday’s early matches but Nadal enjoyed a bumper crowd of local fans for his opening contest in the evening.

“The atmosphere was amazing,” said Nadal. Asked about the success of the competition so far, he added: “It is difficult to answer today. Let me wait until the tournament is over to have a clear and better opinion.

“The only negative in my opinion is we are just starting the last match and it’s 12.45am. That means big trouble for us the players and also for the people who have come to the stadium too, because tomorrow is a workday. It makes everything difficult.”

Australia’s Nick Kyrgios said he was ready to lead Australia to glory in the tournament after they overcame Colombia.

Australia could seal their place in the last eight by beating Belgium on Wednesday and Kyrgios, who has returned from a two-month break to play in Madrid, was feeling bullish after his win.

“I haven’t played that much in the past couple of months but I took time off to get ready for this event,” Kyrgios said afterwards.

“I think we can win it for sure. The way that Alex is playing and I know I can beat every single person in this competition.”

ATP Finals: Djokovic has world no 1 Nadal in his sights

Even without their injured star Kei Nishikori, Japan came close to recording a major upset before experienced French duo Nicolas Mahut and Pierre-Hugues Herbert pulled the 10-time champions over the line.

Their 6-7 (4/7), 6-4, 7-5 victory against Ben McLachlan and Yasutaka Uchiyama clinched victory for France after Gael Monfils slipped to a surprise 7-5, 6-2 singles loss to world number 73 Yoshihito Nishioka.

Jo-Wilfried Tsonga had opened with a 6-2, 6-1 win over Uchiyama.

France, on their 100th appearance in the Davis Cup, are one of the favourites this week even if they have been highly sceptical of the controversial changes to the 119-year-old competition.

“I have to say, it is a strange feeling,” said Mahut. “When you play Davis Cup, usually the stadium is full.”

“Actually, it was pretty special because it was the first time I hear myself singing the Marseillaise,” added Herbert.

Elsewhere, Argentina beat Chile 3-0 and Kazakhstan prevailed 2-1 against the Netherlands.

Kazakhstan, who will face Andy Murray and Great Britain in Group E on Wednesday, needed Mikhail Kukushkin and Alexander Bublik to win the doubles rubber 6-4, 7-6 (7/2) against Dutch pair Robin Haase and Jean-Julien Rojer.