‘We should be worried about the state of polio’

‘We should be worried about the state of polio’ 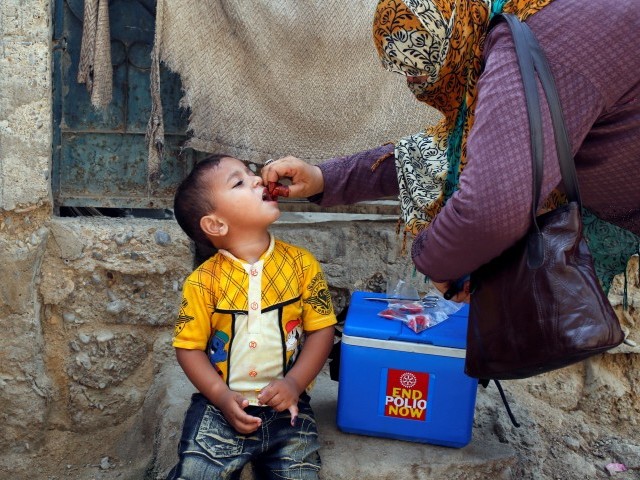 ABBOTTABAD: The top bureaucrat of the province on Tuesday expressed concerns over the failure of immunization teams to hit their targets during an on-going polio vaccination campaign and poor coordination amongst the teams.

“We should be worried about the present state of polio and exert ourselves with missionary zeal and tireless endeavours for controlling the deadly disease as it was bringing a bad name to the province and the country,” said Khyber-Pakhtunkhwa (K-P) Chief Secretary Dr Kazam Niaz while chairing an evening review meeting at the Deputy Commissioner’s office for the ongoing four-day polio campaign in Abbottabad.

He expressed his displeasure over the failure to achieve targets in the campaign apart from the absence of coordination amongst departments and effective communication strategy to reach and educate parents in the district.

He warned that those responsible will be taken to task if any poor performance on their part surfaces in the execution of the polio campaigns.

To address parental refusal, he suggested motivating and persuading parents who are reluctant to administer polio drops to their children.

He reviewed in detail the outcome of the first day of the polio campaign. Noting the missed targets, he asked the authorities to fully review and examine the issues that they faced during the campaign and take concrete steps for resolving them.

The chief secretary further directed that a comprehensive and integrated strategy must be devised and implemented in letter and spirit for the effective dissemination of polio messages to the public in general and parents in particular.

New polio cases are giving a bad name to the province and the current campaign has to set the pace for eliminating the disease, he said, adding that this can only be achieved through hard work, dedication and accomplishing targets.

Taking notice of the fake marking on fingers of children by their parents to deceive polio teams, he directed all officials to thoroughly check for such practices.

The chief secretary further directed the district administration and the local health department to launch an anti-dengue campaign next month ahead of the upcoming dengue season. During this campaign, he further directed to collect data about minor out-of-school children which can be used for enrolling these children in schools.

Earlier, Dr Niaz also paid a surprise visit to the Benazir Bhutto Shaheed Teaching Hospital in Abbottabad. He reviewed the emergency section of the hospital along with wards and other facilities. He expressed his dissatisfaction and deep concern over the poor condition of facilities there as well.

However, he expressed the view that the hospital requires total reconstruction and directed the administration to take immediate measures for carrying out the necessary repairs and setting up waiting rooms as well as providing drinking water and meals at the newly established shelter home.