Imran says lettin­g corrup­t politi­cians off the hook would be ‘bigges­t betray­al to nation’
By ​ Our Correspondent
Published: November 19, 2019
Tweet Email 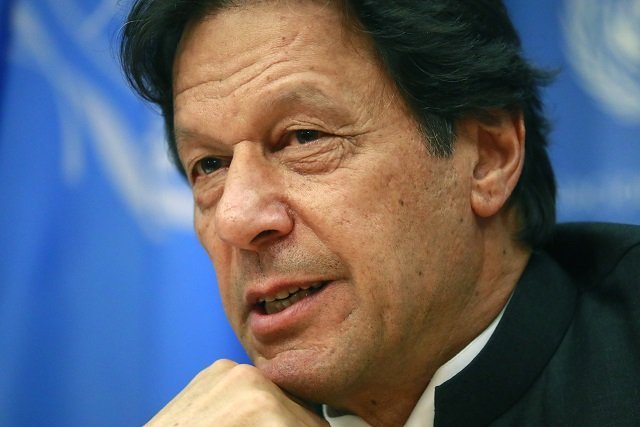 ISLAMABAD: Apparently unperturbed by myriad economic and political challenges his government is entangled in, the embattled prime minister on Monday refused to relent in his campaign to go after anyone and everyone who has looted the nation’s wealth.

At the same time, Imran Khan requested the country’s top judge and his successor to revive the public’s trust in the country’s judicial system.

The premier was in Havelian to inaugurate 39.3km Havelian-Mansehra section of the 118-km-long HavelianThakot motorway. He, however, used his speech at the ceremony to speak his mind out on two issues — the so-called Azadi March and Nawaz Sharif’s illness — which remained the talking points on the media since last month.

“If there could be an expert in dharna in Pakistan, he’s standing right in front of you,” Imran told the audience, which burst into a peal of laughter and applause.

“At the start [of JUI-F’s dharna], I said if they could stretch their sit-in for a month, I would concede to all of their demands,” he added.

The prime minister revealed that some “faint-hearted” aides in his cabinet were “frightened” when thousands of opposition workers had converged on the capital, but he reassured them not to worry because there was no objective of the “circus on the container” staged by JUI-F chief Maulana Fazlur Rehman.

Referring to the 126-day-long marathon sit-in he had staged in 2014, Imran said a dharna could only be sustained if it was driven by an objective.

He accused the Maulana of duping “innocent madrassah students” into joining the ‘Azadi March’ and using the “religion card” for “petting political gains”.

The Maulana was joined by all opposition parties — including the PPP, PMLN, ANP, and PkMAP — as Bilawal Bhutto Zardari, Shehbaz Sharif, Asfandyar Wali, Mehmood Khan Achakzai, and Aftab Ahmed Sherpao shared the stage with the cleric on different occasions during the 13-daylong dharna.

The prime minister called the dharna marriage of interests where self-styled liberals stood shoulder to shoulder with conservatives and Islamists.

“I used to look at the faces [atop] the container. Every corrupt politician scared of accountability was there. And the bigger the thief, the louder he shouted,” he said while referring to the opposition leaders who made anti-government speeches from atop the Maulana’s container.

The Maulana’s dharna was unique because it attracted a liberal political party like the PPP, a centre-right conservative party like the PML-N, and nationalist parties like the ANP and the PkMAP.

“They have no ideology. They are a Mafia. They are part of the old system. I had said on the first day after coming to power that when going after the corrupt, they all would gang up,” the prime minister said.

“Bilawal is not a liberal. He is liberally corrupt,” Imran said while ridiculing the scion of the Bhutto dynasty for a ridiculous justification he had given for this year’s rain-induced urban flooding in Sindh which, the premier sarcastically said, had “surprised the scientific community of the world”.

On the other hand, he said the PML-N had no political ideology. “They are driven by money. They will become liberal for money one day and switch to jihadism the next day,” he added. The prime minister said the interests of these corrupt politicians were in conflict with Pakistan’s interests. “Millions of people in Indian Occupied Kashmir have been under siege for more than 100 days, while our media was fixated on the circus, giving a minute-by-minute account of the Maulana,” he regretted.

He revealed that the opposition had demanded an “in-house change” in return for calling off their dharna. “They [opposition leaders] only have issues with Imran Khan. Why? Because they know Imran Khan doesn’t carry a price-tag,” he said to thunderous applause from the audience.

However, he reiterated his resolve to pursue ruthless accountability, come what may. “If I give in to their blackmail and drop the corruption cases against them, it would be the biggest betrayal to the nation,” he said.

Former military ruler Gen Pervez Musharraf had promulgated the notorious National Reconciliation Ordinance (NRO) to drop hundreds of cases against opposition politicians. “NRO means amnesty for the looters of the nation’s money,” Imran said. “He [Musharraf] had dropped corruption cases against both [parties] in order to prolong his rule. I could do the same. I could strike a clandestine deal with them and then rule in peace.”

However, he said he would not spare anyone. “I’ve been trained by God in the fighting. I’ve been trained on the cricket ground for 20 years. I know how to fight; how to win; how to go down; and how to rise after defeat. I challenge all of you! Do whatever you can do, I’ll recover the nation’s money from you, no matter the cost,” he said.

The prime minister accused the PML-N and the PPP for increasing Pakistan’s debts four-folds which, according to him, was to blame for the current difficult economic situation, rising inflation in particular.

He said his government was repaying the massive debts it has inherited from its predecessors. The prime minister also responded to criticism from ‘Shobaz [read: Shehbaz] Sharif’ who he said was better suited for a Bollywood role because of his acting skills.

The PML-N president had accused the government of dilly-dallying on letting the ailing former prime minister Nawaz Sharif to fly abroad for treatment of his undiagnosed medical condition. Shehbaz went on to warn that if anything happened to his brother, he would hold Imran Khan accountable.

Premier Imran said it was unprecedented that the federal cabinet had considered on humanitarian grounds the application of someone who has been convicted of financial corruption by a court of law. He disclosed that most cabinet members had opposed the idea of allowing Nawaz to travel abroad for treatment, but he decided to let him go in return for an indemnity bond. “We only asked them for Rs7 billion indemnity bond – and let me tell you Rs7 billion is nothing for the Sharif family. They would tip this much money,” he said, adding that instead of submitting the bond, the PML-N created a scene on the media.

Shehbaz had said he could guarantee his brother’s return. The prime minister wondered how Shahbaz could be a guarantor for others while he himself was facing corruption cases.

“All members of the Sharif family, including Shehbaz’s son and son-in-law, two sons of Nawaz Sharif, and Ishaq Dar and his sons had absconded to avoid the corruption cases,” he added.

The prime minister said the government has accepted the court’s decision allowing Nawaz to go abroad for treatment but questioned as who would be responsible for over 800 prisoners who had died in jails during the last 10 years. Did anyone ever ask as how their families were living, he questioned.

He told the gathering that Pakistan would emerge as a great nation if the society followed justice and humanity as two core principles on the pattern of the State of Madina.

He said the Muslims had faced downfall in the past when they had deviated from the principles of justice and compassion to the poor, elders and orphans in the society.

He viewed that an effective justice system made the people feel independent and the discriminatory laws marred the nations in the past. He requested the incumbent Chief Justice of Pakistan Asif Saeed Khosa and his successor to make all-out efforts to revive the public trust in the judicial system for what he said the government would extend all-out resources and support.

The four-lane controlled access Havelian-Thakot motorway is part of the ChinaPakistan Economic Corridor and will serve as the main route for the commercial traffic between two countries, besides reducing the travel time by up to 2.5 hours between Islamabad and Mansehra.

The premier said the CPEC’s scope had been widened from just a few roads and power projects to agriculture and skill training to enhance the agriculture yield and create job opportunities. Moreover, besides the development of Gwadar port, China would also relocate its industries to Pakistan, he added.

Imran said the government had decided to allow duty-free import of medical equipment to encourage the construction of new hospitals.  The government is also working on the foreclosure laws to arrange housing loans for the poor that would boost the housing sector, besides supporting the allied 40 industries.