Struggling for survival: Indian pangolin, a species on the brink of extinction

Struggling for survival: Indian pangolin, a species on the brink of extinction

Almost 70-80% of local pangol­in popula­tion has been wiped out by hunter­s and poache­rs
By Asif Mehmood
Published: November 19, 2019
Tweet Email 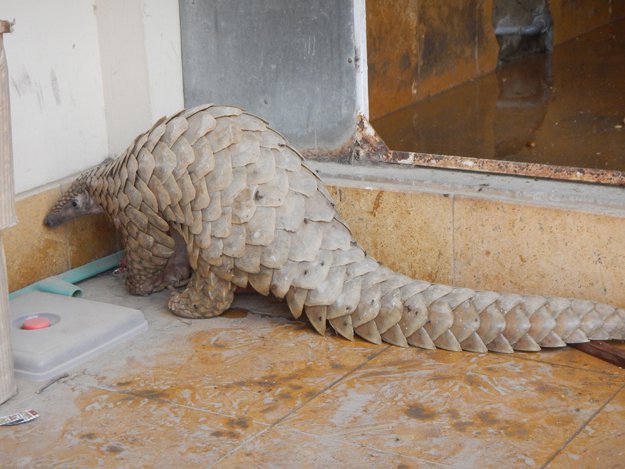 LAHORE: Manis crassicaudata, better known as the Indian Pangolin, is one of the eight extant species of pangolin native to the Indian subcontinent. But after years of being hunted for consumptive uses and international trade, the ant-eating mammal struggles for existence in Pakistan and is categorized as an endangered species on the International Union for Conservation of Nature (IUCN)’s Red List.

In a bid to conserve Pakistan’s pangolin population, a local community-based Organization (CBO), recently conducted a survey in the Chakwal district of Punjab. The CBO also produced a documentary highlighting the need to conserve this species living on the brink of extinction.

According to the honorary game warden of the Punjab wildlife department, Bader Munir, who also heads the CBO, the findings of the survey reveal that almost 70-80% of local pangolin population has been wiped out by hunters and poachers.

“If strict conservation measures are not implemented immediately, Pakistan may witness the loss of an entire species,” Munir told.

Although the Indian Pangolin population is spread across the country, the mammal’s major habitat is in Chakwal, Potohar, Punjab, Azad Kashmir, Khyber Pakhtunkhwa, Sindh, Balochistan, and Gilgit-Baltistan.

The main reason for the Indian Pangolin’s endangerment is the value of its dorsal scales, meat and leather which fuels certain pharmaceutical and cosmetic industry around the world.

“Pangolin is widely used in China, Vietnam and several other countries including Pakistan, where people are willing to pay big money for its scales and meat,” said Munir, whose documentary is part of conservation campaign for the Indian Pangolins.

A World Wide Fund for Nature (WWF) research reveals that the Potohar region remained a hotspot for pangolin hunting in country during 2011-2012.

In Chakwal alone, around 60 cases of pangolin hunting were recorded in two years, whereas approximately 10,000 pangolins were smuggled from Pakistan between 2011 and 2014.

Munir, who intends to send his documentary to global organizations including the United Nations, says pangolins are an environmentally friendly species which help conserve the forests.

“The Indian Pangolin eats insects and termites which in excess can be harmful to the trees, but people don’t know about that and my documentary is the first to show the life of Indian pangolins with such detail,” the filmmaker told The Express Tribune.