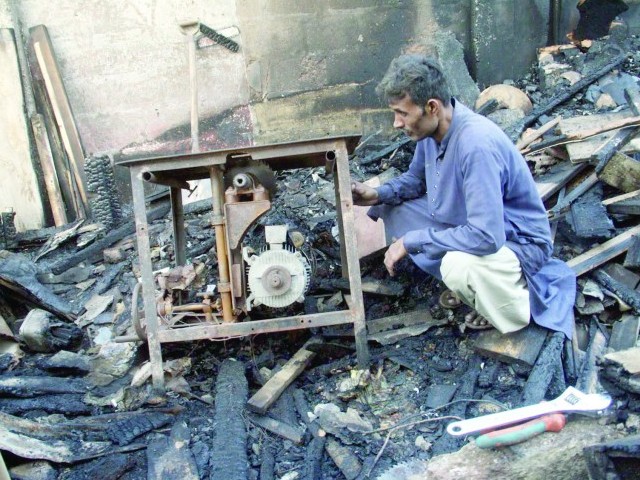 A vendor at the timber market in Old Haji Camp looks for something to salvage from the remains of the merchandise which was largely engulfed in flames on Sunday as the fire ravaged eight shops and two warehouses. PHOTO: online

KARACHI: Karachi, a bustling city of over 20 million people, is catered to by only 13 fire tenders. The metropolis, one of the largest industrial hubs of the country, is home to several factories and warehouses which are often prone to accidents. However, only 13 of the Karachi Fire Brigade’s 50 fire tenders are currently in use while the rest remain out of order. This means that each fire station currently operating only has one fire tender it can rely on. If it fails, the entire station in effect is rendered useless.

Moreover, in case of multiple fires, the fire department’s ability to respond to them all in a timely manner is severely compromised. Such a situation arose on Sunday morning when shops at a timber market in Old Haji Camp caught fire at around 7am and a little over an hour later, another fire erupted at an old timber warehouse in Landhi 89. Earlier, between Friday and Saturday, the city witnessed at least four separate cases of fire which resulted in the death of a minor girl. The fires also engulfed merchandise worth thousands of rupees and caused the deaths of several livestock.

Too hot to handle

The fire at Old Haji Camp was declared a third-degree fire and assistance was sought from all fire stations of the city. Eight timber shops and two warehouses burned to the ground in the fire in which livestock, including goats, sheep and hens, also burned to death before it was finally contained.

Speaking to The Express Tribune, the shopkeepers said that the fire-fighting squad arrived an hour late. They claimed that timber worth Rs25 million burned to ashes before the fire was contained. Fortunately, however, a family that was residing on the upper storey of one of the burnt warehouses was safely evicted when the flames first ignited. The shopkeepers were of the belief that the incident occurred due to a short circuit.

Multiple fire tenders participated in the operation and emergency was declared by Karachi Water and Sewerage Board (KWSB) authorities at a nearby hydrant to assist the fire department.

Speaking to The Express Tribune, Fire Officer Zafar Ahmed said that the complaint was received at 7:15am and one fire tender reached the site soon after. He claimed that 11 fire tenders, one snorkel and four bowsers were used during the operation which lasted for around an hour. According to Ahmed, the cause of the fire has not been ascertained yet and the investigation would begin once the site had cooled down.

If the fire erupted at 7am, the department received the complaint at 7:15am and the fire tenders arrived in around an hour – as the shopkeepers claimed – 11 of the city’s 13 fire tenders were occupied when the fire department received another complaint around 8.25am. Fortunately, there was no loss of life in the incident in Landhi89. However, merchandise worth thousands of rupees was engulfed in flames in the hour it took to contain the fire.

Similarly, on Friday night the fire department responded to three separate fire incidents with its limited resources. A warehouse of old goods situated between the hills in Musharraf Colony caught fire. Three fire tenders were sent to the site when the complaint was received but as the flames spread rapidly, four more fire tenders were sought soon after. Strong winds exacerbated the flames and the situation worsened as it took the fire department longer to reach the site due to the lack of a proper roads leading to the area. Fire officials said that the tankers supplying them water also arrived late as the site was located in the midst of bushes several kilometres away from Hub River Road.

There was another fire incident during the same night in a shop on the ground floor of a three-storey building near Tanki Ground, Malir. It took two fire tenders to extinguish the flames which had begun licking other parts of the building as well.

Yet another fire broke out at a cloth factory in Pak Colony which engulfed the entire factory in flames. Around seven fire tenders were needed to contain the flames.

According to fire officers, it was the silk cloth stored on the top floor of the building which had caught fire and the flames spread from there.

Meanwhile, on Saturday a minor girl sustained burn injuries when flames, ignited by a short circuit in the UPS, engulfed her room in a house in Khokhrapar, Malir. Speaking to The Express Tribune, SHO Farooq Sanjrani said that three-year-old Mansha sustained severe burn injuries as the flames spread rapidly across the room. Her mother panicked at the site of her injured daughter and called out to the neighbours for help. The family and neighbours extinguished the fire through ad hoc efforts and shifted Mansha to a hospital where she succumbed to her injuries. The SHO said that Mansha’s father works abroad and Mansha was the youngest among three siblings.

Although the efficiency and painstaking efforts of the fire department are commendable in all these incidents as they did manage to contain each of the fires they were called for and prevented the loss of human life, it goes without saying that the department’s resources were stretched to the maximum this weekend. And this wasn’t a rare occurrence for the department responsible for putting out fires in the metropolis.

Lack of planning and negligence on the part of the Sindh Building Control Authority (SBCA) and other government wings has resulted in a concrete jungle of high-rises, none of which have adequate fire safety and evacuation facilities, they said. The absence of a fire safety code means many buildings operate without fire escapes and basic fire-extinguishing apparatus. As a result, an effective fire brigade is the only other option for the city to ward off a massive fire disaster.

“Nearly 4,500 fire incidents occur in Karachi each year,” said Fire Station Officer Mazhar Rafiq. “Most of them occur due to faulty wiring. Most such incidents, especially the serious ones, also take place in industrial zones and commercial areas,” he added.

Added to this is the lack of safety protocol for citizens at large and the delayed response time of the department due to limited resources.

If the city of 20 million people was to comply with international standards, it would have had 200 fully functioning fire brigade stations staffed with more than 10,000 personnel, according to fire safety experts. That is one fire station for every 100,000 citizens, equipped with four fire tenders and staffed with over 50 operational personnel working round the clock in shifts. Each shift would have at least 16 firefighters, eight drivers, four leading firemen, two sub fire officers and, of course, one station officer, on call and ready to go.