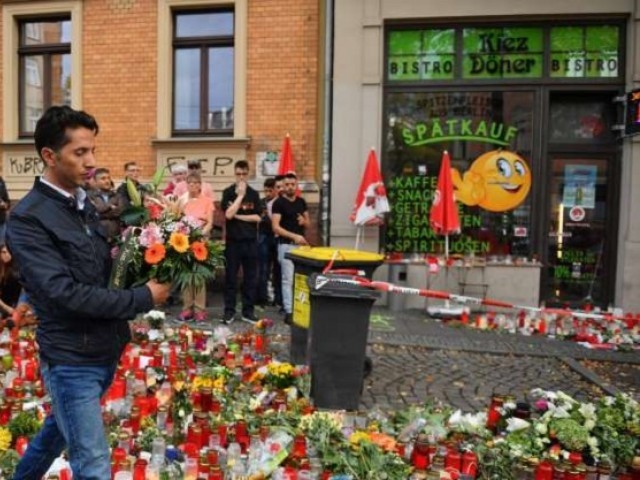 Ismet, an employee in the 'Kiez Doener', lays down a bunch of flowers at a makeshift memorial of candles and flowers for the victims of a deadly shooting during an attack targeting the Turkish restaurant after an attempt at a synagogue, on October 13, 2019 in Halle, Eastern Germany. PHOTO: AFP

FRANKFURT AM MAIN: The owner of a kebab shop targeted in a deadly far-right attack in the German city of Halle last month has gifted the eatery to the two brothers who were working there during the shooting.

Siblings Ismet and Rifat Tekin received a framed letter transferring the ownership of the Kiez-Doener to them in a ceremony on Saturday as the restaurant reopened for the first time since the October 9 attack.

“I wish my successors much strength in processing the terrible events of October 9, 2019 and hope they have many customers of different cultures and religions,” their former boss Izzet Cagac wrote in the letter, which was accompanied by a key.

A 20-year-old customer was shot dead when a gunman opened fire on the kebab shop after earlier trying and failing to storm a synagogue. He also killed a female passer-by.

The assailant, a suspected neo-Nazi, was arrested and later admitted that the attack was motivated by anti-Semitism and right-wing extremism, fuelling concerns about an increasingly violent far-right scene in Germany.

At the reopened kebab shop, a colourful memorial wall paid tribute to the victims and all customers could eat for free over the weekend, local media reported.

“In a society increasingly plagued by brutality and hatred, this gesture of solidarity and humanity offers a small ray of light,” it wrote.