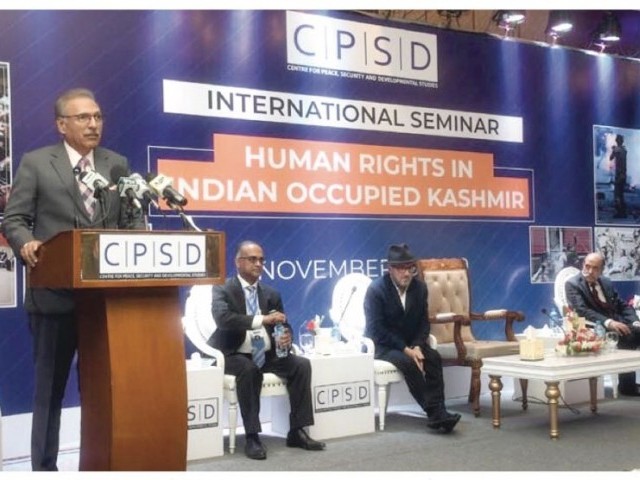 Speakers at the International seminar on human rights in IOK. PHOTO: APP

Speaking at an international seminar on ‘Human Rights in Indian Occupied Kashmir’ in Karachi, organised by the Centre for Peace, Security and Developmental Studies (CPSD), they expressed their grave concerns over the deteriorating human rights conditions in the occupied territory.

Alvi told the seminar that Indian actions since August 5 – introduction of additional military forces and the imposition of lockdown – had resulted in biggest humanitarian crisis in modern times. “The risk of escalation could lead to much greater humanitarian crisis than ever before,” he warned.

“Pakistan is committed to the Kashmir cause morally, ethically, and diplomatically,” he said. He lamented that the United Nations had become an institution of wasted opportunities, where humanity and human rights violation were ignored for the sake of interests of major powers.

“Considering the inability of the UN, we should convince the world through effective media projection of the Kashmiris’ plight and for that it is essential for international media to get access to the real picture of the occupied Kashmir.”

Noted British politician George Galloway said that Kashmir was under illegal occupation of Indian forces and its tyranny against the Muslims of Kashmir was due to its own fear of the Kashmiri freedom struggle and vigour for independence from Indian occupation.

He said that the people of Kashmir had the right to resist the occupation in not only a peaceful manner but also by using arms if they considered it necessary.

He added that Kashmir was not a bilateral issue but multilateral as it involved Kashmiri people along with Pakistan and India.

He insisted that the world had the duty to play its role for the resolution of Kashmir conflict as it involved two nuclear powers. He warned that eruption of any war between Pakistan and India could lead to catastrophic consequences for the world peace.

Speaking on the occasion, Minister of State for State and Frontier Regions and Narcotics Control Shehryar Khan Afridi stressed the need for a comprehensive and unified response at the national and international levels for the protection of human rights in occupied Kashmir.

He said that Pakistan had been unfairly presented by the international media for many years and “our sacrifices and unparalleled support for humanitarian causes” had been neglected. Pakistan opened its arms to those who became victims of Hindu extremism in 1947 and opened its borders to its Afghan brothers once their country was invaded.

Former foreign secretary Najumuddin Sheikh, was of the view that states were currently more focused on economic benefits and least bothered about their moral duties. He highlighted that there was dichotomy of words and actions of international community in relations to the Kashmir issue.

The CPSD chairman, speaking next, warned that the Kashmir crisis presented a grave danger not only to regional security but also global peace and prosperity.

He urged the international community to help de-escalate this crisis, force India to reduce forces and hold plebiscite in occupied Kashmir.

Syed Muhammad Ali, Executive Director, CPSD, said that Kashmir represented the test of the changing world order that how the status quo and anti-status quo powers were going to fulfil their moral responsibilities or continue to pursue short-term material interests.

“We must collectively build a world that is safer and more secure for our future generations, including Kashmiris and learn from the mistakes of our past generations,” Shah told the participants, which included members from diplomatic community, human rights activists, government officials, intellectuals, researchers, and students.

Ahsan Mukhtar Zubairi Secretary General Foreign Relations Section of the CPSD, in his welcome address said that Kashmir was an important issue that affected the peace, prosperity and progress of over 1.5 billion people of this critical region.