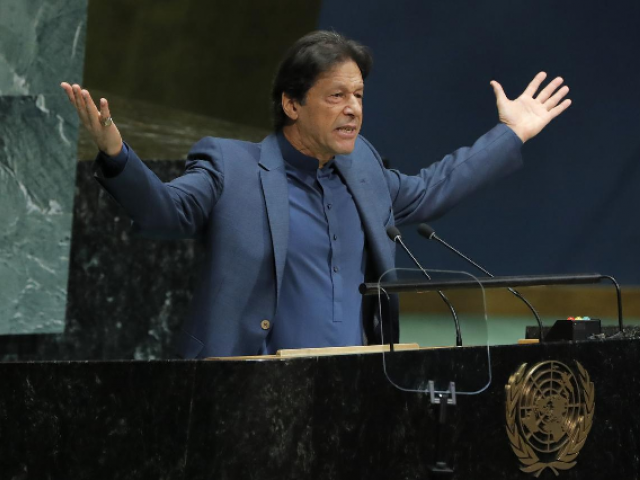 Madina ki Riyasat (the State of Madina) is our Prime Minister’s benchmark — that is where he wants to take Pakistan. Build and transform this country on the same principles on which the State of Madina was built. Ideally, we all would want that but those times were different and so were the people who lived under the leadership of Prophet Muhammad (peace be upon him) and the caliphs that followed him and ruled Madina.

Today, managing and governing a country is very difficult. One can lay down higher ideals and even show the political will and maturity to attain them but the many centrifugal forces and external factors become the stumbling blocks that hinder the achievement of one’s aim — at least in the timeframe one would want to achieve it in.

In today’s harsh political environment and circumstances can one man really mange the country? Is that one leader the only one that people look up to? With the devolution of authority and the federated units under different governments the “leader at the centre” can’t even get his bigger idea accepted by some of these units in true letter and spirit that he wants and the greater irony is — he can do nothing or little about it. As far as managing the country is concerned “Stalin proved that one man can manage the country”. But then according to a rough estimate 20 million people died over his 25-year-long reign (1928-1953). On the contrary Brezhnev ruled the Soviet Union for 18 long years (1964-1982) and it is (jokingly) said about him that he proved that even a country as big as the USSR can run without being managed at all. And as Russia’s examples are being quoted, look at President Putin now. In 2000, President Putin won the first of his four presidential elections (2000, 2004, 2012 and 2018) and if Russia experienced a reversal of fortunes it is because of this continuity of a leader who is likely to occupy the office of the Russian President till 2024 (given there is no Constitutional amendment).

Putin also had a dream and much of what he did including his aggressive foreign policy was necessitated by how he wanted to protect his riyasat (state) and what he called “the defence of the motherland against the evil West”. His agenda was clear from the start — “revive the Soviet-era source of legitimacy” and for that he fought the Chechen War, politically combated the 2012 street protests against his presidential elections (accused the West for sponsoring and funding it), invaded Eastern Ukraine, annexed Crimea and showcased the real rise of Russia through his military interference in the Syrian War.

President Putin didn’t believe in the Mussolini-gifted fascist credo: “Believe! Obey! Fight!” yet he was also not obsessed and tied with Churchill’s belief in the principles of “Justice and fair play”, or “protecting the weak against the strong”. His fight was against the immediacy of the threats and the magnitude and potential of those threats. President Putin’s story is the story of success. The world took advantage of Russia when it was weak but that is no more the case now. The Russian people rose behind him, supported him and gave him an opportunity.

Ideas or any idea stands on economic realities. Just to quote one example, Russia’s foreign reserves when Putin took over his first assignment (2000) as a President were $8.5 billion but today they are heading towards a phenomenal figure of $600 billion. Domestically also President Putin could execute some tough reforms (raising retirement age, taxing incomes and ousting oligarchs) only because the country was economically on the rise despite the US imposed sanctions. Today Russia is in close alliance with China and together both President Xi and President Putin proved to the world that to change the lives of the people for the better, a great and visionary leader and his continuity in office matters. Although both the rising powers are not democracies, there are sufficient lessons one can find in how these countries are shaping the future destinies of their countries — good leadership matters, within or without democracy.

Yet in modern day politics bad leaders come and also stick around for a very long time. President Robert Mugabe did that in Zimbabwe, a country he ruled for 40 years. In January 2000, a lottery was organised by the state-owned bank in the country and the entire nation participated in that. When the ticket was drawn by the Master of Ceremony for a Z$100,000 prize, “His Excellency RG Mugabe” was written on it. His was an overt way of making a fortune; modern day politics is all about covertly doing it by creating “extracting institutions” that fill the democratically unaccountable pockets.

Today’s democracy is weakened by lies and as Madeleine Albright writes in her 2018 bestselling book, Fascism — A Warning, today those “leaders who play by the rules are having trouble staying ahead of a relentless new cycle and must devote too much effort trying to disprove stories that seem to come out of nowhere and have been invented solely to do them in”. Thus according to her those leaders who come to power on the promise of change often begin to lose popularity from the day they take office.

Time gives us a sense of before, during and after. The current rise in the price of tamatar (tomatoes), the absolute lack of investment in the most basic and essential public services and being in the grip of an economic crisis, all these problems are not the causes but the symptoms and scars we bear of State neglect. It is not the nation that fails a state it is the state that mostly fails the nation. It is in this context and with the desire to turn around the fortunes of the State that Prime Minister Imran Khan, who having been provided an opportunity by the people brings this grand idea of “Madina ki Riyasat” — a political approach of how the state should function and can function on such principles as justice and equality.