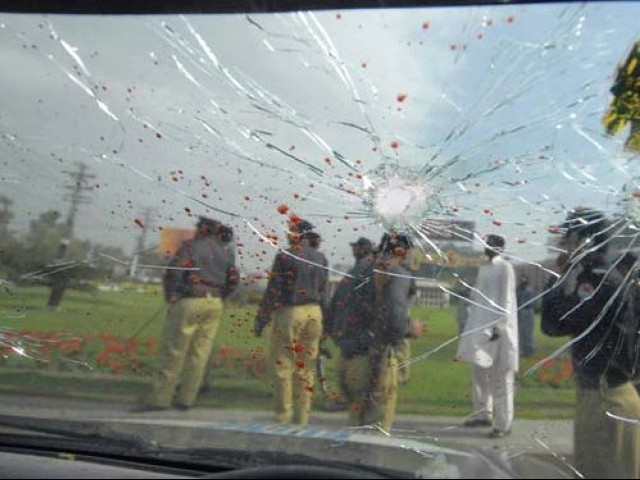 A circular sent by Special Branch of Punjab police, and obtained by The Express Tribune, has asked ‘agencies’ to closely monitor activities of Malik Muhammad Ishaq.

The circular titled “Malik Muhammad Ishaq – mastermind of attack on Sri Lankan team released” outlines the history of cases registered against Ishaq and says that since he has been involved in similar cases in the past, it is imperative to keep an eye on him.

After discussing his profile, the circular recommends that a ‘close scrutiny of the bailed suspect, who was released today (Thursday) from Kot Lakhpat Jail after being in captivity since 1997, is needed.’

‘Less likely to get into trouble’

Tariq Ilyas Kyani, an officer at the Lahore police CIA department, says he is not worried. “Terrorist activities did not stop even when [Ishaq] was in captivity,” he said.

Kyani added that Ishaq is now a ‘public figure,’ and therefore unlikely to get into trouble.

He added that circulars, such as the one released  in Ishaq’s case, are only distributed in high profile suspect cases and are sent to the Inter Services Intelligence and other intelligence agencies that then monitor the person’s activities.

A high ranking intelligence official speaking on the condition of anonymity said that Ishaq had helped intelligence agencies in the past.

Later, when he started to think of himself as ‘too powerful,’ the agencies broke off ties with him, the official said.

Ishaq also provided vital information regarding the network of Aqeel alias Dr Usman, the alleged mastermind of the GHQ attack who is currently in custody, the official added.

“He was therefore received by the ASWJ chief today, who gave the security bond money and the guarantee that Ishaq will now continue his struggle for Islam using peaceful means,” Mavia said.

The Punjab government has been given the same guarantee, he said, adding that Ishaq is now headed home in Rahim Yar Khan.