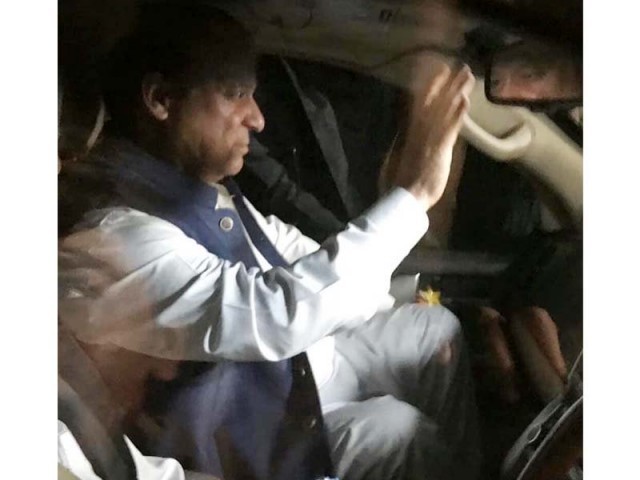 LAHORE: The Lahore High Court (LHC) allowed on Saturday former prime minister Nawaz Sharif to travel abroad for medical treatment, without having to sign the indemnity bond suggested by the federal government.

According to the order by a tw0-member bench after day-long proceedings, Shehbaz Sharif can accompany his brother abroad for four weeks.

The high court directed the federal government to remove the former premier from the Exit Control List (ECL) without any conditions.

During the hearing, Justice Najafi remarked that in his opinion, it was not fair for the government to place conditions after the Islamabad High Court had granted bail to the former PM.

After hearing the arguments, the LHC had presented its own draft for the undertaking, and handed it over to lawyers of both sides for review.

While the draft was accepted by PML-N, it was rejected by the government’s legal team.

Earlier, the PML-N president had submitted a written undertaking about the former prime minister’s travel and return to Pakistan.

It stated: “I undertake to facilitate return of my brother on certification by doctors that he has regained his health and is fit to return to Pakistan.” 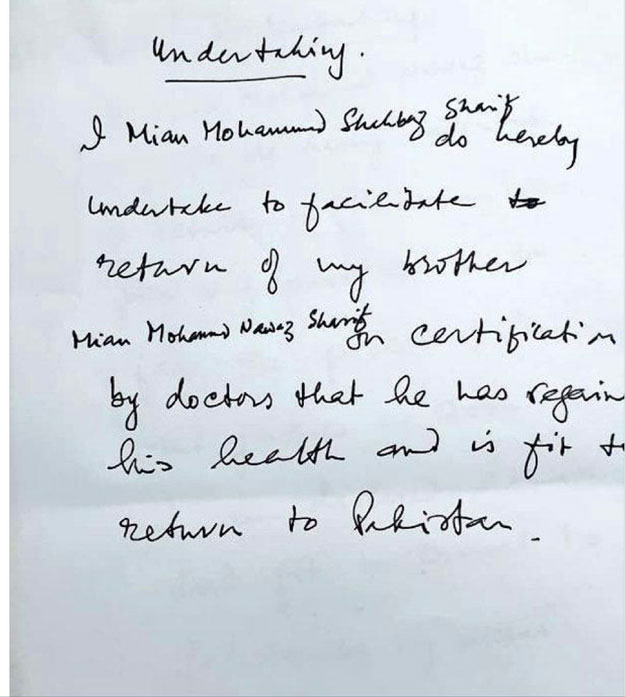 Shehbaz said the prayers of his mother, the nation and supporters had been granted. 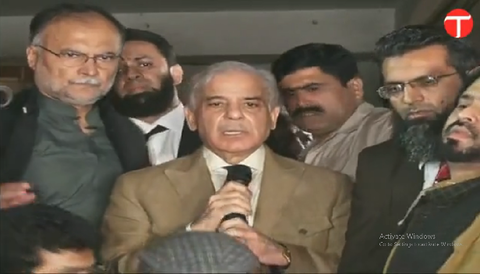 “I am thankful to Allah that court has allowed Nawaz Sharif to travel abroad for medical treatment,” he said, adding that the court had nullified the government’s “Unjust condition of indemnity bonds”.

Nawaz had refused to travel abroad for his medical treatment under the conditions proposed by the government.

He was shifted from Kot Lakhpat jail to the hospital last month after his personal physician Dr Adnan Khan raised an alarm over his deteriorating health.

The PML-N president had then submitted a request to the interior ministry as well as NAB for the removal of Nawaz’s name from the ECL so that the former prime minister could travel abroad for medical treatment.

He was granted bail by the LHC whereas his sentence was suspended by the Islamabad High Court for eight weeks on medical grounds.

Reacting on the court decision, Attorney General of Pakistan (AGP) Anwar Mansoor Khan said it was an “interim” order purely based on “humanitarian grounds”.

Addressing a press conference in Islamabad flanked by prime minister’s aide on information, Firdous Ashiq Awan, the AGP said the court did not reject the government’s stance of demanding indemnity from the Sharif family.

“I want to make this clear that the Lahore High Court did not reject the government’s stance of presenting surety bonds,” he said, adding that the matter will further be decided by the courts in January 2020.

The government, he said, would decide on appealing the decision after it receives a written order, which will also be taken up by the federal cabinet.

Khan said that the federal government never opposed Nawaz from traveling abroad for medical treatment but wanted assurance due to his track record of not fulfilling the commitments the family had made in the past.

Asked when Nawaz could fly out of the country, the AGP said the decision [to strike his name off the ECL] will be taken by the Ministry of Interior as soon as it receives the court order in writing.

Firdous said Nawaz’s wellbeing was a humanitarian issue, which should not be politicised.

Prime Minister Imran Khan, she added, had even issued directions to government spokespersons of not giving any political statements on the matter. 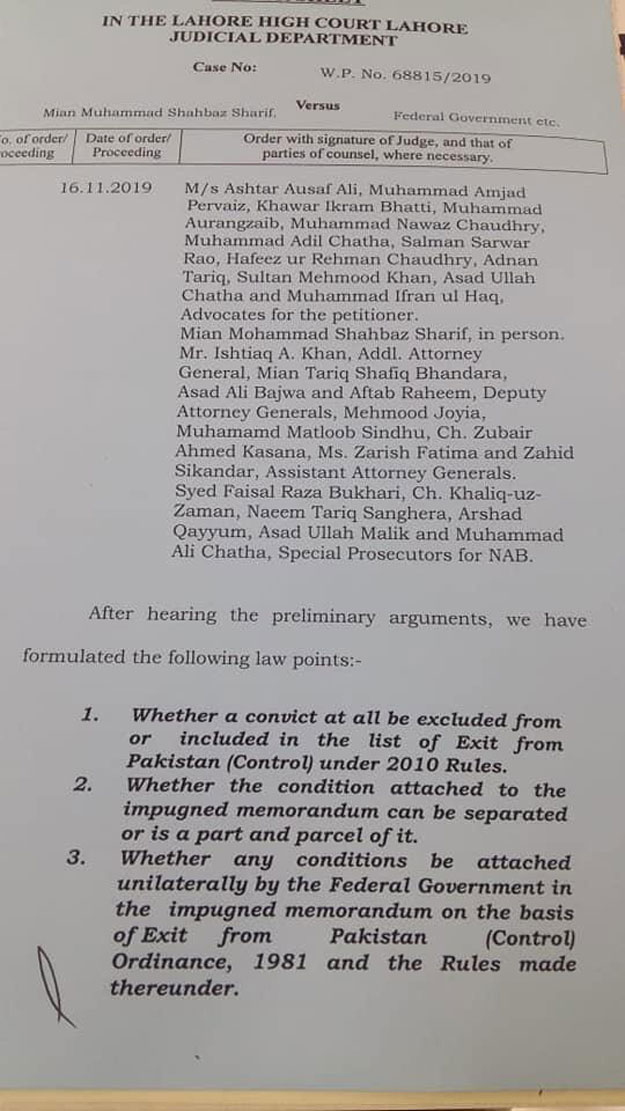 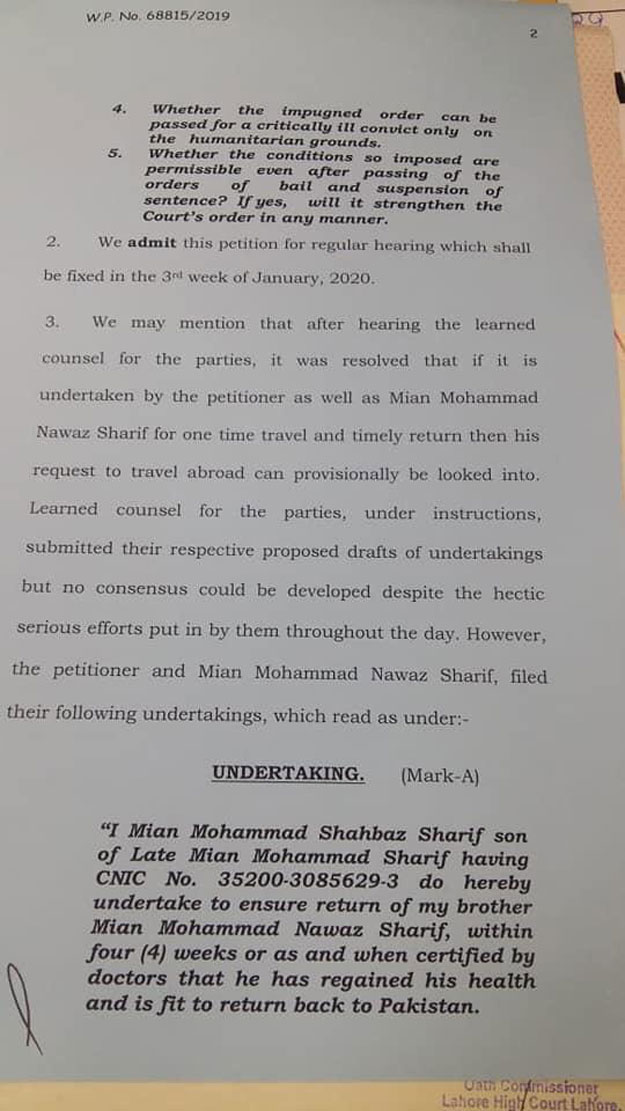 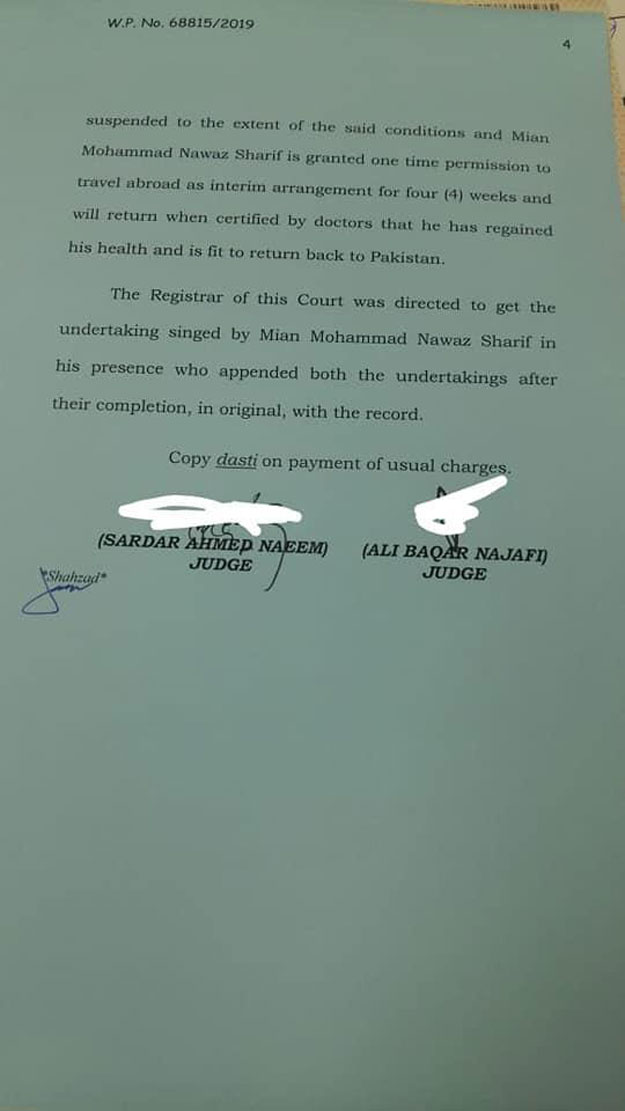