Tomato­es from Iran to arrive in four days
By ​ Our Correspondent
Published: November 15, 2019
Tweet Email 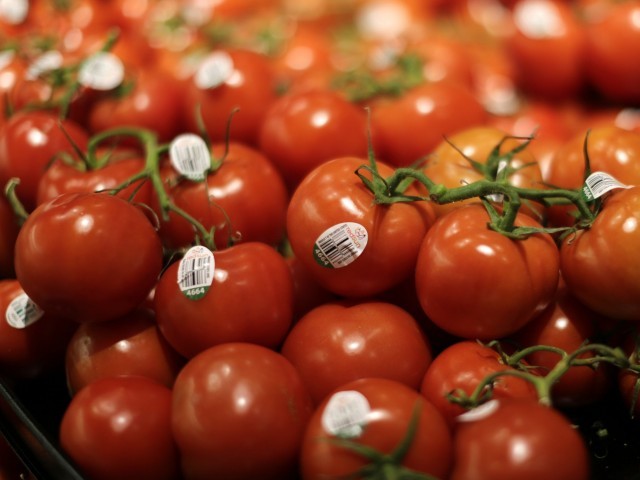 A Reuters file photo of tomatoes.

ISLAMABAD: The government has allowed tomato import from Iran for a limited time period in a bid to bring down skyrocketing prices, which recently crossed Rs300 per kg, in the domestic market.

“Consignments from Iran will start reaching Pakistan in the next four days. It’s a seasonal shortage as in this season tomato supply from Balochistan comes to an end while Sindh’s crop takes a few weeks,” said Federal Minister for Food Security and Research Sahibzada Muhammad Mehmood Sultan on Thursday.

“In this interval between Balochistan and Sindh crops, the shortage emerges for almost a month.” Iranian tomato will reach Quetta at a cost of Rs53 per kg.

Speaking at a press conference, the minister emphasised that Sindh was going to harvest a bumper tomato crop this year and it would start reaching markets in the next four weeks.

Estimates suggest that tomato production in Sindh would be higher by around 40,000 tonnes compared to last year, he said, adding that the government was also working on establishing public markets in cities in an attempt to end the role of middlemen, who were receiving abnormal profit margins while the common man was suffering.

Turning to the country’s staple food crop, the minister emphasised that there was no shortage of wheat as millions of tons of the commodity were available in the country. He pointed out that flour prices in Sindh were higher than other provinces, but it was due to zero procurement by the province.

The Sindh government had committed to procure 1.6 million tons in the season that ended in April but for the first time it did not procure even a single grain, he said.

The federal government has allowed the release of around 400,000 tons from Pakistan Agricultural Storage and Supplies Corporation (Passco) stocks for Sindh.

According to the minister, the price of 20kg flour bag is Rs810 in Lahore, Faisalabad, Multan and other cities of Punjab. In Peshawar, the price is Rs981 per bag and in Quetta it is Rs970 per bag. However, in Karachi and Hyderabad, the price is Rs1,113 per bag.

As Khyber-Pakhtunkhwa (K-P) and Balochistan are not self-sufficient in wheat supplies, the federal government provides them the commodity every year. The centre has decided to release 450,000 tons for K-P and 50,000 tons for Balochistan.

“With these releases, the flour prices will come down,” the food security minister stressed.

The prime minister has directed Passco to provide 200,000 tons of wheat for the Utility Stores Corporation. Utility stores have also been asked to ensure provision of five essential commodities – wheat flour, sugar, ghee, pulses and rice – at controlled prices all over the country.

Regarding the rising prices of bread (naan), the minister said the government was already bearing a subsidy of Rs1 billion on gas supply to the tandoors.

Talking about desert locust, the minister said it was for the first time after 30 years that the insect had attacked the country. “It is a migratory insect that has travelled from Yemen to Saudi Arabia, Iran, Sindh, Punjab and then to India,” he said.

“It is the insect’s migration time and from India it will gain come back to Sindh, Punjab and then to Balochistan, where we are planning to do aerial spray. However, the insect cannot be completely killed.”

Responding to a question as to why the government had increased the wheat support price by only Rs50 to Rs1,350 per 40 kg, the minister replied that as a grower he would like to increase the price to Rs1,600 but keeping in view the common man the price was raised by just Rs50.