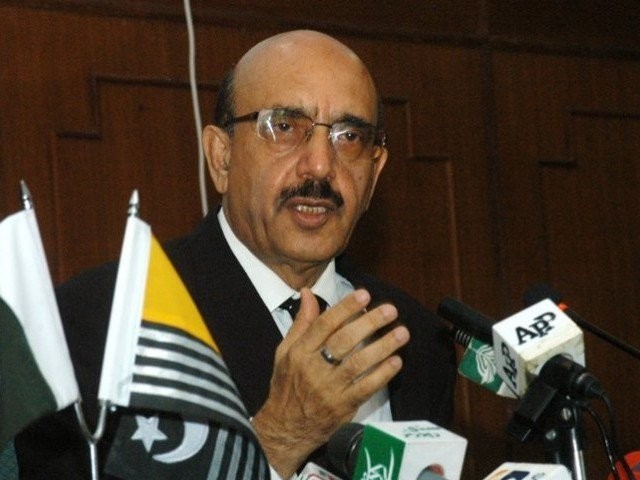 PESHAWAR: The time is ripe to come up with a new narrative on occupied Kashmir to expose India’s real face before the international community, said Azad Jammu Kashmir (AJK) President Sardar Masood Khan.

“Pakistanis and Kashmiris have potential to highlight Kashmir issue in the context of changing situation while getting India’s false narrative rejected by the international community,” he said while addressing a conference on ‘Exposing True Face of Fascist India: Pakistan’s Comprehensive Media Strategy’— jointly organised by Centre for Global & Strategic Studies (CGSS) and  Sheikh Zayed Islamic Centre on Thursday.

He urged Pakistani youth especially students to counter the Modi government’s propaganda through social media and appraise the world of brutalities being let loose by Indian troops in the disputed territory, which has been under lockdown since New Delhi stripped the Himalayan valley of its special status on August 5.

While suggesting the government in Islamabad, the AJK president said, “By using the tool of parliamentary diplomacy, Pakistan should reach out to important global parliaments to mount pressure on India.”

Appreciating CGSS for hosting the conference, he also urged students to expand their knowledge about the Kashmir conflict.

He asked students to be aware of major changes that have taken place in Indian Occupied Kashmir (IOK) after the August 5 aggression, and how the policies of incumbent Indian government implied on the disputed region are “affecting the Muslims of Kashmir and Pakistan”.

President Masood went on to say that important world parliaments, including Pakistan’s upper and lower houses, political parties, international media and people belonging to every segment of the society had expressed strong reaction over New Delhi’s illegal move on August 5 as well as demonstrated complete solidarity with the Kashmiri people.

“The Pakistan government knocked at the doors of the United Nation Security Council but unfortunately the UNSC failed to play its due role,” he added.

The AJK president reiterated that after August 5, Pakistan had two options — war and diplomacy — but Pakistan has chosen the latter. “If New Delhi indulges in any kind of adventurism, Islamabad is ready to go to any extent in its defence.”

He added: “The people of Jammu and Kashmir have been fighting for their freedom and democratic rights for the last 200 years, and they will continue their struggle till the realisation of their rights.”