The icy rock was visite­d by the NASA spaces­hip New Horizo­ns in Januar­y this year
By AFP
Published: November 14, 2019
Tweet Email 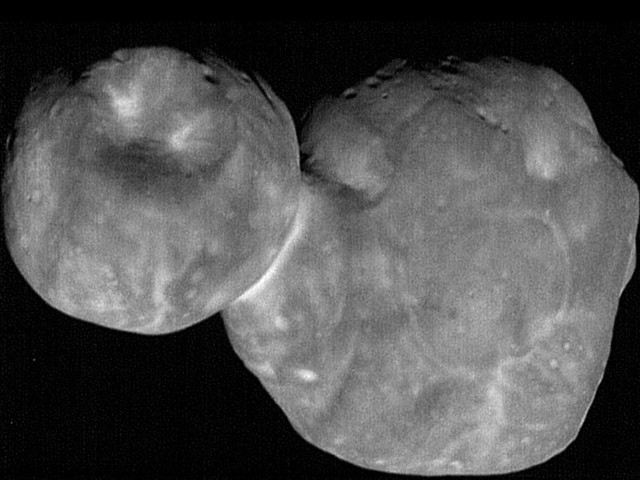 WASHINGTON: Ultima Thule, the farthest cosmic body ever visited by a spacecraft, has been officially renamed Arrokoth, or “sky” in the Native American Powhatan and Algonquian languages, following a significant backlash over the old name’s Nazi connotations.

The icy rock, which orbits in the dark and frigid Kuiper Belt about a billion miles beyond Pluto, was visited by the NASA spaceship New Horizons in January this year, with the first detailed images showing it consisted of two spheres stuck together in the shape of a snowman.

Its technical designation is 2014 MU69 but the New Horizon team initially nicknamed it Ultima Thule (pronounced Tool-ey) after a mythical northern land in classical and medieval European literature described as beyond the borders of the known world.

That name sparked a backlash, however, because it was co-opted by far-right German occultists in the early 20th century as the fabled ancient northern country of the “Aryan” people (the term they used to describe proto-Indo-Europeans).

Their Thule Society later became Adolf Hitler’s Nazi party, and the term remains popular in alt-right circles: it is, for example, also the name of a Swedish white-power rock group.

The new official name, which was chosen by the New Horizons team and ratified by the International Astronomical Union, was announced in a ceremony at NASA headquarters Tuesday. A subsequent NASA statement made no mention of the controversy.

“The name ‘Arrokoth’ reflects the inspiration of looking to the skies and wondering about the stars and worlds beyond our own,” said Alan Stern, New Horizons principal investigator from Southwest Research Institute, Boulder, Colorado.

“That desire to learn is at the heart of the New Horizons mission, and we’re honored to join with the Powhatan community and people of Maryland in this celebration of discovery.”

NASA added that they had received consent from Powhatan Tribal elders, and the name was chosen to associate the culture of the native people who lived in the region where the object was discovered.

Both the Hubble Space Telescope, which found the object in 2014, and the New Horizons mission (at the Johns Hopkins Applied Physics Laboratory) are operated out of Maryland, whose Chesapeake Bay region is home to the Powhatan people.

Responding to a query by AFP, NASA emphasised Ultima Thule was only ever a nickname — but did not comment on whether the Nazi controversy played a role in discarding it.

Astrophysicist Simon Porter, who works for the New Horizons mission, tweeted: “This took far too long, but I am happy with the result. #Arrokoth!”

Ocean McIntyre, a NASA science assistant, added: “Arrokoth is far better of a name for MU69 than Ultima Thule. I’m glad that the old moniker didn’t make the cut. Welcome to the newest member of the named solar system bodies — Arrokoth!”