Party kicks off ‘Plan B’ of its anti-govt moveme­nt
By ​ Our Correspondents
Published: November 14, 2019
Tweet Email 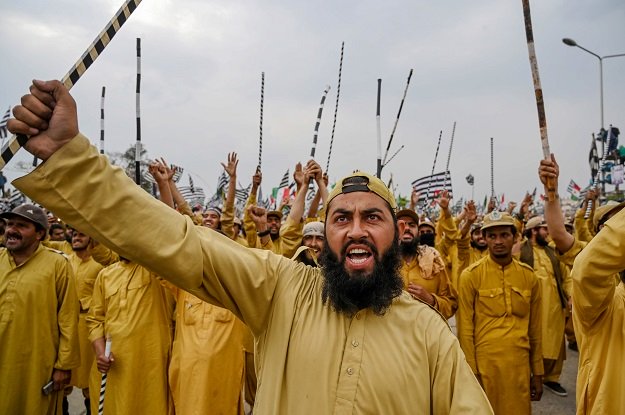 KARACHI / LAHORE / QUETTA / PESHAWAR: Activists of the Jamiat Ulema-e-Islam-Fazl (JUI-F) blocked major thoroughfares across the country as part of the party’s ‘Plan B’ of the anti-government ‘Azadi March’ after it brought its 13-day sit-in Islamabad to an abrupt end.

Despite the PPP distancing itself from JUI-F chief Maulana Fazlur Rehman’s ‘Plan B’ and saying that its government in Sindh would not allow activists to blocks roads, JUI-F activists barricaded the highway linking Karachi with Hub River Road.

The protest that began around 2pm forced locals to abandon their vehicles and walk home. Vehicles travelling between Sindh and Balochistan were diverted to Manghopir Road. JUI-F activists also blocked National Highway at Zero Point in Jacobabad.

In Balochistan, the party’s protesters in Khuzdar blocked the highway linking Karachi with Quetta. The JUI-F also staged a sit-in in Qilla Abdullah.

The party also staged a sit-in on Peshawar Road in the federal capital. Addressing the protesters, JUI-F General Secretary Abdul Ghafoor Haideri announced that the party would shut down Attock Bridge on Friday (today).

“The whole country will be shut down until this illegal and incompetent government steps down,” he said.

The protesters dispersed after Haideri’s speech to return the next day.

The party issued guidelines for the protesters, telling to allow ambulances and wedding caravans to pass through. It also instructed its activists to not block train traffic. The protesters were also told to avoid using sticks and not forcibly close shops.

The Chaudhrys of Gujrat, PML-Q chief Chauhdry Shujaat Hussain and his cousin Punjab Assembly Speaker Chaudhry Pervaiz Elahi, again met the Maulana on Thursday to negotiate with him on the government’s behalf.

Speaking to the media after the meeting, the JUI-F chief said his party would not have been compelled to extend its protest across the country if Prime Minister Imran Khan had resigned.

“We don’t want violence and want to keep our protests peaceful. The authorities should also recognise our right to protest,” he added.

“The year 2020 is too far away. I see elections [taking place] much earlier,” he responded to a reporter’s query.

The JUI-F chief also condemned the government for demanding an indemnity bond for allowing former premier Nawaz Sharif to travel abroad for medical treatment. “This action reveals the current rulers’ lack of morality,” he added.

Shujaat and Pervaiz also backed the call for allowing the ailing politician to leave the country without imposing any conditions.

They also praised the Maulana for staging a massive sit-in. “The massive sit-in shows that he [Maulana] is the only opposition leader,” Pervaiz told reporters.

Later speaking to a private TV channel, the Punjab Assembly speaker advised the government to let the Sharif family patriarch leave for medical treatment without imposing any terms.

“Talking about money and humanity at the same time doesn’t go well,” he added.

With additional input from our correspondents in Islamabad and Quetta