As JUI-F announ­ces it will go for Plan B, expert­s suspec­t the PTI may be forced to offer relief to Sharif and Zardar­i
By Tufail Ahmed / Aamir Khan
Published: November 14, 2019
Tweet Email 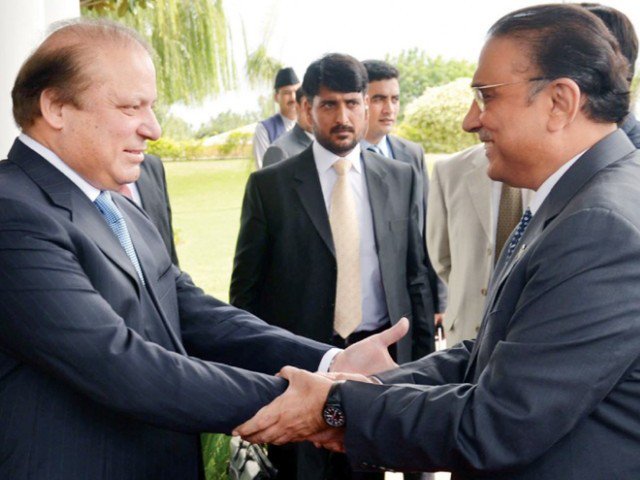 KARACHI: Pakistan’s political landscape is in the midst of a tumult, and it goes against Prime Minister Imran Khan’s unrelenting public campaign against signing another blanket corruption waiver, which will ultimately pave the way for the exit of his opponents.

Pilloried for financial misappropriation and a laundry list of other charges by the government, former prime minister Nawaz Sharif, might leave the country anytime on medical grounds.

In striking contrast with Prime Minister Imran Khan’s stiff policy of ‘no relief’ for ‘corrupt leaders’, the move would seem to be a sort of ‘medical NRO’, a euphemism coined to de-emphasize the notoriety attached to the National Reconciliation Ordinance promulgated a slew of case against his political opponents at the time.

The concession ultimately forced the dictator out of office in 2008, but it paved the way for the return of self-exiled former prime ministers Benazir Bhutto and Nawaz Sharif to Pakistan.

Despite vehemently opposing the idea of providing any relief to political leaders accused of corruption, it seems the Imran administration is mulling over letting Pakistan Muslim League Nawaz (PML-N) leader leave the country. Sharif suffers from several health issues that might require the ousted premier to travel to the United Kingdom for treatment.

Two years ago, an anti-corruption court indicted Sharif over allegations involving his family’s ownership of expensive London property. The verdict paved the way for the imprisonment of the PML-N leader. Since returning to Pakistan last year, the former prime minister has been in prison.

Three-time deposed prime minister Sharif, 69, was released on bail last month after repeated medical issues. Since then, the government has been deliberating on letting him leave the country.

If Sharif agrees to the conditions set by the government for striking his name off the no-fly list, he would leave the country for treatment.

Political analysts believe Sharif’s departure will clear the path for other jailed politicians facing corruption charges to seek similar concessions from the government. Former president and Pakistan Peoples Party (PPP) supremo Asif Ali Zardari is one of them. Zardari is behind bars on money laundering charges.

Sources familiar with the matter believe, Zardari, who also faces several health challenges, is hoping to get some leeway, allowing him to receive treatment in Karachi.

Once Sharif leaves the country, Zardari might request a transfer from the Pakistan Institute of Medical Science, where he is currently receiving treatment, to Karachi. To make the move happen in the next 30 days, a medical board headed by Dr Asim Hussain, a close confidante of the former president, is expected to make the recommendation.  Although an accountability court turned down an application submitted by the PPP leader requesting that he be shifted to Karachi, his party is hopeful that the government will extend the some concession to him on medical grounds.

Rumors are rife that under pressure from the recently announced country-wide protests by the Jamiat Ulema-e-Islam Fazal, the government might be willing to give some relief to both PPP and PML-N leaders.

In response to a question about the possibility of Sharif and Zardari receiving a concession on medical grounds, All Pakistan Muslim League leader Tahir Hussain Syed said: “The government is under pressure from the JUI-F protest and might want to fracture the opposition by giving some relief to PML-N and PPP leaders.”

Both parties, however, have openly rejected that this is a medical NRO or a blanket waiver against corruption charges and court verdicts.

PPP Sindh secretary general Waqar Mehdi claimed that the party never took the NRO. “Asif Zardari is unwell and it is the government’s responsibility to provide him treatment.” “PTI might face a similar situation in the future,” he cautioned.

On the other hand, PTI leader Jamal Siddiqui denied all rumours regarding the possible relief for the two leaders. “The government will continue its campaign against corruption and accountability across the board,” he claimed.

While dismissing all rumours, PML-N’s Ali Akbar Gujjar said his party chief requires serious medical attention and should be allowed to leave the country for treatment.

‘One in two people with diabetes are undiagnosed’