CPO says they are prepar­ed to cope with any untowa­rd situat­ion
By Saleh Mughal
Published: November 14, 2019
Tweet Email 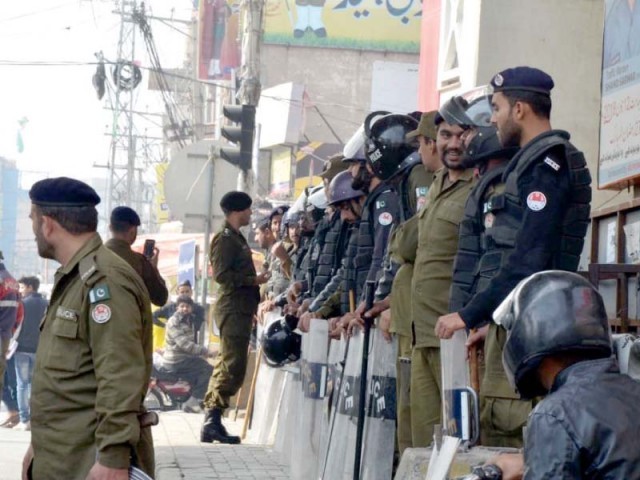 RAWALPINDI: Police in riot gear scrambled to take positions at sensitive locations across the garrison city soon after the Jamiat Ulema-e-Islam-Fazl (JUI-F) supremo Maulana Fazlur Rehman announcement to end his 12-day protest in the federal capital and start blocking major roads and thoroughfares across the country.

Responding to the situation, Rawalpindi City Police Officer (CPO) Faisal Rana said that they are prepared to cope up with any untoward situation.

Shortly thereafter, heavy contingents of reserve police were deployed at 17 locations marked as ‘trouble points’ across the city, the Rawalpindi police chief said.

He further explained that police have marked 21 points across the Rawalpindi division and 17 in the district where protesters could create a lockdown-like scenario.

Meanwhile, heavy deployment of police and Rangers was observed on Faizabad, Murree Road, Double Road, and Chungi 26 on Wednesday.

CPO Rana said that apart from police contingents, units of the paramilitary Pakistan Rangers have also been deployed at various sensitive spots across the city.

SSP Wilayat said that their priority was to maintain law and order and establish the writ of the government.

He added that the miscreants will not be allowed to spread anarchy and directed officers to remain vigilant while performing their duties.

Wilayat further pointed out that it was their responsibility to protect private and public property.