JUI-F begins blocki­ng roads, highwa­ys across countr­y as Fazl refuse­s to budge on his demand for PM's resign­ation
By ​ Our Correspondent
Published: November 14, 2019
Tweet Email 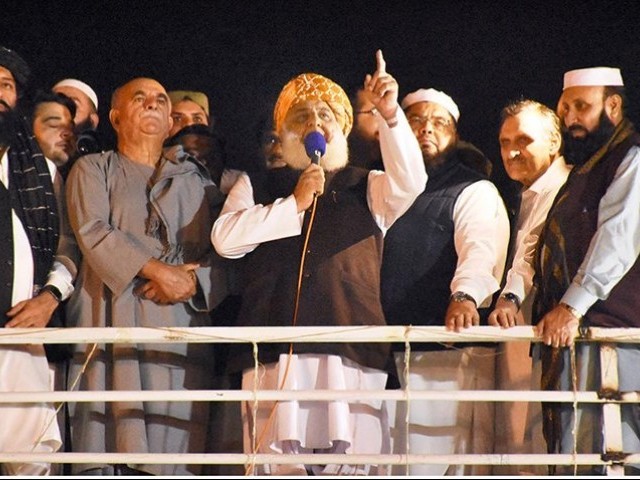 ISLAMABAD: A media guessing game began Wednesday evening about the political gains of 13-day dharna of the Jamiat Ulema-e-Islam-Fazl (JUI-F) after Maulana Fazlur Rehman abruptly called off his dharna in the federal capital where thousands of his followers and activists of allied parties had been camping since November 1, calling for Prime Minister Imran Khan to step aside and call fresh elections.

Addressing the dharna participants from atop a purpose-built shipping container, the politico-religious cleric announced that the protest movement set off by the ‘Azadi March’ would now spread to every nook and cranny of the country as part of ‘Plan–B’ that envisages blockade of “major arteries and highways – and even bylanes and streets”.

However, he advised his supporters to remain peaceful on the “second front” while appreciating their perseverance, peaceful demeanour and discipline throughout the 15-day ‘Azadi March’ and subsequent dharna which, according to him, had been “acknowledged by the whole world”.

The dharna had stirred up commotion in the country’s politics when thousands of activists of the JUI-F and allied parties descended on the capital — at one point threatening the embattled government, but then the number of protesters dwindled because of cold weather.

After initial attempts to engage the JUI-F – which triggered a flurry of activity – government negotiators had given up after Maulana Fazl refused to budge on his demand for the prime minister’s resignation.

While calling upon roads blockade, the JUI-F chief said the life of every Pakistani policeman, every FC and Rangers personal, and every army soldier was as dear to him as the life of every activist of his party.

He admitted that his party wanted to ratchet up pressure on the government because an “illegitimate rule is not acceptable to us”.

He urged the state institutions to not confront the protesters because “we don’t want confrontation” and warned that “if our activists are stopped in one place, they will emerge at another place”.

Though he didn’t name anyone, he was believed to be referring to security institutions.

Soon after the Maulana’s announcement, JUI-F activists started blocking roads and highways in different cities, especially in Balochistan where the politico-religious party has a huge support base.

The cleric said one person has been put in charge of arrangements for sit-in protests at every location who, in consultation with local leaders of the allied parties, would devise a strategy for local sit-in.

He called upon “every Pakistani” to participate in these sit-ins in droves while advising them to ensure their protest does not cause any inconvenience to common citizens.

The Maulana empowered them to decide for how long they continue the road blockades while reminding them that the JUI-F did not want to harm the country.

He renewed his demand for the resignation for Premier Imran Khan, saying that “every day of the illegitimate government is plunging the country into economic abyss”.

The JUI-F chief repeated the oft-repeated ‘charge-sheet’ of the opposition parties against the government, saying that while economies of all regional countries were growing, Pakistan’s economy was on a downward slide and foreign investment had dried up.

“This means our government is not a representative government. People don’t pay taxes because they don’t trust the government. The international community is not willing to help, while foreign investors are reluctant to invest here,” he claimed.

He said the main objective of his movement was to rid the country of the incompetent rulers and he would not budge an inch on this demand. “We will have to step up pressure on the government to quit and call fresh general elections in the country.”

“The government was under the assumption that the end of the Islamabad dharna would ease its woes,” he said. “But now the information we’re receiving from government circles and from the administration show that their foundations have been shaken in every district of every province.”

He dismissed the “taunts from certain quarters” which, he said, were meant to “hurt and demoralise” the protesters.

“Our Azadi March is meant to rid the nation of the illegal and illegitimate government and to rid the country of foreign pressure. All institutions should support our march because our fight is not an individual’s or a party’s fight,” he added.

The JUI-F chief accused the government of “Kashmir sell-off” — a move which, according to him emboldened India to hand over Babri Masjid to Hindus.

He was referring to a recent Indian Supreme Court verdict which handed over the site of Babri Masjid, which had been demolished by Hindu fanatics in 1992, to Hindus.

The ‘Azadi March’ was organised at a time when the government was highlighting the siege of Indian Occupied Kashmir at the international level.

And government ministers have said that the Maulana’s protest sabotaged theoe efforts by taking the global spotlight off the Kashmir atrocities.

The JUI-F chief; however, sought to dispel the impression and assured the Kashmiris of his party’s “unwavering support” at every forum.

He brushed aside criticism of his ‘Azadi March’ which, according to critics, has failed to achieve anything tangible. “We are called a small party in parliament but our movement has morphed you into a big party,” he said amid a thunderous endorsement from his supporters.

He said the JUI-F supporters had become the “pivot of Pakistani politics”.

“The country’s politics is revolving around your movement and the illegitimate rulers in parliament and their stooges are in a state of fear,” he claimed.

“Democratic norms and supremacy of the Constitution had eroded by the dictatorial mind-set, but you have defeated [that] mind-set and safeguarded the Constitution and democracy in the country.”

While explaining ‘Plan B’, the JUI-F chief’s brother Maulana Attaur Rehman said that not only major highways, but by-lanes and streets would also be blocked, starting 2pm on Thursday.

He said that GT Road between Peshawar and Rawalpindi will be blocked on Thursday, while the National Highway in Sindh, the Quetta-Chaman road in Balochistan, the Silk Road in Khyber-Pakhtunkhwa and the Indus Highway in Punjab have already been blocked.