The singer is unabas­hedly in love with his wife Chriss­y Teigen and a doting father to their kids
By Entertainment Desk
Published: November 13, 2019
Tweet Email 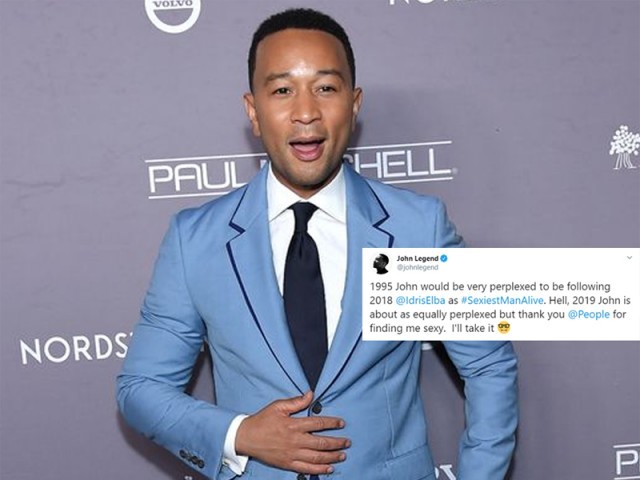 Singer John Legend has an Emmy, Grammy, Oscar and Tony, and now ‘one of the nicest guys in Hollywood’ has been crowned this year’s Sexiest Man Alive by People.

The All of Me singer has another feather to add to his cap with his new title. After taking home his first Grammy in 2006 with his debut album Get Lifted, the 40-year-old began a steady ascension to super stardom.

When Legend weighed in on how he felt about his Sexiest Man Alive status after 2018’s winner Idris Elba, he revealed he was perplexed and made fun of the comparison.

1995 John would be very perplexed to be following 2018 @IdrisElba as #SexiestManAlive. Hell, 2019 John is about as equally perplexed but thank you @People for finding me sexy. I'll take it pic.twitter.com/Gw1la5Ebv4

“1995 John would be very perplexed to be following 2018 @IdrisElba as #sexiestman alive,” he wrote on Twitter after the announcement. “Hell, 2019 John is about as equally perplexed but thank you People for finding me sexy. I’ll take it.”

The humble tweet comes as no surprise, considering Legend is unabashedly in love with his wife Chrissy Teigen and a doting father to their kids – all while remaining one of Hollywood’s biggest stars.

Jokes aside, the singer also had a mix of emotions about the news. “I was excited, but I was a little scared at the same time because it’s a lot of pressure,” the entertainer told the magazine. “Everyone’s going to be picking me apart to see if I’m sexy enough to hold this title. I’m also following Idris Elba, which is not fair and is not nice to me!”

When asked who his first and biggest fan is, Legend said it will always be his mother Phyllis. “Whenever we had opportunities to sing in church or in school, my mom would suggest that I do it. She always encouraged me.”

Was thrilled to honor my wife with @baby2baby's Giving Tree Award on Saturday. Thanks to this organization for doing so much to help families in need!

Legend is the publication’s 34th Sexiest Man Alive, joining a long list of Hollywood’s hottest, starting with a then-29-year-old Mel Gibson in 1985.