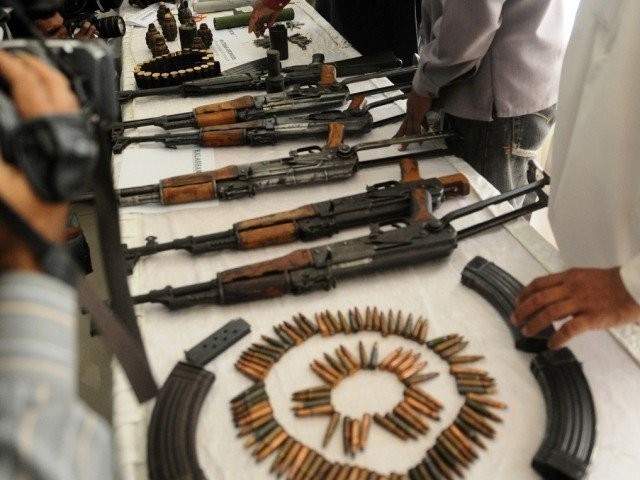 LAHORE: Despite claims of an ongoing crackdown against illegal weapons and the display of arms, Police have failed to control the transportation of firearms in the city.

Cases of suspects reaching sensitive installations with firearms are rampant across the provincial capital. Additionally, every other day, a murder case, in which a firearm is used, is widely reported. In a similar case on Monday morning, a shootout, involving heavy ammunition and a prohibited bore weapon, was reported outside Ferozwala Kutchery in Shahdara.

The suspects used Kalashnikovs, repeaters and pistols in the offence. The incident occurred after two rival groups, appearing before the court to follow a case, came face to face.

After the incident, local police and the Dolphin Squad reached the spot and took at least 12 people into custody. They also recovered two AK-47s, a repeater, a 44 bore pistol, two 9 mm pistols and other weapon from their custody.  A case has also been registered against the suspects in Shahdara Town police station. Police said that the suspects were involved in serious offences and operated like gangs in the past as well. Deputy Inspector General of Police Operations, Ashfaq Ahmad Khan, appreciated SP City, the Dolphin Squad and Shahdara Town police for their timely response when it came to saving the lives of citizens.

Two days ago, at least five persons were murdered after two rival groups resorted to firing in Batapur. The groups were reportedly also going to appear before police for investigation purposes.

These are just not the only two cases. Each year, an average of over 350-400 murder cases are being registered in the city. Authentic crime data, available with The Express Tribune, showed that at least 269 murder cases were registered during January 1 to November 9 in 2017. The figure rose up to 310 in 2018 during the corresponding time period. As many as 274 murder cases have been registered in the current year. The data further showed that 38 cases of unsolved murder were registered during the period of January 1 to November 9, 2017. These cases rose to 61 during the period in 2018 and decreased to 43 in 2019.

An analysis of murder cases and data showed that the transportation of weapons was not difficult. An overview showed that the suspects, in the chase of their rivals, managed to not only infiltrate sensitive installations with lethal weapons, but also shot their opponents dead at locations of their choice. The areas varied from inside the airport, courts, the hub of the city, peripheries and in the presence of police.

Heavy patrolling by Dolphin Squad, Police Response Unit (PRU) and crackdown against illegal weapons could not serve as a respite.

Here are a few glimpses of cases in and outside important buildings. In July 2019, at least two men were murdered inside the airport international arrival lounge. A day after the killing, a few suspects related to the mentioned murder, who carried heavy ammunition, had been arrested outside Anti-Terrorism Court Lahore.  A few days before the incident, another group of suspects was  busted with heavy ammunition outside the court. In January 2018, a head constable and a murder suspect were shot dead inside the sessions court. The deceased, Amjad, was in custody for a murder case.

A trader Sheikh Irfan Channa was shot dead in Mozang, an important business hub of the city. Heavy ammunition like AK-47s was used for the killing.

In July last year, a hired assassin shot dead a murder suspect in the district kutchery premises and in the presence of police. A few weeks ago, SHO Lower Mall was injured after a dispute arose during a reconciliatory meeting.