I’m floored before it even starts. Everyone is. Literally. Since childhood, I have had a profound dislike for sitting on the floor, but as soon as the first drone-like tone – a low F - rings out from Babar Sheikh’s bass, I am transported beyond the carpeted floor of the PACC auditorium, and into the world of Chand Tara Orchestra (CTO). 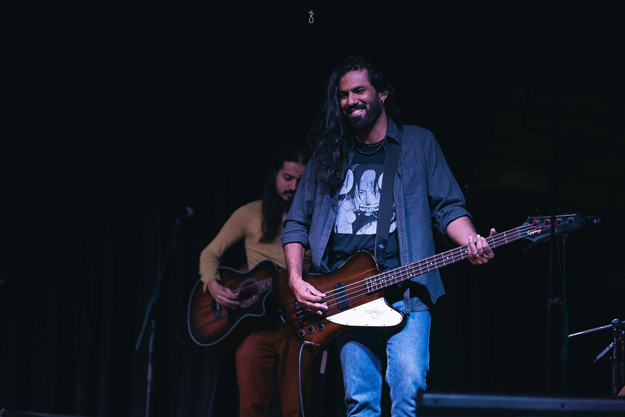 In keeping with the concert date, the eve of the birthday of the Holy Prophet (PBUH), CTO kicks off with a naat praising the Prophet (PBUH). And I can’t help thinking that this is probably the most innovative way of paying our respects to Him (PBUH). The skillful and tasteful merging of the 900-year-old qawwali tradition - sprung from Sufis combining old Indian ragas with words of the Prophet (PBUH), Qaul - and the electric bass and guitar is sublime. It’s arena rock with a spiritual depth that would make Journey want to convert or learn Urdu, or both.

However, with some knowledge of classical singing, I can’t help but admire the voice and technique of CTO’s singer Sherry. With a blend of raw power and meticulous control of his vocal cords, he multiplies the sound of the band. In every phrase you can hear his devotion to the lyrics, as he uses his full range to push the texts of each song; all Sufi poetry, into the modern age. Hearing his operatic lyrical voice, I can’t help asking myself what the 3 tenors would have sounded like if they had had the courage to explore eastern music. 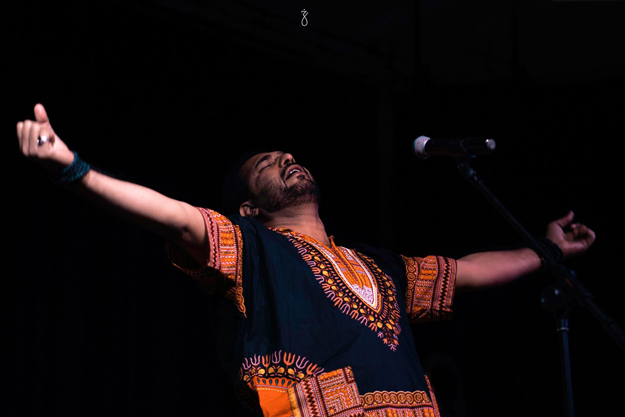 It is surprisingly relaxing to listen to CTO, and it’s all thanks to the complete sense of comfort that the musicians exude. Apart from tonight’s acoustic guitarist (Umair Dar), who is not part of the original lineup and feels like he’s still trying things out with CTO, everyone on stage is just doing their thing with the same amount of confidence that the rest of us sing in the shower. Sometimes they miss a chord or a note, but the audience is more than willing to forgive them because we’re all just having fun and doing what we love.

CTO then plays Rung De, a crowd favorite and probably what Bruce Springsteen would have sounded like if he spoke Urdu. After an energetic guitar solo by Omran Shafique (who is just back in Pakistan from a US tour with Junoon), the song ends with Sheikh and Shafique sandwiching singer Sherry in a glorious musical Bun Kebab. CTO then releases us into ecstasy with Jhoolay Jhoolay Lal Dum Mast Qalandar. 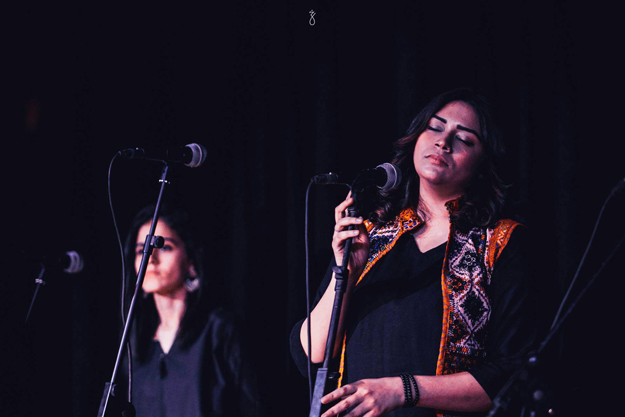 After a short break, we’re back on the floor to see Sounds of Kolachi (SOK). We’re familiar with the space by now; the lights, the speakers, the carpet on the floor, the drummer. Hang on. Why is the drummer from the first set still here? It turns out Aziz Kazi, Karachi’s if not Pakistan’s most prolific drummer, who has played several seasons of Coke Studio as a percussionist, is playing drums with both bands this evening.

Compared to CTO, SOK’s 10-person set looks like a pious army of musicians on stage. With the Sarangi (a small South-Asian fiddle) on one end and Ahsan Bari’s key-less synth on the other, it’s clear we’re in for an experimental journey. SOK’s creator Bari kicks off the evening with wordless vocalization, but then leaves the singing to the 4-person crew at the back of the stage and assumes the role of conductor. But instead of using the normal baton as a western conductor, Bari uses his entire body and energy, bouncing up and down on stage, to drive the music forward. 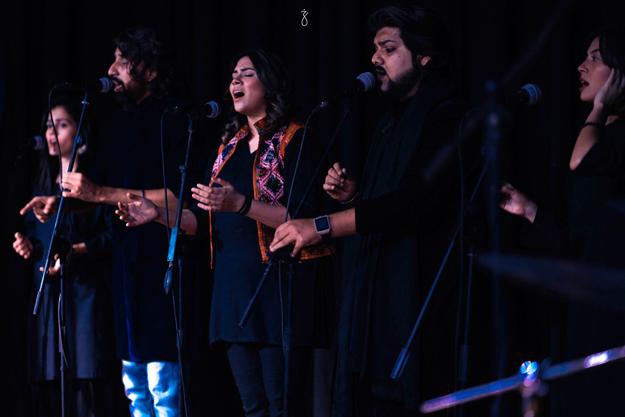 After a few songs, it is clear that SOK is laser-focused on maximising the musical expression. Most of the songs have nonsense lyrics, allowing the listener to focus solely on the rhythm and the harmonisation of the various instruments and voices on stage. Perhaps the most exciting voice of the evening is the clear soprano of Nimra Rafiq. She clearly emerges as the female lead singer of the band, constantly surprising the audience by adding tones to her range and seamlessly delivering a pitch-perfect sound. 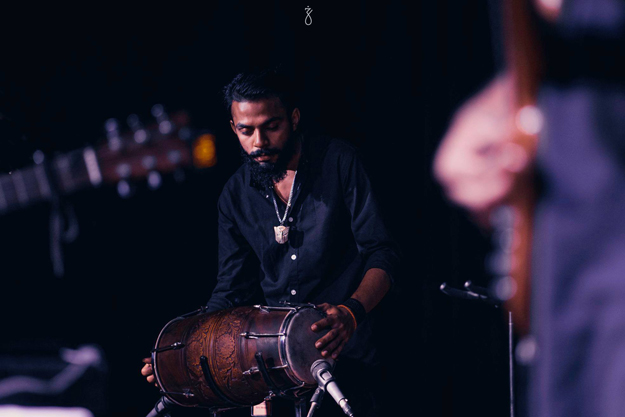 To add fuel to the fire started by SOK’s massive sound, they invite CTO back on stage for what Bari tells us is an ‘advanced jam session’. We have Sherry back on the vocals, together with Nimra and Bari and the rest of the SOK vocal lineup. We have Sheikh back on the bass, Shafique on the guitar as we kick off the climax of the evening. The singers take turns, praising the Prophet (PBUH), Allah, Ali (RA), and other venerated figures with well-known devotional verses and invite the audience for a sing-along. 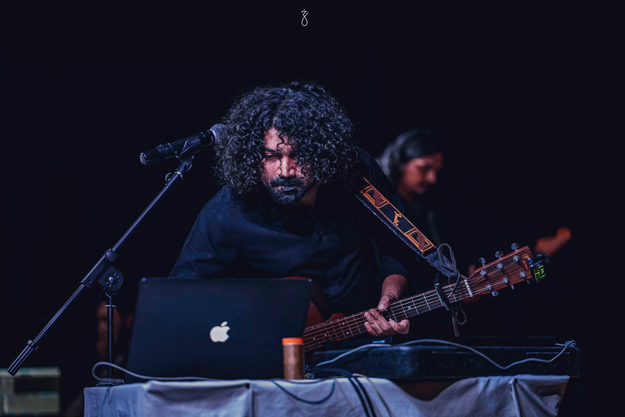 The last note of the evening fades out just as the Prophet’s (PBUH) Birth anniversary starts. As I emerge from the venue, I am not sure if what I just experienced was a rock concert, a spiritual awakening, or both. I feel floored, figuratively speaking this time. And for once, the Karachi night, decked out with lightbulbs in green and white to celebrate His birthday, doesn’t break the mirage just created by Chand Tara Orchestra and Sounds of Kolachi. Sometimes, this city can help keep the dream alive. Perhaps you just have to pick the right one.