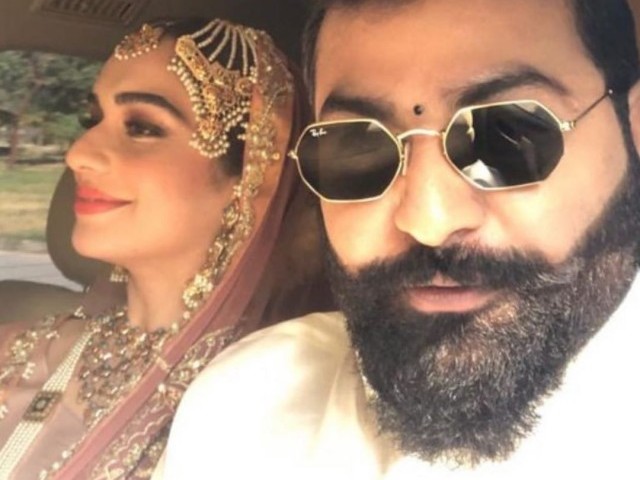 Seems like designer Ali Xeeshan has tied the knot in a ceremony this afternoon.

A selfie of Xeeshan and his bride was shared on Instagram stories, where the duo can be seen in formal traditional wear to mark the festive occasion in Islamabad.

“Lots and lots of love to my pal Ali Xeeshan on tying the knot with this beauty,” said Elan’s creative director Khadijah Shah on her social media handle.

The bride, an educationalist named Myrah Khan, was spotted in the car with Xeeshan donning a blush pink veil with statement jewelry including a pearl-encrusted tikka. Xeeshan sat next to her in what looks to be a white traditional suit.

The celebrated fashion designer is known for his elaborate bridal gowns and unconventional fashion shows. Xeeshan also often chooses to spread some kind of message through his creations.

On your birthday, team Ali Xeeshan Theater Studio would like to express sincere gratitude to have you as our boss, leader, and mentor. Hope the next year brings you many new fantastic experiences, Happy Birthday! #AliXeeshan #AliXeeshanTheaterStudio #AliXeeshanEmpire

In an interview with BBC Asian Network, Xeeshan recalled one of his most talked about fashion shows where models carried monkey dolls with them as a part of their ramp walk.

The designer said, “Most of the time in Pakistan, brides are treated like monkeys. They don’t have any say. They would be told to smile less or smile more, or to wear this or wear that, as if they were a product. That’s how I came up with the monkey doll. It’s a symbol for Pakistani brides.”

A car accident at 17 saved my life: Jameela Jamil