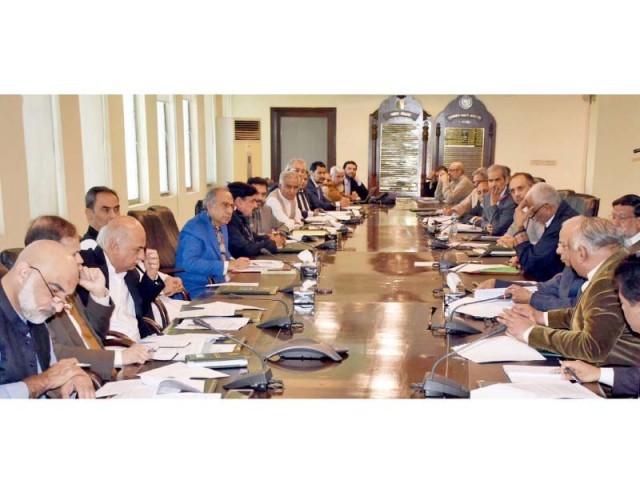 ISLAMABAD: Pakistan decided on Friday to continue supplying imported liquefied natural gas (LNG) to two power plants, even after their privatisation, for six more years, which the Power Division claimed would place an extra burden of Rs471 billion on consumers due to a high fuel cost.

For the second consecutive meeting, the Economic Coordination Committee (ECC) of the cabinet discussed a summary of the Power Division about gas sale and power purchase issues related to the National Power Parks Management Company Limited (NPPMCL).

NPPMCL owns two power plants located at Balloki and Haveli Bahadur Shah having a combined generation capacity of 2,453 megawatts and settlement of these issues were critical before inviting Expressions of Interest (EOI) from prospective investors.

Some of the issues between the Power Division and the Petroleum Division still remain unsettled which the ECC would again discuss in the next meeting.

The ECC has given the go-ahead to the Privatisation Commission for fast-tracking privatisation of NPPMCL while issues pertaining to the review and adjustment of risk allocation under the power purchase agreement (PPA) would be considered again in the next ECC meeting for a final decision, according to a statement issued by the Ministry of Finance on Friday.

A senior government official told The Express Tribune after the meeting that the ECC decided to keep unchanged two existing conditions – minimum guaranteed LNG offtake of 66% and force majeure in case of non-supply.

In the meeting, the ECC noted that the change in volume of gas supply to the two plants, managed by NPPMCL, would not affect privatisation of the company as capacity payments of both the plants were ensured under the power purchase agreement, said the finance ministry.

Therefore, it added, the ECC decided that the Privatisation Commission should go ahead with its transaction.

Under the existing legal arrangement, there is a minimum guaranteed offtake of 66% of LNG imported from Qatar on an annual basis.

Pakistan has signed a gas deal with Qatar for 15 years on a “take or pay” basis and it cannot be renegotiated for 10 years, which will end in 2025.

The Power Division was of the view that cheaper energy sources – hydel and nuclear – would be available to run the plants, therefore, the use of LNG in these two power plants would cost an extra Rs471 billion from 2019 to 2025.

Owing to the expensive fuel and the condition of must-operate, the Power Division was of the view that it was not recommended to ensure minimum guaranteed gas offtake of 66% for the plants and suggested withdrawing it.

The Power Division proposed that the annual production plan would continue without a minimum guaranteed offtake of 66% and would be reflected in the revised PPA, gas sale agreement (GSA) and implementation agreement (IA) to be executed for the purpose of NPPMCL privatisation.

Contrary to the Power Division’s proposal, the Petroleum Division stated that PSO’s agreement with Qatargas, wherein the offtake was guaranteed, could not be reviewed before 2025. As such, the existing structures of the PPA, GSA and IA are required to be maintained for the purpose of privatisation. The ECC endorsed the Petroleum Division’s stance.

The Pakistan Tehreek-e-Insaf (PTI) government wants to sell NPPMCL in the hope of fetching Rs300 billion in non-tax revenue. Financial advisers have been hired to suggest the transaction structure while keeping in mind the financial and legal parameters.

Following the green signal from the ECC, the Privatisation Commission is expected to issue EOIs in the next few days. However, it will miss the deadline for completing the privatisation by December 2019. It now expects to complete the transaction in the third quarter (Jan-Mar 2020) of the current fiscal year.

The Power Division had recommended that in case the government was contractually bound to adhere to the PSO agreement with Qatargas up to 2025, it should withdraw the existing minimum guaranteed offtake of 66% immediately after the review period in 2025.

Till 2025, it proposed that the difference between LNG requirements for these two power plants as per economic merit order and the LNG requirement for the minimum 66% guaranteed offtake should be utilised by other sectors of the economy and sold back to the spot market and the difference to be paid by the power purchaser.

The Finance Division refused to bear the cost of subsidy on account of price differential and the cost would be borne by the consumers.