Weary residents of Islamabad endure another round of protests

Weary residents of Islamabad endure another round of protests 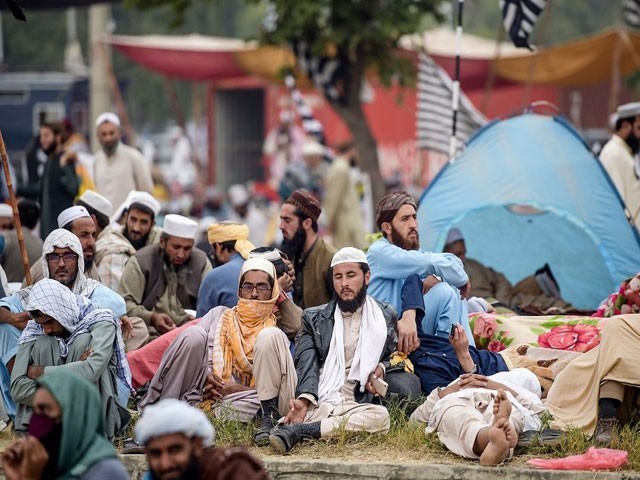 ISLAMABAD: Patience is wearing thin among some residents of the capital enduring another round of anti-government protests, with tens of thousands of opposition supporters showing no sign of giving up despite the onset of winter rain.

Huge crowds descended on Islamabad from various parts of the country a week ago, denouncing the government of Prime Minister Imran Khan as illegitimate and calling for him to step down.

It is the first concerted challenge that the premier has faced since he won a general election last year promising to end corruption and create jobs for the poor.

PM Imran has dismissed the calls to resign and his government, which the opposition says won power after a rigged election, has denounced the protests as a threat to democracy.

The protesters are occupying a large open area alongside one of Islamabad’s main roads, the latest in a succession of drawn-out sit-ins over recent years, including one PM Imran himself, led against the previous government.

“This is the third sit-in since 2014 in Islamabad – it has to stop if this country wants to progress,” said office worker Ghazanfar Ali, 47.

The capital’s sole public transport system, which runs by the protest site, has been suspended and Ali said, he had to spend twice as much getting to work.

Student Zeeshan Azeem, 17, said the internet had been down at his home all week, which he blamed on government attempts to disrupt the protesters’ communications.

“We’re forced to travel a considerable distance from the protest site to use the internet,” said Azeem, clutching his books as he headed home from school.

The protests are being led by JUI-F, with the support of the two main parties Pakistan Muslim League-Nawaz (PML-N) and Pakistan People’s Party (PPP). The huge crowd is almost exclusively made up of bearded men, waving flags and chanting slogans.

They have set up a tent city with plastic sheets, and cook and rest when their leaders are not giving speeches. The mood has been cheerful and there has been no significant trouble.

The biggest problem has been the onset of cold rain.

PM Imran said on Twitter this week he had directed city authorities to assess what help could be provided for the protesters. The opposition leaders declined the offer.