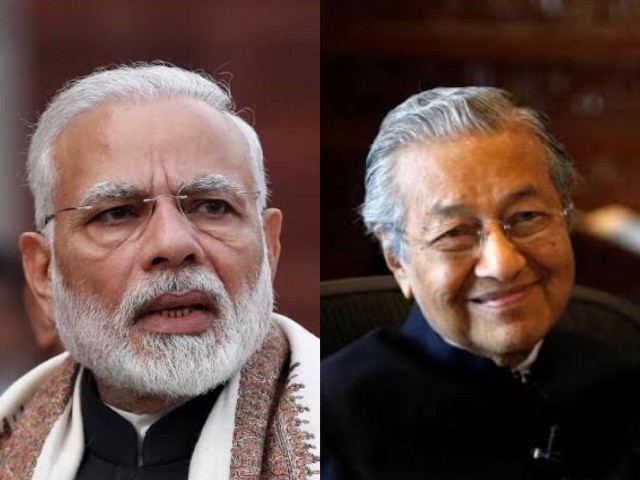 JAKARTA: A diplomatic row between Malaysia and India has spilled over into trade relations between the two countries.

India was angered after Malaysian Prime Minister Mahathir Mohamad said New Delhi had “invaded and occupied” Jammu and Kashmir during his address in New York City at the 74th session of the United Nations General Assembly on September 27.

“We felt that the people of Kashmir had benefited from the UN resolution, and all countries should abide by it, not just India or Pakistan but even the United States. Otherwise, what’s the use of having the UN?” Mahathir told reporters in Kuala Lumpur on October 22.

He also criticised India for revoking the special status of Jammu and Kashmir, which has a Muslim majority population.

As a result, numerous posts with the hashtag #BoycottMalaysia from users in India were trending on Twitter. Malaysian users responded with #BoycottIndia tweets.

Mahathir admitted that his remarks at the UN had strained ties between the two countries and described the current situation as a “trade war” between the world’s biggest exporter of palm oil and largest buyer of the commodity.

The Solvent Extractors’ Association of India (SEAI) on Monday asked its 875 members to stop buying Malaysian palm oil due to Mahathir’s firm stance over the Kashmir issue.

“In your own interest as well as a mark of solidarity with our nation, we should avoid purchases from Malaysia for the time being. We trust you will heed our advice,” said SEAI president Atul Chaturvedi in a statement.

Malaysia will most likely lose a lot in foreign exchange as India is the world’s biggest importer of palm oil. In 2018, Malaysia exported 6.84 billion ringgit (US$1.65 billion) worth of palm oil to India.

But Primary Industries Minister Teresa Kok said the Malaysian government was not worried about the palm oil embargo.

“India never [officially] said they wanted to boycott or ban the import of palm oil from Malaysia. The statement came from the traders association, not the Indian government,” she said.

Likewise, Malaysian Economic Affairs Minister Azmin Ali said a boycott of the country’s palm oil by Indian traders will likely not be prolonged, as there are not enough supplies from top producer Indonesia to cover the shortfall.

“We are confident that we will be able to resolve this issue immediately and effectively,” he told parliament Wednesday.

Dialogue as solution on Kashmir

During the 74th UN General Assembly, Turkish President Recep Tayyip Erdogan called for dialogue as the solution to the dispute between India and Pakistan over Kashmir.

Erdogan stressed that the stability and prosperity of South Asia cannot be separated from the Kashmir issue.

“In order for the Kashmiri people to look at a safe future together with their Pakistani and Indian neighbours, it is imperative to solve the problem through dialogue and on the basis of justice and equity, but not through collision,” he said.

The India-occupied region of Kashmir has been facing a clampdown since August 5, when India revoked Article 370 of its constitution which conferred a special status on Jammu and Kashmir.

Hundreds of people – mostly political leaders – have been detained or arrested by authorities since the Indian government’s move.

China also controls part of the contested region, but it is India and Pakistan who have fought two wars over Kashmir.

Dinna Wisnu, a faculty member and lecturer at the Department of International Relations at Bina Nusantara University in Jakarta, said both Malaysian and Indian leaders seemed to want to bring their domestic problems to an international forum. “It might not happen,” Wisnu told Anadolu Agency, referring to the boycott call by Indian traders.

Fitri Bintang Timur, an international relations analyst at the Centre for Strategic and International Studies in Jakarta, said Mahathir wanted to show solidarity with Pakistan.

She assured that the spat would not bring security risks for Indians in Malaysia and vice versa as citizens of both countries are heavily involved in business and investment sectors.

Timur said the two countries must do their best to reduce the excessive impact and also suggested bilateral diplomacy to resolve the issue.  “India can summon the Malaysian ambassador to provide an explanation and approach Mahathir and his advisers personally,” she said.

Timur noted that equal and fair dialogue can be the way out of the diplomatic row between the two countries.

Hundreds arrested ahead of verdict on India’s Babri mosque