Flick is tempor­arily in charge after Kovav was sacked after 5-1 drubbi­ng
By Reuters
Published: November 7, 2019
Tweet Email 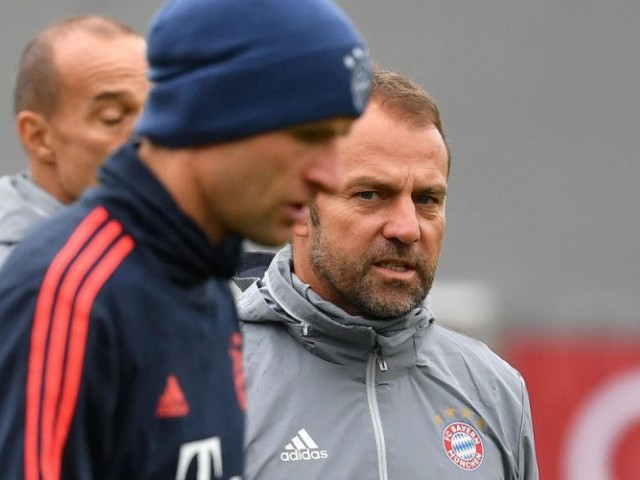 SERIOUS PROBLEMS: Long-term injuries to defenders Niklas Suele and Lucas Hernandez present a major problem for Flick with Bayern leaking goals all season and facing one of the league's most potent attacks. PHOTO: AFP

LONDON: Bayern Munich interim coach Hansi Flick has his work cut out for him as he seeks to plug the champions’ leaky defence and inspire some confidence ahead of Saturday’s Bundesliga clash with visitors Borussia Dortmund.

Assistant coach Flick was put in temporary charge after Niko Kovac was sacked in the wake of Bayern’s humiliating 5-1 drubbing at Eintracht Frankfurt.

Long-term injuries to defenders Niklas Suele and Lucas Hernandez present a major problem for Flick with Bayern leaking goals all season and facing one of the league’s most potent attacks.

Bayern have conceded 16 goals in 10 league games, the same as strugglers Fortuna Duesseldorf and more than 14th-placed Union Berlin.

“We will undertake one or two changes,” Flick said after his first training session this week. “The way we have been conceding goals is not very Bayern-like. It is important for the team to be active. We have to defend from the front and try to get the ball back as quickly as possible. Those are the points we want to address.”

Bayern took a step forward on Wednesday, beating Olympiakos in the Champions League 2-0 for their first clean sheet in all competitions since September 21. But it is not just the defence that Flick, a former Germany assistant coach, must address.

Confidence is a major issue for a side who find themselves in an unfamiliar position after dominating the league for years.

Bayern have won the last seven consecutive league titles, the best run in the history of the Bundesliga, but they have not been firing on all cylinders this season.

High-profile signing Philippe Coutinho has been disappointing so far, while the club has depended almost exclusively on Robert Lewandowski’s scoring ability with the Pole having netted 14 times in 10 games so far.

Dortmund will be going into the game brimming with confidence after their win over the previously unbeaten VfL Wolfsburg in the Bundesliga last week and their comeback victory over Inter Milan in the Champions League on Tuesday.

Dortmund, in second place on 19 points, one ahead of Bayern, were trailing 2-0 at halftime against the Italians before scoring three times to clinch victory. Leaders Gladbach host Werder Bremen on Sunday.

ATP Finals: Djokovic has world no 1 Nadal in his sights