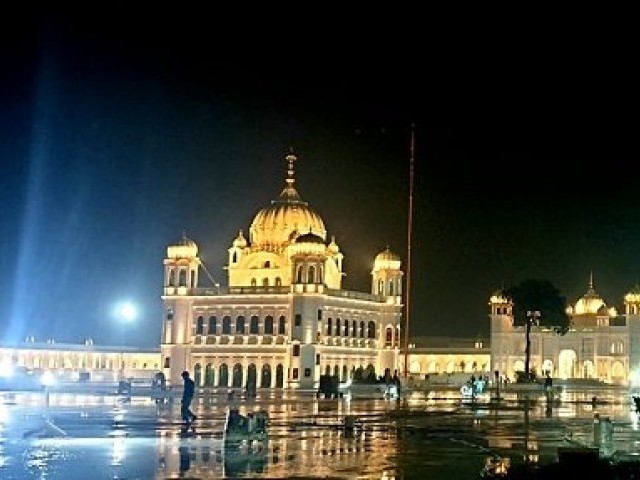 Ahead of the landmark event, Pakistan on Wednesday invited heads of diplomatic missions and representatives at the foreign office to brief them about the Kartarpur Corridor initiative.

The briefing was given by Foreign Secretary Sohail Mahmood, who said Pakistan has built the corridor to meet the longstanding demand of ‘Nanank Naamlevas’ especially the Sikh community.

The corridor will connect Dera Baba Nanak in India with Kartarpur Sahib, located just over 4 kilometers from the international border in Pakistan’s Narowal district.

Kartarpur Sahib is the most sacred place for Sikhs since the founder of Sikh religion Baba Guru Nanak spent his last 18 years of life there.

The shrine houses the Samadhi, where he was cremated, and a grave. The shrine is visible from the border and often Sikhs gather on the Indian side to perform Darshan or scared viewing of the site.

With opening of the corridor, Sikh and other pilgrims can now walk across the border and pay their respects at the Kartarpur shrine without any visa.

As a gesture of goodwill, Prime Minister Imran Khan waived the condition of passports for Sikhs and $20 service charges from the visitors on the first two days of the corridor opening. PM Imran will open the corridor on the occasion of 550th birth anniversary of Baba Guru Nanak

While highlighting the historic initiative, the foreign secretary said Pakistan has taken this step to meet the longstanding request of Nanak Naamlevas and especially the Sikh community across the world, particularly from India.

“Opening of the corridor is in line with the Islamic principles, Pakistan’s policy of promoting inter-faith harmony, and Quaid-e-Azam’s vision of a peaceful neighbourhood,” the foreign office statement quoted the foreign secretary as saying.

The foreign secretary informed diplomats that Pakistan would permit 5,000 Indian pilgrims of all faiths without a visa, per day, seven days a week, throughout the year, with the provision for additional numbers on special occasions, subject to capacity.

He added that, as a part of a series of activities to celebrate the 550thbirth anniversary of Baba Guru Nanak, the Government of Pakistan is issuing a special coin and a commemorative stamp. Moreover, the prime minister has laid the foundation stone of Baba Guru Nanak University at Nankana Sahib.

The foreign secretary said besides the Kartarpur Sahib Corridor, pilgrims from India would be coming through Wagah border as well. Similarly, thousands of pilgrims from across the world, especially from countries with large Sikh community, are coming to Pakistan.

The foreign secretary underlined that the first phase of the construction of the Kartarpur Sahib Corridor project and renovation of Gurdwara Darbar Sahib Kartarpur, which has now become the world’s largest Sikh Gurdwara, has been completed in record time.

While appreciating the interest of the diplomatic corps to attend the inauguration ceremony on 9 November 2019, he also informed them about the arrangements made for their facilitation.

The members of the diplomatic corps in Islamabad had also attended the ground-breaking ceremony of the Kartarpur corridor on November 28, 2018.

Appreciating Pakistan’s historic initiative to open the corridor and completion of the huge project in record time, the diplomats congratulated Pakistan and thanked for the arrangements being made for their facilitation.

The Kartarpur initiative is also seen as significant given the fact that the project went ahead despite worsening ties between the two countries over the disputed Jammu and Kashmir region.

Pakistan completed the project in record 11 months, forcing the Indian government to reciprocate since authorities there could not afford to antagonise the Sikh community.

Posters of Prime Minister Imran Khan along with his longtime friend and former cricketer Navjaot Singh Sidhu appeared in Amritsar, thanking him for the Kartarpur project.

Some Indian reports, quoting unnamed government officials, have tried to undermine the Pakistani initiative by casting aspersions that Islamabad is trying to revive Khalistan movement through the corridor.

Pakistan, however, strongly dismissed the assertions and made it clear that its initiative is not only meant to facilitate Nanak’s followers but also to promote inter-faith harmony.