Manufa­cturer­s unable to pay taxes due to delay in refund­s, which will aggrav­ate revenu­e collec­tion
By Salman Siddiqui
Published: November 6, 2019
Tweet Email 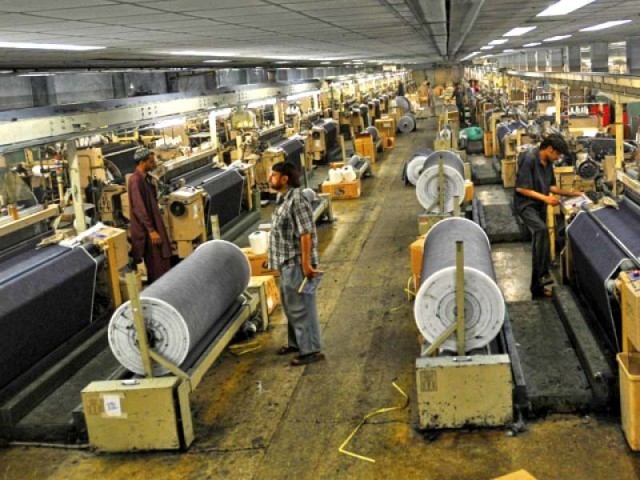 The prime minister has tasked the ministries of commerce and textiles with a new vision of doubling the textile exports from $13 billion to $25 billion. PHOTO: FILE

KARACHI: The yarn manufacturers have expressed inability to pay taxes due to liquidity crunch, aggravating the tax collection situation for the government, which remains dismal so far.

The International Monetary Fund (IMF) has relaxed the tax collection target by Rs233 billion under its $6 billion loan programme for Pakistan following Islamabad’s failure to pace up tax collection at the required level.

The taxes paid by the textile export sectors are refundable, but such collections for documenting them do impact total collection numbers. The yarn manufacturers have lamented that they are unable to pay wages to employees as they are facing acute liquidity shortage partly due to massive delay in release of tax refunds by the government.

“We may not pay due taxes to the government for the ongoing month (of November) due to liquidity crunch,” All Pakistan Textile Mills Association (Aptma) Chairman Dr Amanullah Kassim Machiyara said at a press conference on Tuesday.

He complained that the new refunds claim procedure has been made so complicated that the industrial players remained unable to file errorless refund claim form (Annexure H). The situation was causing unnecessary delay in release of the due refunds.

The sales tax refund filing procedure has been made so complex that it is impossible for most of the exporters to file the claim in such a way that it fulfils all the requirements prescribed by the Federal Board of Revenue (FBR), which makes the refunds possible, he said.

“For example, toll manufacturing sales tax refund claims cannot be filed because GST (general sales tax) on services is a provincial subject and there is no coordination between provincial revenue authorities and the FBR,” he said. He said the government issued promissory bond in place of cash in refunds in the recent past due to shortage of funds with the government. The bond, however, remained invaluable as they cannot be enchased, nor do banks accept them since they lack government guarantee.

“Alternatively cash payment in lieu of promissory bonds should be made immediately,” he said. The FBR stated some 10 days ago that the bonds issue would be addressed through a supplementary Finance Bill. “Clarification is requested in this regard,” he added.

The prime minister has tasked the ministries of commerce and textiles with a new vision of doubling the textile exports from $13 billion to $25 billion. “We are completely committed to this vision, but to achieve that, the industry needs to be fully facilitated.”

The Aptma chairman again demanded the government to allow them duty-free import of cotton to overcome shortfall and help achieve set export targets, which remain the single largest export sector of the domestic economy.

“We need to import five million bales (of 170 kilogram each) to achieve our set textiles export target during the current fiscal year 2020,” he said.

The high duties and taxes on import of cotton come to the tune of 11% of the import price. The taxes have made the essential import unviable by the yarn manufacturers.

He said there was no other option left, but to import cotton to overcome the short production of commodity in the country. “Import has become a must to manufacture yarn for the fabric and cloth making sectors of the textiles. If the government withdraws the duty and taxes on import then our textile sector may meet the set export target. Otherwise, they may miss the export target by 5-10% for the current fiscal year 2020,” he said.

Besides, there is another 17% general sales tax (GST) on yarn, which is refundable. However, “we demand the government to again declare textiles as zero-rated sector,” he said.

Machiyara said that cotton production has been badly hit due to untimely raining and pest attacks. The Pakistan Cotton Ginners Association (PCGA) has revised down cotton production by a massive 32% to 10.2 million bales (of 170 kilogram each) during the fiscal year started July 1, 2019. Initially, the Federal Committee on Agriculture (FCA) had set the cotton production target at 15 million bales for the year in progress in April 2019.