Afghan peace talks in the wake of presidential vote

Afghan peace talks in the wake of presidential vote

The Afghan govt stands on high politi­cal ground, wherea­s the Taliba­n have lost the edge they had before the electi­on
By Syed Akhtar Ali Shah
Published: November 6, 2019
Tweet Email 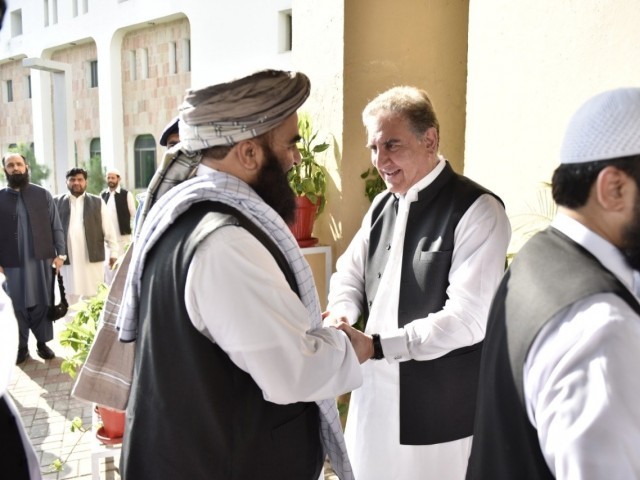 The Afghan peace talks are back on the agenda. The past visits to Islamabad by Taliban representatives and Zalmay Khalilzad were apparently meant for discussing hostage swap, but issues connected with the peace process are believed to have come under discussion too. And the stalemate in the wake of President Trump’s announcement that negotiations were dead has sort of softened in what can be conceived as the breaking of the ice.

The Taliban – in the aftermath of the successful presidential vote – appear to be trying to stage a comeback on the global stage. Their tours to China and Russia are a part of the charm offensive to demonstrate that they were interested in a dialogue to end the longstanding conflict.

Before the elections, the Taliban were inflexible on their demand for withdrawal of foreign troops from Afghanistan without going into a ceasefire. They were also strictly opposed to an intra-Afghan dialogue. On the other hand, the government in Kabul, led by President Ashraf Ghani, and other anti-Taliban groups had a persistent stance that there could be no meaningful outcome of the dialogue process if Kabul and other representative segments of the Afghan society were not included in the talks. They were also calling for ceasefire. The Taliban were, however, adamant that they would cease fire believing that it would weaken their position at the negotiation table. Soon, President Trump’s announcement that the talks were dead and successful holding of the presidential election despite the mounting attacks turned the tables on the Taliban.

Soon after the presidential elections, Kabul used the floor of the General Assembly and called upon the Taliban to join the government for bringing peace. China too renewed initiative for talks and invited Taliban to participate in a two-day intra-Afghan conference in Beijing after their negotiations with the US came to an abrupt end last month. In what came as confirming the Chinese initiative, Taliban spokesperson Suhail Shaheen said they were invited “to participate in the intra-Afghan dialogue” in China on October 29 and 30. The talks appear to be separate from the talks between the US and the Taliban that span over a year and aim at hammering out a deal to force the US troops out of Afghanistan in return for security guarantees. According to Shaheen, all participants were to attend the meeting in China in their personal capacities to share their personal opinions for solving the Afghan issue.

There was, however, no official response from President Ashraf Ghani.

In the meanwhile, US Defense Secretary Mark Esper also dashed to Afghanistan to assess the situation on ground and how to bring the US out of the predicament resulting from the stalled peace talks. Persistent attacks by armed groups have complicated the Trump administration’s pledge to withdraw more than 5,000 American troops from Afghanistan. With reference to the current situation, Esper mentioned that the US could reduce its forces in Afghanistan to 8,600 without hurting the counterterrorism fight against al Qaeda and ISIS, but any withdrawal would be subject to a peace agreement with the Taliban. Presently, the US has about 14,000 American troops in Afghanistan as part of the US-led coalition. US forces are training and advising Afghan forces and conducting counterterrorism operations.

Commenting on peace agreement, Esper also declared that the tentative agreement was dead. “The aim is to still get a peace agreement at some point, that’s the best way forward.” He could not give a timeframe and linked any troops’ withdrawal to a new peace accord. Simultaneously, the European Union has also stressed the need for a ceasefire. An EE representative says that “the idea is really to see how we can move the ceasefire idea forward instead of leaving it for later… There is an opportunity here today.”

Khalilzad has once again spearheaded the parleys amid reports of the Kabul’s stance having hardened. He met Pakistan’s Prime Minister Imran Khan and Army Chief Qamar Javed Bajwa recently in Islamabad, with the discussions focusing on the current status of the Afghan peace process and the need to reduce violence. He underscored the economic and security benefits that peace can bring to the region

In a departure from the past, the Afghan government has come up with a new set of conditions for talks with the Taliban. Afghan President’s security adviser Hamdullah Mohib in a recent statement said that Kabul wanted Pakistan not to incite the conflict in Afghanistan and aid the Taliban. In other words, he blamed Pakistan for the troubles inside Afghanistan. He also insisted on a one-month ceasefire as a precondition for talks with the Taliban. Khalilzad arrived in Pakistan from Afghanistan, where he met leaders including President Ghani who has clearly rejected any talks that would not be led by his government.

The inference from the new developments is that the successful elections in Afghanistan have completely altered the situation in favour of Ashraf Ghani and others not siding with the Taliban. With the presidential vote legitimising its mandate, the Afghan government stands on a high political and moral ground, whereas the Taliban have lost the edge they had before the election. The Taliban now appear to be desperate for the talks to resume so as to remain relevant for the world. But now they will have to show some flexibility, like by agreeing to join the mainstream politics while putting their guns aside.

In this whole background, a convergence of interests of the US, China and Russia also appears to have developed. The three sides are likely to give space to each on the pattern of Yalta – for reaping economic benefits rather than geographical domination. A quid pro quo is brewing up.