KARACHI: The Awami Workers Party’s website, temporarily blocked in the lead-up to the 2018 general elections, was restored after the party lodged objections with the Election Commission of Pakistan and the Islamabad High Court.

Among other practices, it is such ad hoc content restrictions that have resulted in Pakistan being among countries “where governments are increasingly using social media to manipulate elections and monitor their citizens”, a human rights watchdog said Tuesday.

According to the Freedom on the Net 2019 report, which assessed 65 countries that account for 87 per cent of internet users worldwide, global internet freedom declined for the ninth consecutive year as “populist leaders and their armies of online supporters seek to distort politics at home”. Of the countries surveyed, only 15 were classified as “free”, 29 “partly free” and 21 “not free”.

The annual report on online freedom, focusing on developments that occurred between June 2018 and May 2019, found that domestic election interference marred the online landscape in 26 of the 30 countries studied that held elections over the past year.

While disinformation was the most commonly used tactic, authorities in countries blocked websites or cut off access to the internet “in a desperate bid to cling to power”.

The report said that governments were indiscriminately monitoring citizens’ online behaviour “to identify perceived threats – and in some cases to silence opposition.” It found evidence of advanced social media surveillance programs in at least 40 of the 65 countries analysed. 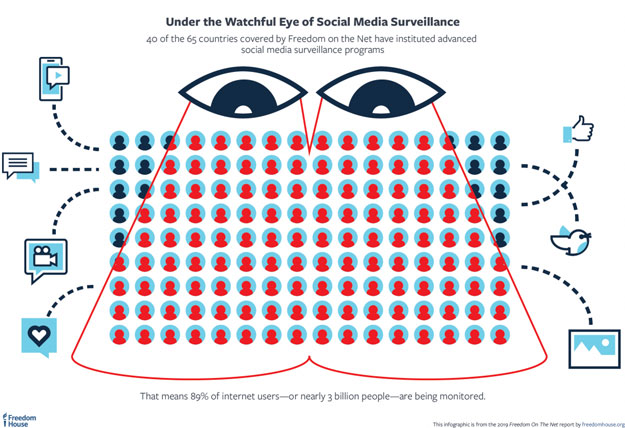 Pakistan’s score was 26 on a scale of 100, which classified it to be among the states where internet is “not free” for its score on Obstacles to Access (limited penetration because of underdeveloped infrastructure), Limits on Content (online content is restricted by the Prevention of Electronic Crimes Act, which authorises the Pakistan Telecommunication Authority to undertake content management) and Violation of User Rights (intimidation, blackmail, and at times violence, in response to online activity). 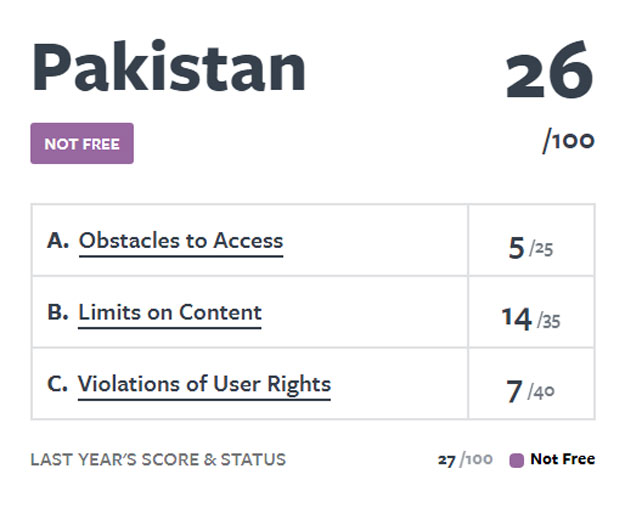 According to Freedom House, authorities in Pakistan, a country with 67 million broadband connections, increased blocking of political, social, and cultural websites. Over 800,000 such websites remain blocked.

Pakistan is also among the top countries where content is restricted on social media, the researchers said.

During the same time period, authorities reported 2,349 profiles to Twitter and requested that the platform remove 193 pieces of content.

The government also sent 214 requests to Google to remove 3,125 pieces of content between July and December 2018, up from 196 requests from the previous six months.

“The PTA…routinely restricts content in a non-transparent and arbitrary fashion. While PECA legally mandates that the PTA issue notices when restricting content, in practice the agency rarely does,” the report said. “This lack of written notices impedes the ability of those impacted to appeal the orders or undertake judicial review.”

Internet bots supporting various political parties surfaced ahead of polls. According to a study it cited, 52 per cent of accounts using #PMLN, associated with the country’s main opposition party, were bots, while 46 per cent using #PTI, the party that is currently in power, were bots.

In April 2019, Facebook said it had discovered inauthentic behaviour on its platform, removing a number of pages, groups, and accounts that had posted content on or operated pro-military pages, those related to Kashmir, and more general informational and community pages.

The group cited a report from the Oxford Internet Institute, released in September 2019, which identified Pakistan as having “coordinated cyber troop teams with full-time staff members employed to manipulate the information space”.

The report identified that such teams work to support preferred messaging of their clients, attack the opposition, and suppress critical content. “Pakistan is alleged to have fake accounts run by both bots and human accounts, and most often manipulates content on Facebook, Instagram, and Twitter,” Freedom House said.

Meanwhile, the report said, authorities upped their efforts to silence critical journalists and activists using a range of techniques. An example given was the interior ministry ordering an investigation into “targeted social media campaign” against Saudi Arabia when Crown Prince Mohammad bin Salman was visiting Pakistan earlier this year.

Commenting on the report, Usama Khilji, a digital rights activist, said it was not surprising that Pakistan’s ranking went down.

“In the last year we have seen the pressures on freedom of expression and privacy increase from state-led efforts to trample on speech and increase surveillance, especially with the setting up of the web monitoring system, and blocking of political content on the internet,” he told The Express Tribune.

However, he added, there have been some welcome developments, such as an effort on part of parliamentary committees to amend the draconian PECA 2016, and some court decisions that call on the government to not block political content on the internet and follow stipulated legal processes in regulating online content.

“It now all depends on the intent of the state to protect fundamental constitutional rights guaranteed under Article 14 as the right to privacy, under Article 19 right to freedom of speech and press, and under 19-A right to information,” the director at BoloBhi said, when asked if Pakistan’s standing could improve. “However, that does not seem likely, as those in control currently benefit from silencing democratic forces.”

China remained the world’s worst abuser of internet freedom for the fourth consecutive year as the government stepped up information controls amid protests in Hong Kong and ahead of the 30th anniversary of the Tiananmen Square massacre, the report said.

The biggest declines were in Sudan and Kazakhstan, followed by Brazil, Bangladesh, and Zimbabwe. Improvements were measured in 16 countries, with Ethiopia recording the largest gains.