Canton­ment Board, distri­ct admini­strati­on pass the buck on to each other
By Imran Asghar
Published: November 5, 2019
Tweet Email 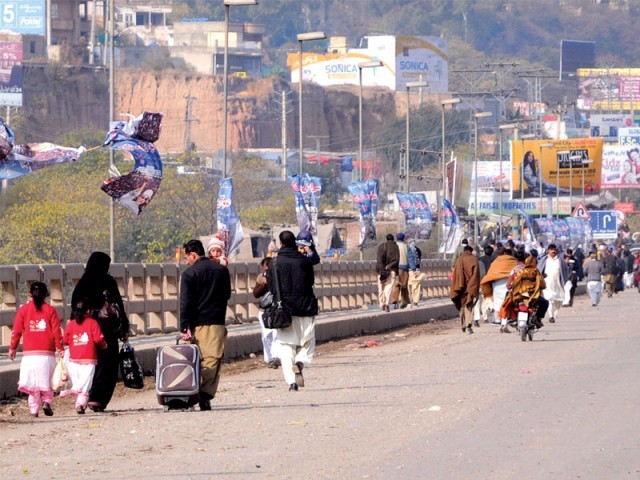 Motorcyclists find a unique way to get passed a barricade at Soan bridge, while commuters were forced to walk beyond this point. PHOTO: WASEEM NAZIR/EXPRESS

RAWALPINDI: The dilapidated state of the Soan bridge and the failure of the city’s administrators to repair the recently-collapsed section of the bridge is compounding problems faced by passengers and transporters. City administrators, though, are only too keen to pass the buck onto each other.

The bridge, which links the Soan Bus Terminal with the Grand Trunk (GT) Road, had been built a long time ago. Owing to the negligence of the authorities and lack of maintenance, the structure of the bridge had deteriorated over time. A section of the Soan bridge had collapsed during the last spell of monsoon rains. Subsequently, the district administration had cordoned off the collapsed section of the bridge by placing metal sheets.

The remaining section of the bridge is so narrow that vehicles can only cross over one at a time and the motorist coming from the opposite direction has to await their turn. This also causes the problem of traffic congestion on the bridge and adjoining roads.

Transporters from the nearby bus stand say that the failure of the district administration to move quickly to resolve this dangerous situation shows not only the administration’s lethargy but also its inability to do things such as repair a road in the city.

They added that when they raised the matter with the Chaklala Cantonment Board (CCB), officials of the board washed their hands off it by claiming that the bridge did not fall within their jurisdiction and that it was the district administration’s job to fix it.

However, the district administration claimed that it was the opposite and that the bridge lay within the cantonment board, hence it was the job of the board to fix it.

Motorists, however, demanded that the provincial government and Punjab Chief Minister Usman Buzdar take notice of the issue and ensure that the bridge is repaired at the earliest.

Despite repeated efforts, The Express Tribune could not contact Rawalpindi Deputy Commissioner (DC) Saifullah Dogar for a comment.