Merced­es driver added he felt this season had been his hardes­t year to date in fighti­ng to win the champi­onship­
By AFP
Published: November 4, 2019
Tweet Email 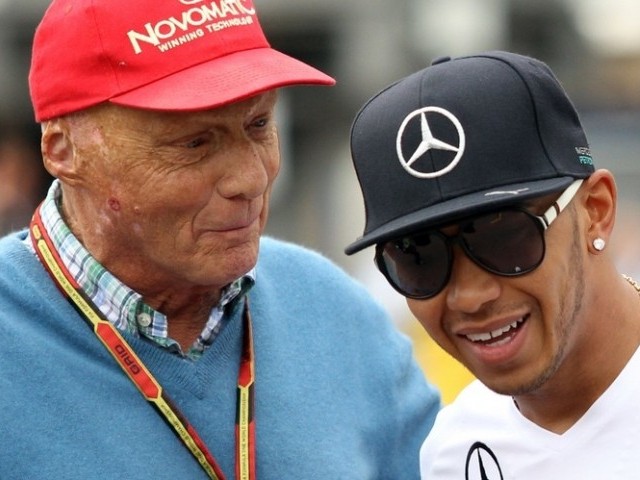 Mercedes driver added he felt this season had been his hardest year to date in fighting to win the championship. PHOTO: AFP

AUSTIN: Lewis Hamilton paid tribute to the late Niki Lauda after wrapping up his sixth world title on Sunday, claiming the Mercedes team mentor was with him “in spirit”.

Triple world champion Lauda passed away in May at the age of 70 and the Austrian legend was very much in the mind of 34-Hamilton after he secured the 2019 title.

“I miss him so much and I know he would take his cap off here today,” said Hamilton. “I am sure he is here in spirit.”

Hamilton added he felt this season had been his hardest year to date in fighting to win the championship.

“Behind the scenes, we have worked so hard and it is so challenging to us all,” he said after finishing second at the United States Grand Prix to teammate Valtteri Bottas.

“And every message of support is important from everyone, so much that people don’t believe. That is why I try to put out messages that are positive. We all struggle and if it helps just one person then it is worth it.”

Earlier, he admitted: “It’s overwhelming if I’m honest. It was a tough race today and yesterday was a difficult day for us.

“I didn’t know if it would be possible, but I worked as hard as I could here and with my team back at the factory.”

Speaking in the dramatic aftermath of the race, Hamilton expressed his feelings quietly and paid tribute to his father Anthony and family.

“Right now, honestly, it is hard to understand what I have done today, but I feel very happy,” he said. “It is just pure, pure happiness. I am happier than ever, but this has been harder than ever.

“Just now, I saw my parents, my family, as I came in and I saw my dad’s smile and that means it all to me. From day one, he has been there all the way. Cloud Nine doesn’t get close to this.”

He added: “My mum, my dad, step-mum and step-dad, and all my family are here and it’s an honour to be here (with six titles) with those greats,” said Hamilton who is one title ahead of Juan Manuel Fangio and just one behind the all-time record of seven held by Michael Schumacher.

“My dad told me, when I was like six or seven, never to give up and that’s kind of the family motto.”

Asked how many more titles he can win, he said: “I don’t know about championships, but as an athlete I feel as fresh as I can be and these next races we will keep pushing.”

Hamilton in no hurry to win title in Mexico

Anthony Hamilton, who worked at three jobs to pay for his son’s karting career in their early days, said his son had matured impressively, but without losing the approach they had cultivated in their time together.

He revealed also that they had repaired their relationship and put behind them the anguish of 2010 after Lewis had dismissed his father as his manager.

“He’s pulled together a really good team of friends over the last few years and all the major players of the family are here today,” said Hamilton senior.

“We’ve had loads of family dinners and barbecues this year.”

He added Lewis had not changed his approach since they started out karting together.

“At eight, when we had no money, we said ‘if you’re going to do this, you are going to do it properly’ and his mentality hasn’t changed since.

“I keep saying to Lewis, you are 34 years young, not 34-years-old, and as long as you feel fit you can keep going for as long as you want and you can.

“This championship means the world to him, but I think it also feels like they are all the same. This feels like it did in 2007, the first opportunity he had to win.”