Djokovic ready for 'big task' to grab 'fantastic' year-end No. 1

Djokovic ready for 'big task' to grab 'fantastic' year-end No. 1

Serbia­n sealed his fifth Paris Master­s title but will be usurpe­d by injure­d Rafael Nadal at the top of the rankin­gs
By AFP
Published: November 4, 2019
Tweet Email 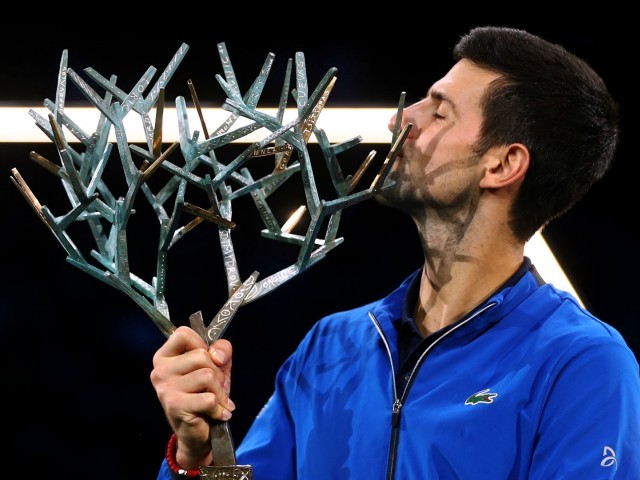 Serbian sealed his fifth Paris Masters title but will be usurped by injured Rafael Nadal at the top of the rankings. PHOTO: AFP

PARIS: Novak Djokovic says he is ready for the “big task” of trying to win the ATP Tour Finals in London and claim the year-end world number one spot for a record-equalling sixth time.

The 16-time Grand Slam champion sealed his fifth Paris Masters title on Sunday with a 6-3, 6-4 victory over Canadian Denis Shapovalov, but will be usurped by the injured Rafael Nadal at the top of the rankings on Monday.

Nadal said he will fight until it is “impossible” to be fit for the start of the season-ending championships on November 10.

If the Spaniard does not play or fails to win a round-robin match at the Finals, Djokovic must claim two group-stage victories and make the final to pass him.

Djokovic would also be sure of the year-end top ranking should he win the tournament and Nadal does not reach the semis.

“There’s always a chance that I win all my matches in London, that I play well. I have done it in the past, and I like playing there,” said the 32-year-old, who has won five ATP Finals titles.

“But it’s (an) extremely difficult task considering who my opponents are going to be.

“You’re playing (a) top-10 player every single match. So that’s a big task on my end that I have to focus on.

“And as a consequence, of course, if I manage to get the year-end number one, that would be fantastic.”

Djokovic is bidding to equal Pete Sampras’ record of finishing six years as the world’s best player, while Nadal is looking to achieve the feat for the fifth time.

“It is a motivation and a goal every day,” said Djokovic. “It is a goal that I have as a professional tennis player to win as many Grand Slams as possible and also to be number one worldwide for as long as possible.”

The 33-year-old Nadal could have ended the race for top spot by winning the Paris title, but he withdrew before his semi-final against Shapovalov with an abdominal muscle strain.

Djokovic has enjoyed yet another fantastic season, winning the Australian Open and Wimbledon among his five titles.

That looked a long way off when his comeback from a long-standing elbow injury suffered a setback last year with a shock French Open quarter-final defeat by Italian Marco Cecchinato.

Nadal eases past Wawrinka as Djokovic sets up Tsitsipas clash

But he has since added four major titles, having also claimed the 2018 Wimbledon and US Open crowns.

Djokovic — who is closing in on Nadal, who has 19, and Federer, with 20, on the all-time list of Grand Slam titles — says he is hoping to play on for as many years as possible.

“I would like to play tennis for a long time. I don’t know how long that is going to be, but I wish to really play pretty long.

“So hopefully you’ll be seeing me around for many more years.”

Djokovic’s victory on Sunday delivered his 34th Masters title and his 77th on the ATP Tour in total.