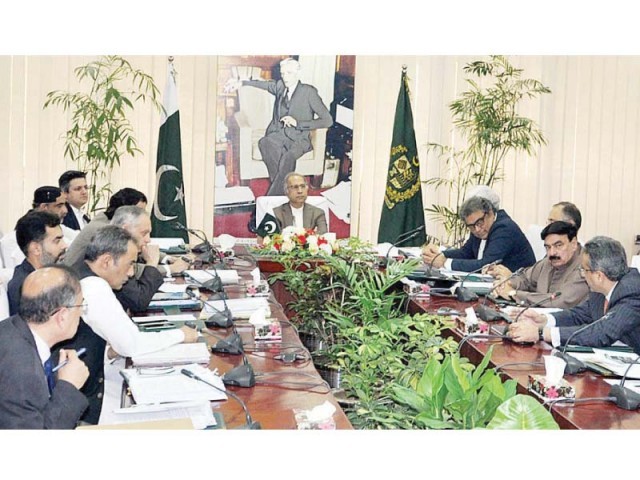 The ECC approved the setting up of two committees for resolving the issue of payment of different outstanding amounts by Wapda and PSO to the Port Qasim Authority. PHOTO: APP

ISLAMABAD: The government on Wednesday approved a temporary reduction in electricity tariffs by almost half for a small segment of domestic and commercial consumers on their incremental consumption during winter and also allowed the release of wheat stocks to provinces to meet their needs.

The Economic Coordination Committee (ECC) of the cabinet gave the go-ahead for release of 650,000 tons of wheat from Passco stocks to the provincial governments of K-P, Sindh and Balochistan to maintain the demand and supply equilibrium in the local market, according to a statement issued by the Ministry of Finance.

The cabinet body once again expressed concern over rising prices of wheat and wheat flour and shortage of the commodity. Some committee members set off alarm bells by pointing to the falling wheat stocks and suggested that the government should make arrangements for its import. The ECC took up the wheat situation, particularly the rising trend in wheat prices, said the finance ministry. It approved release of 300,000 tons each to the governments of K-P and Sindh and 50,000 tons to the government of Balochistan, it added.

The ECC also approved Rs2.745 billion for payment as Passco incidental charges at a ratio of 50:50 to be equally shared by the federal and respective provincial governments.

The latest wheat release followed an earlier release of 250,000 tons to Sindh and K-P from Passco stocks.

The ECC was informed that Passco and provincial food departments had reported that they had stocks of 6.4 million tons compared to 10.1 million tons at the same time last year, showing a reduction of over 36%. Few members of the ECC voiced concern that mismanagement of wheat procurement might result in a probe by the National Accountability Bureau (NAB).

The finance ministry said despite the fact that total availability of wheat was estimated at 28.3 million tons, including the leftover stock of 3.8 million tons compared to the national requirement of 26.9 million tons, the prices of wheat and flour were going upwards in the domestic market.

The ECC approved the fixing of a uniform electricity tariff at Rs11.9 per unit for a 24-hour period for the consumers currently paying peak and off-peak rates. It approved a relief of Rs10.09 per unit on additional consumption as compared to the consumption during the November-February 2018-19 period.

The ECC was informed that the proposal was aimed at utilising the massive surplus electricity during winter months when the demand plunged to 8,000-9,000 megawatts from the installed capacity of 35,000MW.

The Ministry of Energy said the proposal was based on similar models adopted in various countries including Chile and it was expected to lead to utilisation of additional electricity to the tune of Rs24 billion in four months.

The ECC approved the setting up of two committees for resolving the issue of payment of different outstanding amounts by the Water and Power Development Authority (Wapda) and Pakistan State Oil to the Port Qasim Authority (PQA).

The ECC was told that Wapda owed Rs1.1 billion to Karachi Port Trust (KPT) after 52 consignments imported by Wapda were cleared by the KPT board on Wapda’s request for deferred payment and following approval of the federal government.

Wapda had only paid Rs334 million as against Rs1.41 billion while the remaining Rs1.1 billion was still pending.

The other payment was related to the Petroleum Division, which owed Rs1.7 billion to the PQA in wharfage charges on the LNG imported by Pakistan State Oil. The Ministry of Maritime Affairs requested the ECC to direct Wapda and the Petroleum Division to make their respective payments to the PQA. The ECC discussed the issue and in light of the input formed a committee, headed by Minister for Economic Affairs Hammad Azhar, for suggesting a solution within two weeks.

The ECC also discussed the supply of gas to Habibullah Coastal Power Company (HCPC) and approved a proposal of the Petroleum Division for supply of indigenous gas for an interim period of three to six months, purely on ‘as and when available basis’ with no liquidated damages.

During the period, the supply of RLNG could be evaluated together with commercial terms, if the Central Power Purchasing Agency (CPPA) agreed to switch the plant to RLNG and extend the power purchase agreement accordingly.

Earlier, the Ministry of Energy told the ECC that the issue of gas and RLNG supply had been deliberated at length with the stakeholders and accordingly the Petroleum Division was of the view that no long-term firm commitment of indigenous gas supply to HCPC could be offered in view of the depletion of domestic reserves and the widening gap between demand and supply.

However, considering the location of plant in Quetta and voltage issues, the abrupt suspension of gas supply upon expiry of gas sale agreement might not allow the CPPA to make alternative arrangement to stabilise the grid, which was neither in the interest of Balochistan nor the country.

On yet another proposal by the Ministry of Energy, the ECC extended the timeline by another one and a half year for the commencement of competitive market operations/commercial operation date of the Competitive Trading Bilateral Contracts Market (CTBCM) to allow completion of CTBCM plan within 18 months after approval of CTBCM plan by Nepra.