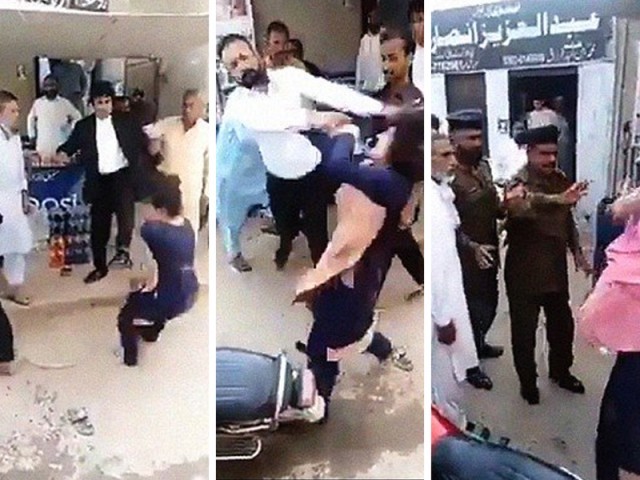 Lawyers beat up a woman outside a local court in Narowal. SCREENGRAB: YOUTUBE/VIRAL & LEAK'S

Footage of lawyers thrashing a woman outside a local court in Narowal’s Shakargarh area went viral on Wednesday.

The victim, who has been identified as Amrat, was at the court for a hearing pertaining to a door in the street near her residence.

She claims that the the lawyers stopped her from entering the chamber.

They then proceeded to drag her outside the court and beat her up as can be seen in the video.

They kick and push her while bystanders, including policemen, look on.

Lawyers thrash wardens for stopping them over violation in Lahore

The local bar association’s president, Naeem Iqbal, said that the woman was accompanied by some men.

Iqbal also claimed that the woman attempted to kidnap Yasir Khan, one of the lawyers.

A case has been registered against the alleged culprits.

Punjab Chief Minister Usman Buzdar has also taken notice of the incident and given directives to the Narowal district police officer to submit a report.

This is not the first time the custodians of the judicial system have been caught on camera taking the law into their own hands.

Earlier this year, a group of black coats thrashed a warden and an assistant warden for trying to issue them a challan over the violation of traffic rules.

The traffic wardens had stopped lawyers who were riding a vehicle on Jail Road over the violation that the person in the driving seat was using a cellphone and not wearing a seat belt.

The warden had tried to issue a challan over the violations. However, the lawyers resisted and this led to a heated exchange between the two parties.