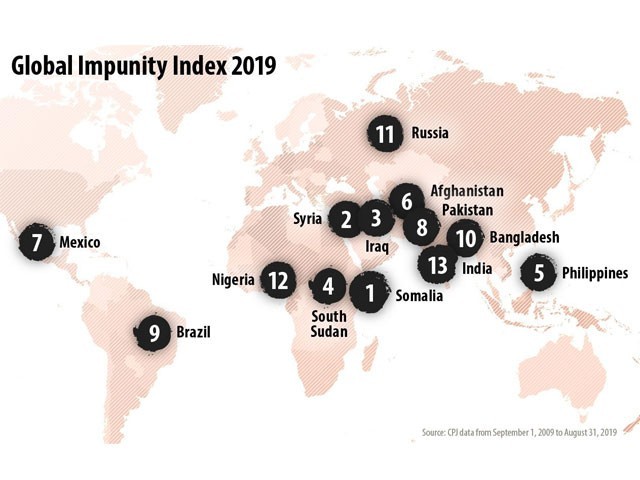 KARACHI: During one of his recent trips to the United States, Prime Minister Imran Khan said Pakistan’s media was freer than in Britain. US President Donald Trump, too, around the same time, expressed envy, saying that Pakistan’s premier was fortunate to have such a positive press.

One of the reasons for this “freer” press is believed to be the emphasis placed by the government and the state apparatus on “positive reporting”. But another, more sinister, reason is that journalists are well aware of the consequences of not parroting the state narrative.

Pakistan, which ranks 142 on the World Press Freedom index, is among the 13 countries where journalists are murdered and their killers go free due to “unchecked corruption, ineffective institutions, and lack of political will to pursue robust investigations,” the Committee to Protect Journalists (CPJ) has found.

The 2019 Global Impunity Index examined journalists’ murders that were carried out with complete impunity between September 1, 2009 and August 31, 2019. At least 16 such cases were found in Pakistan, and the country has regularly featured on the index since its inception twelve years ago.

Of the murdered Pakistani journalists mentioned in the CPJ database, seven belonged to TV channels, seven were associated with print and online editions whereas one of them was a freelancer.

As for their provincial affiliation, seven of them were killed in Balochistan as compared to five in Khyber-Pakhtunkhwa, and two each in Sindh and Punjab.

This is because, senior journalist Hamid Mir said, in most cases, some powerful people were involved and the state failed to pursue them.

“We followed the kidnapping and murder of Hayatullah Khan [his body was found in 2006 from K-P] … a commission was formed and his wife recorded her statement… but then she was killed. His younger brother, who followed up the case, was also slain. Hence, I requested his only surviving brother to escape with his family,” he told The Express Tribune.

The anchorperson said he advised and suggested multiple governments on ensuring protection to journalists, including formation of a journalist’s safety council and carry out legislation, but to no avail.

CPJ’s Steven Butler echoed similar sentiments, saying the foremost reason behind the lack of conviction for murder victims was lack of commitment on the part of investigative authorities to solve and prosecute the murderers.

“This is often a result of attitudes at the local government level, but there’s no pressure for resolution from provincial or federal authorities. Sometimes this may be due to suspicions of official involvement in the murders,” Asia coordinator of the New York-based group told The Express Tribune.

“In other cases, Pakistan’s practice of essentially, buying off the victim’s family with ‘blood money’ get in the way of court prosecution and conviction.”

Butler said the CPJ had recommended the appointment of a federal prosecutor to compel investigations.

Asked if the newly-proposed media tribunals, which have been unanimously rejected by the media fraternity, could address the issue, he said, “It seems unlikely… the fear is that these tribunals would put further pressure on journalists to self-censor and have nothing to do with protecting journalists.”

Mir agreed with Butler and said that “it was just an arm-twisting tool, and cannot resolve the concerns regarding safety of journalists”.

The countries, which accounted for 222 of the 318 deaths in the last 10 years, “represent a mix of conflict-ridden regions and more stable countries where criminal groups, politicians, government officials and other powerful actors resort to violence to silence critical and investigative reporting.”

During the 10-year index period of CPJ’s 2019 #ImpunityIndex, 318 journalists were murdered for their work worldwide.

In 86% of these cases, no perpetrators have been successfully convicted. #IDEI #EndImpunity https://t.co/4kiM2FD4gS pic.twitter.com/4rgF6IBEDY

Somalia was the worst country for the fifth year in a row in the ranking based on deaths as a percentage of each country’s population – 25 unsolved killings in a country of 15 million people.

Syria was second and Iraq third on the list; the country with the largest number of unsolved killings was the Philippines with 41, followed by Mexico with 30.

Other countries making up the 13 worst were India, Afghanistan, Brazil, Bangladesh, Russia, Nigeria and South Sudan.