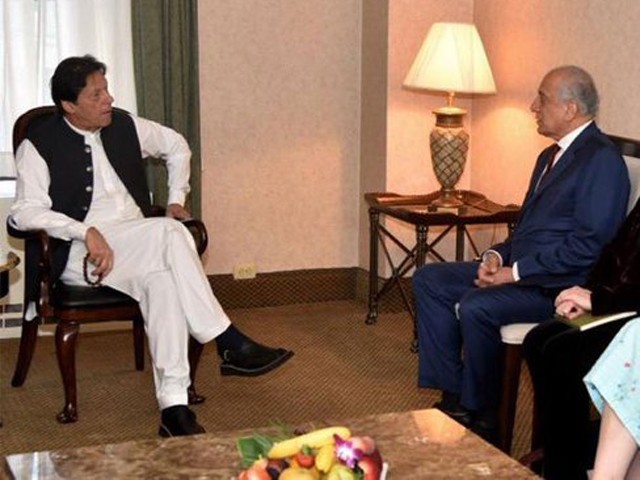 ISLAMABAD: Prime Minister Imran Khan has urged all sides to take practical steps for reducing the violence in Afghanistan, assuring the visiting US diplomat of Pakistan’s all-out support for brokering the Afghan peace deal at the earliest.

The prime minister’s assurance came during meeting with US special envoy Zalmay Khalilzad, who arrived in the capital on an unannounced visit on Monday as part of ongoing efforts to revive the stalled peace talks with Taliban.

The US and the Afghan Taliban were close to striking a deal last month but President Donald Trump pulled out of the peace process, citing insurgent group’s continued attacks against the American forces.

The Taliban’s refusal to agree on a ceasefire has emerged as a major stumbling block in the way of breaking the impasse. Efforts; however, were being made to bring the two sides back to the negotiating table.

Pakistan has been on the forefront of seeking early resumption of the reconciliation process.

Officials said Pakistan and other stakeholders were pushing the Taliban to agree to a ceasefire at least during the intra-Afghan dialogue.

At the recent four-party talks in Moscow, involving Pakistan, Russia, China and the US, there was a consensus that reduction in violence by all sides was crucial for the resumption of the peace process.

He also underlined the need to overcome the difficulties in this regard so that an enduring political solution to the Afghan conflict could be achieved at the earliest.

The prime minister underscored that it was important to guard against the negative narratives and efforts by any quarter to undermine the progress made so far through painstaking efforts.

“As a sincere facilitator and a friend, Pakistan remains ready to do everything possible in its capacity, as part of a shared responsibility, for early conclusion of a peace deal,” the prime minister was quoted as saying.

Achieving sustainable peace and security and ensuring long-term development, progress and prosperity in Afghanistan and the region was in Pakistan’s best national interest, the prime minister said.

This is the second visit of Khalilzad to Pakistan in a month. He visited Islamabad in the first week of October and held a meeting with the Afghan delegation led by Mullah Abdul Ghani Baradar.

Khalilzad’s latest trip to the region that also took him to Kabul and Moscow raised hopes for the resumption of Afghan peace talks.

Pakistan, Russia and China last week urged the US to resume talks with the Taliban as they believed that 18-year Afghan war could only end through negotiations.

Officials here were hopeful that the two sides would soon return to the negotiating table. The US chief negotiator on Sunday held talks with Afghan leaders, including President Ashraf Ghani.

Diplomatic sources said the unannounced visit by Khalilzad was meant to take the Afghan leadership into confidence about the  resumption of talks with Taliban.

Kabul was upset with the earlier negotiations, which nearly produced an agreement.

The Afghan government was skeptical about the success of talks between the US and the Taliban without participation of other Afghan groups.

Taliban, who earlier met other Afghan groups in Moscow and were set to engage in intra-Afghan dialogue in China, refused to talk with the Kabul administration calling it a US puppet.

The group; nevertheless, insisted that they would talk to the Afghan government once the deal was struck with the US regarding the timetable for troops’ withdrawal.