Develo­pments involv­ing Turkey in Syria should be of deep concer­n for Pakist­an
By Shahid Javed Burki
Published: October 28, 2019
Tweet Email 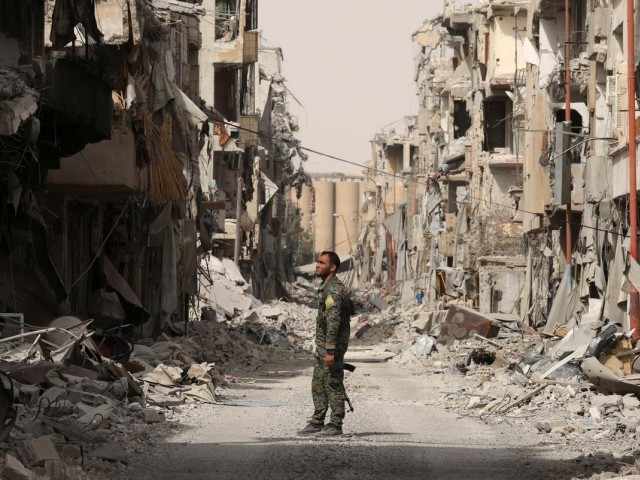 There is a fair amount of physical distance between Pakistan on the one end and Syria, Turkey and the Kurds on the other. What happens to Syria once President Donald Trump has detached his country from that part of the Middle East would have consequences for Pakistan. To begin with, it may lead to thousands of Islamic State (IS) soldiers who, having lost the area the size of Britain they once controlled, became footloose themselves. Some of them are heading towards other unsettled parts of the world — Afghanistan and the Philippines in particular. Trump’s actions may speed up that process. He had promised his followers that if elected as the United States president, he would bring back all the troops that were engaged in the wars in the Middle East that his country should not have started in the first place. Getting to the White House in January he would end them and bring his people back. But he had not quite figured out what would happen to the places that were thoroughly destabilised by the actions taken by his predecessors. He had a special representative talking to the Taliban with the aim of bringing stability to the country that had been in one war or the other for 40 years. If the effort did not succeed, Afghanistan could become another area where groups such as the IS that had lost out in Syria, could find a toehold.

The United States under President Trump has not thought through how it wishes to protect its strategic interests in the Middle East. Washington is the source of a series of crises that have hit the region in the past several years. They reflect the whims of Trump who operates on the basis of what he calls his “gut feeling”. He values what his guts tell him more than the advice that comes from his advisers. One manifestation of this approach to policymaking is the up and down stance followed by the United States in Syria.

Several foreign powers got involved in the conflict in Syria. The United States came in the company of Europe and made no secret of its aim to remove Bashar al Assad from the presidency and bring democracy to the Arab nation. That was the objective of the youths that brought the world the “Arab Spring of 2011”. But unlike the strong men in Egypt, Tunisia, Libya, and Yemen who were felled by the movement, Assad and his regime were able to stay in power even when that meant death for tens of thousands of citizens and displacement from their homes of half of the country’s population. Turkey, one of Syria’s many neighbours, also got involved, aiming to achieve a number of objectives. For Ankara, the most important issue was to prevent the Kurds from carving out a geographic space for themselves on the Turkish border. That would have happened if the United States had pulled out its entire force of 2,000 from Syria.

On February 20 the White House announced it planned to leave 200 American troops in Syria, signaling a partial retreat from the previous position of total withdrawal that had led to the resignation of defence secretary Jim Mattis. In a telephone conversation, the Turkish and American presidents agreed to work together to create a “safe zone”. The American troops would be based in northeast Syria as well as in a small outpost in al Tanf, in the country’s southeast.

It was not clear whether the presence of a residual contingent of 200 troops would save the war-torn country from falling into the hands of the Shia forces that were aligned with Iran. In an interview with the CNN, the Turkish President made it clear that “if there is to be a free zone, then it must be under our control. Because that is my border”. Ankara regarded the Kurdish YPG militia that controls that region and has been a key American ally against the fight against the Islamic State, a terrorist group.

Turkey had repeatedly threatened to intervene militarily against the YPG east of the Euphrates River, where the safe zone was planned. Military action by Ankara could draw in both Iran and the United States, this time on the same side of the conflict.

On October 6, 2019, Trump changed his mind again. Another telephone call from President Erdogan led to an announcement by the American leader that his country was pulling out all troops from Syria’s north. This gave Ankara the opportunity to establish its domain over the area. The Kurds were the main fighting force that had worked with the small American force to defeat the Islamic State there. They provided the boots on the ground while the Americans came in with intelligence and air support. That combination proved to be too much for the forces of the Islamic State Caliphate that lost thousands of its soldiers while thousands more surrendered and were placed in prison-camps guarded by the Kurds. The Turks carried out their announced intentions; when the Americans pulled out, they pulled in.

An analysis by The New York Times was right in detailing the consequences of the American move. There were a number of winners from the game Trump had played, said the newspaper. One important result was that Turkey quickly routed the Kurdish groups Ankara considered as terrorists who were living in an American protectorate. But there were other winners.

“Chief among them is President Vladimir V Putin of Russia, who gains vast influence in a strategic corner of the Middle East where, until 2015, he had almost none. Now he is a player, and already he is filling the territorial and political vacuum that Mr Trump left behind. Iran was also a winner. It has long used Syria as a route to send missiles to Hezbollah and to flex its muscles across the region. That, in many ways, is the most perplexing part of the President’s decision to withdraw, because it runs so counter to his ‘maximum pressure’ campaign against Iran’s clerical leaders and the Islamic Revolutionary Guards Corps.”

The New York Times wrote a strongly-worded editorial that took note of the fact that Congress voted overwhelmingly against President Trump’s move. “Mr. Trump, as he always does, claimed a huge victory — ‘an amazing outcome’ that saved ‘millions of lives.’ That scores of Kurdish lives have already been lost, that thousands of people have fled their homes, that a swarm of Islamic State followers escaped from internment camps, that Kurds themselves turned for help to the mass murderer Bashar al-Assad, that America’s dwindling credibility in the world was undermined, meant nothing to the President. ‘It’s not our border,’ he said.”

Developments involving Turkey in Syria should be of deep concern for Pakistan, especially if it leads to the arrival of extremists in the country’s neighbourhood.