Develo­pment comes in line with a number of other reform­s made in the Hajj and Umrah sector recent­ly
By News Desk
Published: October 21, 2019
Tweet Email 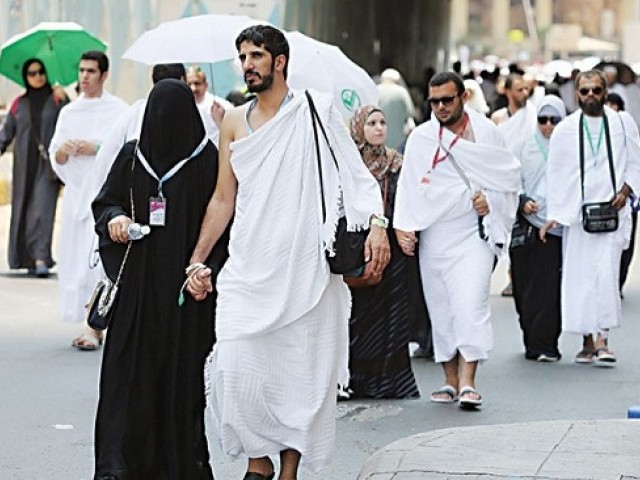 Pilgrims walk on a street in Makkah during the first day of Hajj. PHOTO: AFP/FILE

The Kingdom of Saudi Arabia is mulling possibility of allowing women to perform Hajj without a male guardian.

According to Arab News, the Ministry of Hajj and Umrah is conducting researches to issue visit visas for both tourism and Umrah purposes, and  this process is expected to pave the way for allowing women to come without the need for a mahram (male guardian).

In order to perform pilgrimage, women are currently required to travel with a male guardian or be met by him on arrival in the kingdom, however, women over the age of 45 may travel without a mahram if they are  in an organised tour group.

This development comes in the line with a number of other reforms made in the Hajj and Umrah sector recently.

Moreover, the ministry was urged to intervene in the sector to save business, Arab News learned.

Previously, Umrah firms in the country have raised their concerns about the impact of regulations, saying they are losing out and warning around 200 companies will be leaving the market if authorities do not step in.

Marwan Abbas Shaban, head of the National Committee for Hajj and Umrah, said there were about 750 Umrah and Hajj companies with licences, but only about 500 of these were in the market and they were only running at 1 per cent of their capacity.

Other ministry updates also include giving pilgrims greater flexibility on transport options that can be accessed on a portal called Maqam that allows Muslims around the world to apply for an Umrah package digitally.

Russian accounts targeted US voters on Instagram ahead of 2020 election