Couple's obviou­s chemis­try never fails to wow the audien­ce and the duo did delive­r it. Well, more or less
By Entertainment Desk
Published: October 21, 2019
Tweet Email 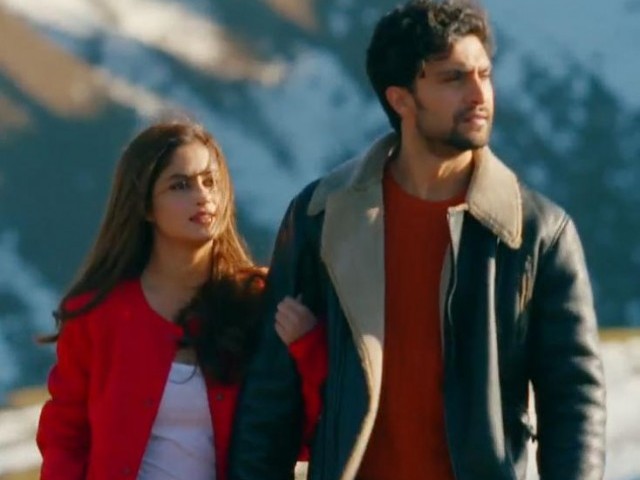 Sajal Aly and Ahad Raza Mir’s fans were in for a treat late Saturday night, when the starlet shared a glimpse of their upcoming drama Ye Dil Mera on social media.

The public was ecstatic and couldn’t wait to see their favourite on and off-screen couple sharing screen space for the third time. Aly and Mir have previously worked together on Yakeen Ka Safar and Aangan.

Their obvious chemistry never fails to wow the audience and that was exactly what was expected in Ye Dil Mera. And the duo did deliver it. Well, more or less.

The show, written by Humsafar and Diyar-e-Dil famed writer Farhat Ishtiaq, is being accused of glorifying and romanticising workplace harassment.

Many have taken to Twitter since Saturday to explain how Ye Dil Mera is disguising workplace and sexual harassment as romance. “I think they did a good job at representing Pakistani culture here. There’s biryani, there’s workplace harassment. What else do you need?” a user wrote.

i think they did a good job at representing pakistani culture here. there's biryani. there's workplace harassment. what else do you need? https://t.co/6WuejcsCGP

“If someone spoke to me like that at a job interview, I’d leave right away. And I can do that because I have the privilege to walk away from a sleazy boss. How many girls would be able to take a stand up like that for themselves? This isn’t romantic. It’s sleazy,” shared another user.

My 45yo boss once told me "aap ne aj tou bara acha colour pehna hua hai". Another, in his late 20s, used to stare at us. Yet another used to flirt, was kinda handsy in a subtle way (media's full of such men). Stop romanticising harassment. This is not cool, not romantic. https://t.co/XtqorfqE0V

Am I the only one who thinks this is harrasment? https://t.co/6ZRczK5Zva

Oh boy. So much going on here. She's dressing up in trousers before the interview but goes dressed as a behn ji with jhumkay and a hairstyle fit for an evening date. Employer is a grade A tharki asking inappropriate questions that she should've walked away from without answering https://t.co/v7fv5EK6NN

First of all who wear jhumkas and long frauks to the interview and secondly which HR representative interviews in such a stupid way? Dramas are meant to be fictitious and are not to meant to be in 'parallel world' we all refer to. https://t.co/X3NzHxDLh2

We all knew the TV writing in this country had declined but not to this point. I’m disappointed Sajal and Ahad – who are so talented – would take on such vapid roles and romanticize sexual harassment in the workplace. https://t.co/EOKNOE65oC

Soon after the backlash, many came forward to defend Ishtiaq, whose female characters are usually strong and independent. The writer herself clarified she would never romanticise rape and harassment.

The onscreen couple sparked dating rumours since the time they first shared screen together in Yakeen Ka Safar. Th very show was penned by the same writer.