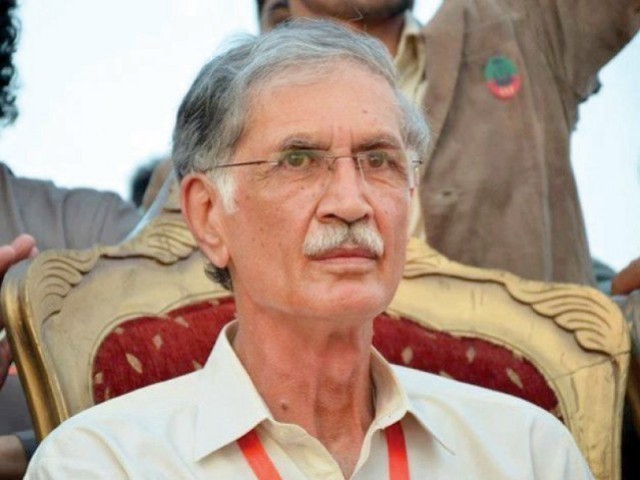 ISLAMABAD/LAHORE: Defence Minister Pervez Khattak, who is tasked with holding talks with leaders of a proposed anti-government march, has said he has started making backdoor contacts with opposition parties and that these contacts will soon yield positive results.

Talking with reference to the JUI-F chief Maulana Fazlur Rehman’s demand for the premier’s resignation during an informal interaction with media, Khattak said it was a ridiculous demand. “We have contacted Maulana through some common friends. We will also make contact with all opposition parties.”

Khattak said in politics doors of negotiations are never closed. “We invite Maulana to tell us his agenda and will deliberate over it. But the demand for resignation of the prime minister is ridiculous,” he added.

Maualana Fazlur Rehman will meet the PML-N President Shehbaz Sharif in Lahore on Friday (today) and later announce final plan of the Azadi march. Both the leaders will hold delegation level talks in which detailed consultations will be held on various proposals with regard to the march.

According to sources in the PML-N, the party will take out a rally in solidarity with the people of occupied Kashmir on October 27 on the Mall road in Lahore ahead of the march to warm up its supporters.

A senior party official said the rally will be staged from Lahore Zoo to Faisal Chowk – a very brief walk given participation of women and children.  “This rally will give the PML-N an opportunity to gear up for the Azadi march.” He said preparations are under way to provide full support to the march.

Another leader said that even former prime minister Nawaz Sharif has asked Fazl to plan another movement early next year after holding a multi-party conference in mid-December to take all opposition parties on board.

“However, the party leaders have also been instructed to extent all-out support to Fazl,” he added. The leader said the PML-N workers would join the JUI-F march from around the country.

“Leaders from Khyber Pakhtunkhwa (K-P) would support the JUI-F in the K-P; leaders from Punjab would extend support in Punjab. All PML-N leaders would join the march and give full support to local JUI-F leadership till the march reaches Islamabad,” he said.

They, however, said the party also expects that Maulana would take into account Nawaz’s suggestion.

Meanwhile, National Party’s Mir Hasil Bizenjo said the opposition would not hold talks with the government, adding that his party has decided to participate in the march with full force.