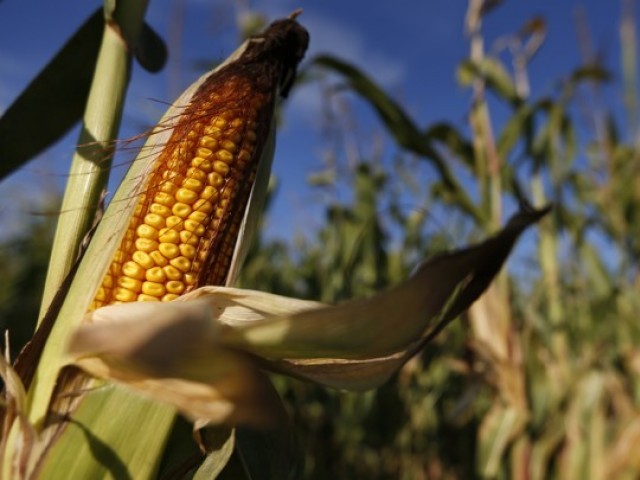 A cob of corn is seen in a field. PHOTO: REUTERS

ISLAMABAD: The National Assembly Standing Committee on National Food Security and Research was informed on Thursday that owing to health and environmental issues, the import of genetically modified (GM) seeds of maize had been banned.

However, the government will provide possible facilities to companies for technology transfer for Bt cotton production.

The meeting, chaired by MNA Rao Muhammad Ajmal Khan, discussed the introduction of GM seeds for food crops in the country.

Speaking on the occasion, the Ministry of National Food Security and Research Secretary Dr Muhammad Hashim Popalzai informed the meeting that Pakistan was a non-genetically modified organism (GMO) country in terms of food grain production and the countries which imported maize from Pakistan was also of the non-GMO category.

He cautioned that the import of GM seeds would adversely impact exports from Pakistan and local buyers would also avoid the purchase of corn produced through these seeds.

Popalzai told the committee that hybrid maize had been cultivated over large areas, adding that it was yielding good results for the farmers. The maize crop had remained bumper for the past many years, he added.

The ministry official remarked that the Bio-Safety Committee had approved the import of GM seeds for tests and trials but imposed a ban on the import of GM maize seeds in 2018. The committee wanted to engage in further deliberations on the health and environmental impact and effects of cross-pollination in other varieties.

The committee was told that three other ministries – health, climate change, and commerce – had also suggested the imposition of ban on the import of GM maize seeds in order to avoid any threat to the local crop and carry out further studies on the safety of these varieties.

The committee chairman called for convening secretaries of other ministries as well for their input on the subject, saying the national interest and farmers would be preferred and their rights must be protected at every cost.

He said all the legislative work would focus on safeguarding the national interest besides protecting the agriculture sector and farmers. He also directed that the Seed Association of Pakistan should be invited for its input and appreciated the role of multinational companies in per-acre crop production.

A representative of the GM seed providing company apprised the meeting that cultivation of such seeds was safe as was the case in conventional seeds, adding that they were cost-effective and reduced the cost of pesticides.