Islamabad March: is history repeating itself?

Islamabad March: is history repeating itself? 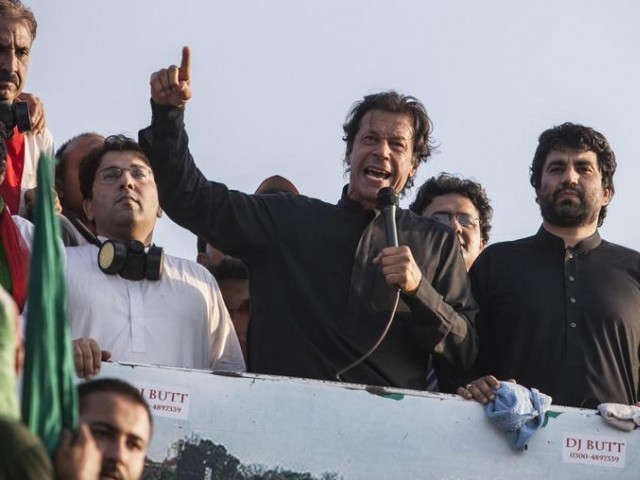 A Reuters file photo of Imran Khan at the PTI dharna in 2014.

History repeats itself — sometimes with a vengeance. When the PML-N government completed its first year in June 2014, PTI Chairman Imran Khan announced a march on Islamabad and a sit-in against “massive rigging” in the 2013 general elections. Now, a year after the PTI came into power, the opposition parties led by JUIF’s Maulana Fazlur Rehman announced a similar march starting from October 27.

The opposition now plans to protest in Islamabad against a “total failure” of the PTI government in controlling price hike and ensuring good governance and the rule of law. It is also protesting against the “dubious” installation of the PTI government, “one-sided” accountability and the government’s “failure” to take a stand against India’s annexation of IOK. The difference between the two protests is that in 2014 the PTI was the opposition with only 34 seats, whereas in 2019 the opposition which is united for a march has more than 140 seats in the National Assembly and a majority in the Senate. In 2013, the PML-N had a two-thirds majority whereas in 2019 the PTI has a fragile majority of a few seats. But in 2014, the establishment was not supportive of the PML-N government whereas now it is perceived to be favourably inclined towards the PTI regime.

Why does the opposition see space to challenge the PTI-led government? In fact, despite the pledges made by the PTI to bring qualitative change in governance by eradicating corruption, nepotism, and other social evils, there is still no betterment in the socio-economic conditions. Stagnant exports, fall in the value of rupee, excessive borrowing from domestic and international financial institutions and double-digit inflation have made things worse. Severe economic hardship over the last year has motivated opposition parties to mobilise popular support against the incumbents.

One can say that history will repeat itself because of two main reasons. First, Imran Khan and Dr Tahirul Qadri of the Pakistan Awami Tehreek (PAT) planned a march on Islamabad from Lahore and a subsequent sit-in. The PTI wanted its grievances over the alleged rigging in the 2013 elections to be addressed and Qadri wanted justice for the killing of his party workers and followers in Model Town, Lahore in June 2014. While Qadri abandoned the sit-in after two months, the PTI continued for 126 days till Imran Khan called it off after the APS massacre on December 16. The PTI considered the sit-in as its legitimate right to raise awareness against corruption and refused to suspend its agitation even when the Chinese President was scheduled to visit Islamabad in October 2014.

This time the roles are reversed as the PTI is now in government and will have to face an embarrassing situation as the PML-N did in 2014. One needs to recall that the 2014 sit-in was not peaceful and the attacks on Parliament and the PTV building took place while Imran Khan encouraged people to civil disobedience. When the PML-N government didn’t stop the PTI and the PAT from entering Islamabad, how can the PTI government stop the JUI-F and other opposition parties from launching their “Azadi March”? Secondly, just as the PTI-PAT march began 15 months after the 2013 elections, so is the JUI-F’s march happening after the 2018 elections. In 2014, the PTI demanded that fresh elections should be held. In 2019, the opposition parties are calling for the same.

The difference between the two sit-ins is that in 2014, only the PTI and the PAT were protesting, whereas, in 2019, almost all opposition parties have united to dislodge the government.

Nothing can be said about the outcome of the planned march, but one thing is clear: such an act would further destabilise the country and weaken its economy. Can the opposition — which is quite strong unlike the PTI in 2014 — force the PM to leave office? And who will benefit from this step by the opposition?

Unfortunately, the PTI government has failed to take steps to improve the economy and governance. Instead, it has deepened the economic malaise as has been reported by the Associated Press. Citing a WEF global competitive report, it states: “With an overall ranking of 110, Pakistan was at 107 for institutions; 105 for infrastructure; 131 for ICT adoption; 116 for macroeconomic stability; 115 for health; 125 for skills; 126 for product-market; 120 for labor market; 89 for financial system; 29 for market size; 52 for business dynamism; and 79 for innovation capacity. Pakistan slipped by three spots on the Global Competitiveness Index 4.0 released by the World Economic Forum (WEF), ranking 110 out of 141 countries.”

The government tried to downplay the report with PM’s Adviser on Finance Dr Hafeez Sheikh and FBR Chairman Shabbar Zaidi claiming, during a press conference, that the fiscal deficit declined by 36% in the first quarter of the current financial year and trade deficit declined by 35% by curtailing imports. They also claimed an increase in income tax returns and now borrow from the SBP in Q1 of the ongoing fiscal year. But such claims militate against ground realities which reflect a sharp increase in unemployment and inflation.

In a recent report, “South Asia Focus Making Decentralization Work”, the World Bank presented a gloomy picture of Pakistan’s economy because of its high tax-to-GDP ratio (80%) and meager foreign currency reserves. The report also indicated a slow annual economic growth rate which may reach around 3% by 2021, while it had reached 5.8% under the PML-N government.

With these facts, it will be difficult for the PTI government to deal with the looming challenge from the opposition. The government can term the Maulana’s “Azadi March” irresponsible because of the delicate Kashmir situation, but the deep-rooted mess created over the last year and little signs of relief question the credibility of PM Imran who is surrounded by a bunch of sycophants and imprudent advisers. Opponents ask him to call it a day.

Contending with our growing water scarcity