Pakistan's debt to rise to over 78% of GDP: IMF

Pakistan's debt to rise to over 78% of GDP: IMF

Over 60% of FBR taxes to be consum­ed in debt servic­ing
By Shahbaz Rana
Published: October 16, 2019
Tweet Email 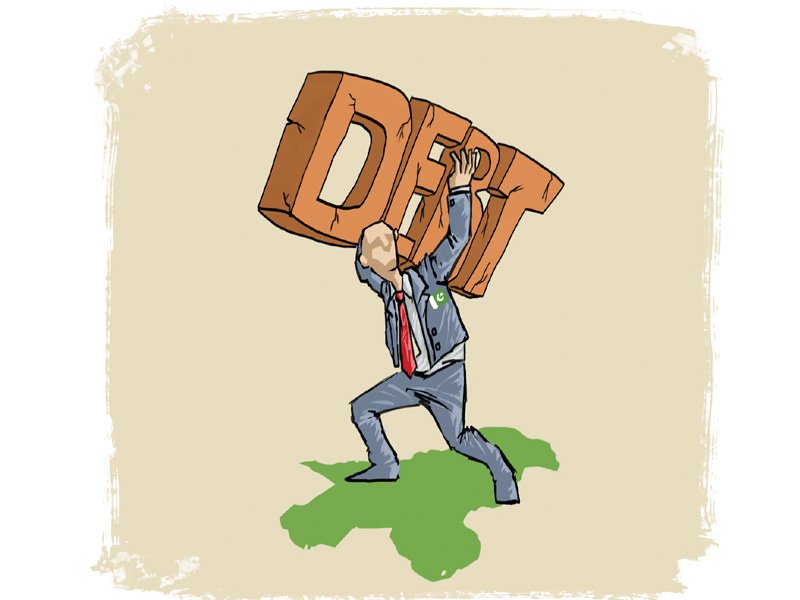 ISLAMABAD: A new report, issued by the International Monetary Fund (IMF) on Wednesday,  has said Pakistan’s public debt may surge this year to 78.6% of the total size of its economy, which is not only higher than the previous year but also in violation of an act of the parliament.

The Global Financial Stability Report further said the budget deficit -gap between expenditures and revenues, would remain at 7.4% of the Gross Domestic Product (GDP), which is also slightly higher than the official target set by the Ministry of Finance.

The higher budget deficit and public debt projections would mean that over 60% of the Federal Board of Revenue’s (FBR) taxes would be consumed in servicing the debt, which grew at an alarming rate in the last fiscal year 2018-19.

Against 76.7% public debt in the last fiscal year, the public debt may surge to 78.6% of the GDP by end of current fiscal year 2019-20. The projected level of public debt was slightly higher than the target set by the Ministry of Finance at the time of the budget. The 78.6% public debt will be equal to Rs34.6 trillion.

According to the Fiscal Responsibility and Debt Limitation Act of 2005, the public debt has to be lower than 60% of the GDP or Rs26.4 trillion. This means, the public debt will be at least Rs8.2 trillion higher than the limit set in the FRDL Act.

The IMF debt projections are lower than the forecasts given by the World Bank (WB) in its latest report, South Asian Economic Focus Fall 2019. The WB has said the public debt-to-GDP ratio is expected to remain high at 82.9% of the GDP in this fiscal year.

The WB report noted that even in the next fiscal year, the public debt to GDP ratio would remain at 80.8%, increasing Pakistan’s exposure to debt-related shocks. The key reasons behind growing public debt were low revenues, higher debt and defence spending and currency devaluation.

The Global Financial Stability Report projected the budget deficit at 7.4% of the GDP, which is 0.2% higher than the Ministry of Finance target. But the IMF report showed that the government will achieve its target of primary deficit reduction – total expenditures minus interest payments.

The report has shown the primary deficit at 0.5% of the GDP at the end of this fiscal year.

The new report has projected the general government revenues at 16.3% of the GDP for this fiscal year, which are higher by 3.5% of the GDP or Rs1.6 trillion over the last year.

At a time when the economic growth rate was sinking every year it will be difficult task to collect that much additional amount in tax and non-tax revenues in a single year.

But on last Saturday, Adviser to PM on Finance Dr Abdul Hafeez Shaikh sounded upbeat and said the government would achieve its overall fiscal targets on back of significant increase in non-tax revenues.

Against the budgeted target of Rs1.2 trillion, Shaikh hoped to collect Rs1.6 trillion in non-tax revenues in this fiscal year. The federal budget deficit that had been recorded at Rs738 billion or 1.9% of GDP in the first quarter of the last fiscal year, was brought down to Rs476 billion or 1.1% of GDP, said Shaikh.

During the first quarter, the FBR pooled Rs958 billion with an annual growth rate of 15% despite blocking exporters’ refunds and taking advances from the large firms.

The FBR also faces resistance from the traders’ associations that have so far refused to comply with the tax laws. The traders on Wednesday gave two-day shutter down strike call for October 29 and 30.

The All Pakistan Anjman-e-Tajran President Ajmal Baloch urged the IMF team to meet with the representatives of the traders.

Briefing sought on ‘denial of facilities’ in NAB custody