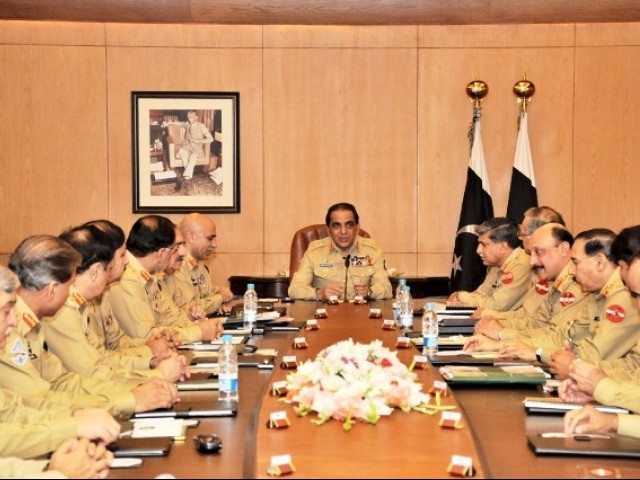 Statement was made during Corps Commanders' Conference lead by Gen Ashfaq Kayani. PHOTO:ISPR/FILE

The Pakistan Army has decided not to reverse its decision to expel US military trainers and scale back the activities of the Central Intelligence Agency (CIA) operatives in the country despite Washington’s punitive move to withhold $800 million worth of assistance.

The decision was taken at a meeting of the corps commanders chaired by Army chief General Ashfaq Parvez Kayani on Tuesday to discuss the fallout of the US step, said a military official. “We are not going to reconsider some of the decisions we have taken with regards to the activities of CIA in Pakistan,” the official said on condition of anonymity.

The security establishment, which was irked by the unilateral US raid that killed al Qaeda chief Osama bin Laden in May, launched a crackdown against the ‘CIA network’ to limit its activities.

Meanwhile, Chairman Joint Chiefs of Staff General Khalid Shameem Wynne told a top visiting US commander that Pakistan would not accept conditional aid and regretted the lack of acknowledgement by Washington for Pakistan’s “sacrifices in the battle against militancy.”

General James N Mattis, Commander US Central Command (Centcom), was on an announced trip to Pakistan to discuss regional security in the wake of recent developments. However, there was no official word if the top US general met General Kayani.

It is believed that in recent months General Kayani has made deliberate efforts not to publicise his engagements with US officials after being perceived to be too close to the Americans in the wake of the Bin Laden debacle.

A statement issued by the ISPR after the corps commanders meeting appeared to play down the US decision to suspend military assistance. “The forum reiterated the resolve to fight the menace of terrorism in our own national interest using our own resources,” the statement read.

However, it did not reveal if thousands of Pakistani troops would be pulled out from the Pak-Afghan border region if relations with the US deteriorated.

The somewhat mild reaction was attributed to the fact that the military hopes to settle the issue of withholding of aid through dialogue with American authorities, said military sources.

However, sources say, the corps commanders expressed their concern over the US decision, noting that it would not help the anti-terrorism campaign and will also cast a negative impact on the Pak-US bilateral cooperation in the fight against terrorism.

The top brass was also irked by the many strings attached to the US assistance. “No country has done more than Pakistan to eliminate al Qaeda and its affiliate groups,” said a senior military official. “Yet we remain in the eye of the storm, which is unfair.”

The official added that military commanders assert that the US must keep in mind the sacrifices of the Pakistani armed forces before making such harsh decisions.

According to an ISPR spokesman, the army chief appreciated the conduct of the ongoing operations. Referring to Mohmand Agency, he instructed that all efforts must be utilised in coordination with the civil administration for safe repatriation of the IDPs.

He said that the aim of the operation in Kurram Agency was to clear the area of miscreants involved in terrorism, kidnapping, killing of locals and blocking of roads connecting lower and upper Kurram.