'Inam can win gold at the World Beach Games'

'Inam can win gold at the World Beach Games' 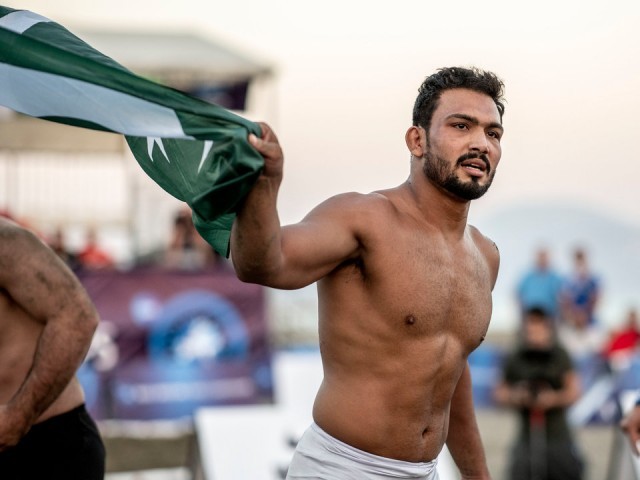 KARACHI: Pakistan’s double World Beach Wrestling champion Muhammad Inam will be competing in men’s 90kg event at the World Beach Games on October 14, and one of his student and the Youth Olympics bronze medallist Inayatullah hopes his idol wins gold in Qatar.

Inam had qualified for the 2019 World Beach Games earlier this year in May from the championship in Rio, Brazil, where he had finished runners-up to pave his way to Qatar.

But the road has been rocky as Inam did not have any national camp for preparation and he carried on training in his home-town and his wrestling gym in Gujranwala, all the while, despite lack of resources, emphasising that he wants to compete at times just to inspire the youth.

Inam has reached to World Beach Games, only Pakistani to be competing there, on self-help basis, and no support from the government.

It is the kind of struggle that Inayat, 18, feels deeply and wants to wish Inam the best.

Inayat became the first Pakistani to win a world beach wrestling championship among juniors in 2017 and Asian Championship silver medal previously. He also won Youth Olympics’ bronze in the 70kg event in 2018.

“I have seen Inam, it is all self-help, and I want to wish him the best. I want to tell him that we are looking at him and we are inspired,” Inayat told The Express Tribune. “I’ve trained with Inam too, and he is one of my heroes. I know he got no support either, but he tried. I was in awe of how he competed in Brazil to qualify for the World Beach Games, then I was in awe when he won the first World Beach Wrestling title in 2017 and then in 2018 too. I just want to send out a message to him that we are praying. And I want to tell Pakistani fans that they should support us, the wrestlers.”

Inayat, although he would want to represent Pakistan at the 2020 Tokyo Olympics as well, feels that the lack of funds is a problem and the Pakistan Wrestling Federation (PWF) can only do so much, while there had been no camp for the wrestlers.

“If wrestlers of Inam’s calibre have to do things on their own, I don’t know how difficult it is for me, however I train every day,’ said the Peshawar-based wrestler, who is training with his departmental team Wapda.

“People forget our names too, but I’m trying to make the best of the opportunities I get,” said Inayat.

He said that even for the national games that will take place this month in Peshawar, he is looking to get tips from Inam.

Inam is placed  among nine wrestlers in the men’s 90kg event. The final will take place the same day after the group rounds and semi-finals.

Inam had released a statement before flying to Qatar and he had dedicated his participation to Kashmiris. He added that he would need support from back home in his quest for gold at the World Beach Games, and to become the first Pakistani to achieve this feat.

Bale on target as Wales’ Euro hopes on knife-edge