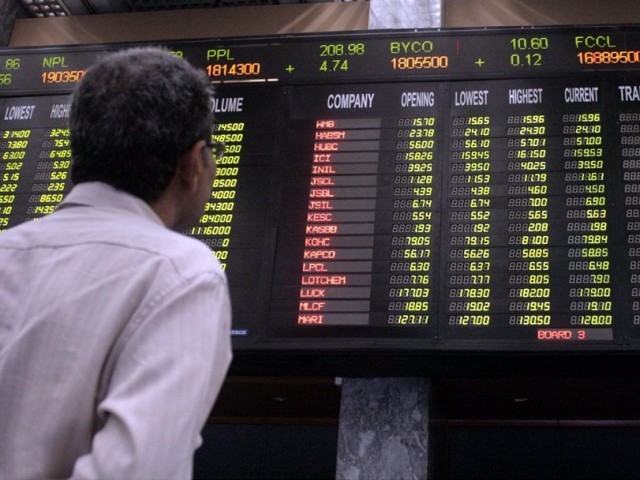 KARACHI: Bulls maintained their grip on the Pakistan stock market in the outgoing week as the benchmark KSE-100 index powered past the 34,000-point mark in a phenomenal rally. The index surged 1,442 points or 4.37% in the week and settled at 34,476 points.

“From its recent bottom of 28,765 points hit on August 16, 2019, the KSE-100 index has gained 20%,” said Topline Securities in its report. At the start of the week, trading kicked off on a positive note following the release of Asia-Pacific Group’s report on money laundering, which found Pakistan partially compliant with a majority of the issues.

This development coupled with the visit of Prime Minister Imran Khan to China acted as a catalyst for investors as sentiment improved on expectations of a positive outcome from the trip. However, the trend reversed on Tuesday as bears were back in control of the market, snapping a seven-day winning streak and dragging the index back into the red.

In Pakistan, stage set for accumulation of stocks by value hunters

The index remained under pressure over domestic economic uncertainty and a fall in global crude oil prices. Moreover, the investors also opted to book profits as the market had been trading in an overbought region.

Amid the positive developments, the domestic situation showed a different picture, particularly on the political front, as the Jamiat Ulema-e-Islam-Fazl (JUI-F) planned to organise Azadi march to Islamabad with possible support from other political parties. Furthermore, traders in Karachi announced their support for the latest strike call.

The adviser to PM on finance is expected to visit London in the coming week to discuss the possibility of an out-of-court settlement in the Reko Diq case in which Pakistan is liable to pay nearly $6 billion in damages.

Unfazed by these unfolding developments, the stock market rally resumed on Wednesday and continued for the remaining sessions as various developments prompted buying activity in different sectors.

Renewed hopes for acceleration in projects of the China-Pakistan Economic Corridor (CPEC), the setting up of CPEC Authority and the announcement of tax concessions for Gwadar Port helped build investor confidence.

Additionally, the news of an increase in cement prices in the northern region drove activity in the cement sector. Owing to the euphoria, the KSE-100 managed to cross the 34,000-point mark for the first time since July 2019 during the outgoing week.

The uptrend also came on the back of a decline in treasury bill yields in the latest auction where yields of three, six and 12-month bills fell 4 basis points (bps), 29bps and 38bps respectively. Market participants got further support from the State Bank of Pakistan governor’s remarks in which he indicated that the economy was moving towards macroeconomic stabilisation and success on the external front.

Trading activity improved as average daily volumes for the week were up 28% to 284 million shares while average daily traded value increased 42% to $56.9 million.

Foreign investors took the opportunity to book profits as they were net sellers of $4.15 million compared to net selling of $4.7 million last week. Major selling was witnessed in commercial banks ($4.56 million) and exploration and production firms ($1.73 million).

On the local front, buying was reported by companies ($3.91 million) followed by other organisations ($3.59 million). Other major news of the week included SBP reserves increasing $16 million to $7.7 billion, Pakistan eyeing Egypt’s success story in bond float, remittances dropping 1.4% to $5.5 billion in Jul-Sept and Pakistan waiting to receive foreign aid worth $21.6 billion.

Not so peachy for Pakistan’s peach growers