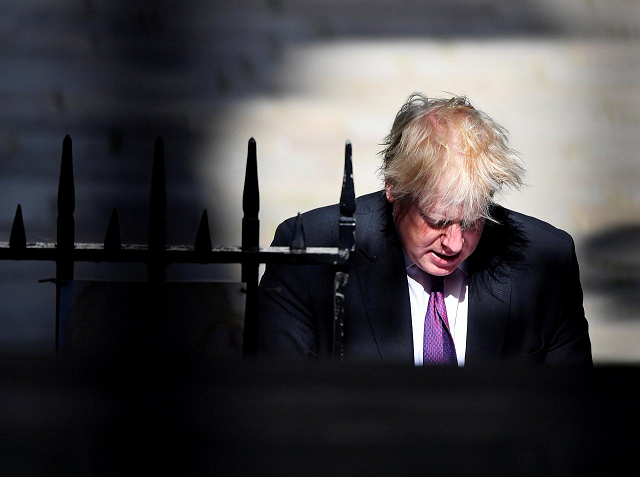 British PM Boris Johnson has vowed Britain will leave on October 31, with or without a deal. (Photo: Reuters)

LONDON: British Prime Minister Boris Johnson will on Thursday meet his Irish counterpart for last-ditch Brexit talks, with just days left to strike a European Union (EU) divorce deal and both sides blaming each other for an impasse.

Johnson will sit down with Ireland’s leader Leo Varadkar at an undisclosed location in northwest England for crunch conversations following several days of recriminations over the failure to find a compromise.

“The prime minister and the Taoiseach will meet tomorrow at lunchtime in the north west of England to discuss Brexit,” a spokesperson for Johnson’s Downing Street office said, referring to the Irish leader.

“This will be a private meeting to allow both leaders and their teams to have detailed discussions.”

Several media reports said the pair will meet in Liverpool, which has strong connections to Ireland, including freight and ferry services between the two countries which could be severely impacted by a so-called hard Brexit.

The talks come with time running out to sign off on any agreement at an October 17-18 European Union summit, ahead of Britain’s scheduled departure from the bloc at the end of the month after nearly five decades of membership.

Johnson has vowed Britain will leave on October 31 with or without a deal – despite MPs passing a law last month that requires him to seek another Brexit delay if he fails to secure a pact at the summit.

Varadkar told Ireland’s parliament Wednesday that he would work “until the last moment” to get a deal, but added: “certainly not at any cost”.

After days of trading increasingly bitter accusations of inflexibility, Britain and the EU appear to be intensifying diplomacy in a late bid to find a breakthrough.

“We’ve put forward serious proposals and have been willing to be flexible. Now it’s time for the EU to do the same,” Barclay said.

But Barnier struck a downbeat tone Wednesday, telling the European Parliament that “we’re not on the point of envisioning and finding a deal”.

Johnson and Varadkar are expected to focus their discussions on the contentious Northern Irish border, which has proved the key sticking point in the three years of tortuous Brexit negotiations.

It would take the province out of the EU’s customs union but keep it largely aligned with the bloc’s “single market” standards and regulations.

The British leader’s plans would also see Northern Irish politicians given a vote every four years on maintaining the agreed arrangements.

Brussels is adamant it will not agree to any plan that undermines the single market or leaves Ireland exposed, and that hands hardline unionists in the north a veto.