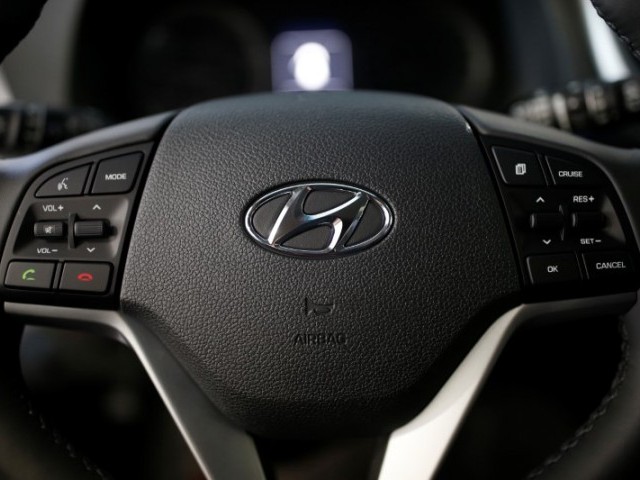 The logo of Hyundai Motor seen on a steering wheel. PHOTO: REUTERS

KARACHI: At a time when Pakistan’s auto sector is going through turmoil and existing players are slashing operational days, Hyundai Nishat Motor (Private) Limited has launched a new car along with a digital store.

Ioniq Hybrid, which has a 1.6-litre GDI engine and priced at Rs6.399 million, was unveiled at the digital store on Tuesday. In the store, customers can choose different specifications of the car through a digitised system.

He revealed that the new company would initially produce H-100 light commercial trucks with 20% local parts.

“Localisation is the only way to compete in the market because existing players already have this edge,” he said, adding that the company was aiming to use 45% local car parts in the first five years.

He was of the view that Pakistan had the potential to export vehicles to east Africa. The COO gave an example of the Indonesian market, which recorded sales of one million cars in the previous fiscal year with a total population of 264 million.

He pointed out that the Pakistan market was similar to the Indonesian market, hence, car production could be increased. “With the advent of e-commerce, new technologies are coming to Pakistan, which will soon make the country capable of producing low-priced cars,” said the COO.

Hyundai is aggressively expanding its 3S dealership network all over Pakistan. Ten 3S dealerships are supposed to be established in eight major cities in the first phase.

JS Research analyst Ahmad Lakhani said currently the situation of automobile sector was gloomy but it would not remain the same and car companies had this in mind.

He elaborated that the present situation was part of the economic cycle that experienced a slump and boom.

He was of the view that it may take longer than expected for the economy to grow but was hopeful that the buying power of consumers would grow and companies were considering the upcoming opportunities.

“Hyundai Motor Company has partnered with the Nishat group with the objective of becoming a leading manufacturer, marketer, and distributor of automobiles in the country,” he said.

He also predicted an increase in the overall car production from the existing 238,000 units per year to 500,000 units by 2025. “This may take longer but will surely happen,” the analyst said.